Noah Farley, the winner of the Tennessee Star Constitution Bee, flew to Washington, D.C. to attend a lecture delivered by United States Court of Appeals for the District of Columbia Circuit Judge Thomas Griffith at Hillsdale College’s Kirby Center for the Constitution on Thursday night. 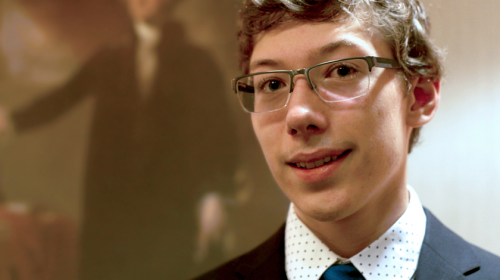 The 17-year-old homeschooled senior plans to attend Patrick Henry College in Virginia next fall. After completing his undergraduate studies, he plans on going to law school and becoming a constitutional lawyer.

The topic of the lecture was “Judicial Conservativism in a Liberal Democracy.”

According to the Kirby Center description of the event:

Bradley C.S. Watson is the Philip M. McKenna professor in American and Western Political Thought and co-director of the Center for Political and Economic Thought at St. Vincent College. He received his B.A. from the University of British Columbia, his J.D. from Queen’s University Faculty of Law, his M.A. from Claremont Graduate University, his M.Phil. from the Institute of Philosophy at the Catholic University of Louvain, and his Ph.D. from Claremont Graduate University. He is author of several books, including Living Constitution, Dying Faith: Progressivism and the New Science of Jurisprudence.

The next Tennessee Star Constitution Bee will be held in Williamson County on April 28, and is open to all secondary school students from 7th grade to 12th grade enrolled in public schools, private schools, or home school programs in the state of Tennessee.

The first place winner will earn a free trip to Washington, D.C. for themselves and a parent, and additional prizes will be awarded to second place and third place winners.