The old saying goes, you can’t have too much of a good thing; but is it really true? 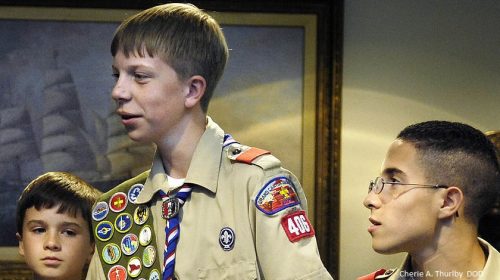 Certainly not in the case of great things like patriotism, respect for the flag or honoring your country; ditto for prime steaks, fine wine, zesty pork rub on baby back ribs and chewy chocolate brownies. But in other areas too much of what was once considered good things – at least to some – leads to strange and disastrous consequences.

Take for example this week’s announcement from the Boy Scouts of America where the organization that’s helped mold generations of our country’s young boys into flag revering, God venerating adult men declared it will now admit girls into its programs. No joke. The Boy Scouts has gone coed.

Melissa Quinn of the Washington Examiner reported, “The Boy Scouts of America announced Wednesday it will soon allow girls to join its Cub Scouts program and will develop a new program for older girls to earn the rank of Eagle Scout.”

“’This decision is true to BSA’s mission and core values outlined in the Scout Oath and Law. The values of Scouting — trustworthy, loyal, helpful, kind, brave and reverent, for example — are important for both young men and women,’ Michael Surbaugh, CEO of the Boy Scouts, said in a statement.

“‘We believe it is critical to evolve how our programs meet the needs of families interested in positive and lifelong experiences for their children. We strive to bring what our organization does best – developing character and leadership for young people – to as many families and youth as possible as we help shape the next generation of leaders,’ he continued.”

In other words an organization founded on the prospect of turning boys into men is now intent on doing the same for girls.

Surbaugh’s full statement contains not-so-subtle jabs at the Girl Scouts, too. Do the girls groups not provide the same types of experiences for females? The Girl Scouts retaliated by suggesting the Boy Scouts should be focusing on issues like sexual assault instead of opening up its doors to the female recruiting base. You can’t make this stuff up.

For those wondering where this distorted notion could have possibly originated look no further than the early 2000’s when radical feminist Martha Burk made a public spectacle out of the fact legendary private golf club Augusta National formally admitted only men as members. It seems like yesterday that Burk’s blabbering caused hypersensitive politically correct advertisers to pull their sponsorships of The Masters telecasts. Corporate America is awful petrified of the liberal lot, that’s for sure.

Instead of bowing to the left’s pressure, however, Augusta National chairman William “Hootie” Johnson revealed that the tournament would go on without any advertising rather than submit to intimidation. That’s right, no commercials. Would the NFL ever do such a courageous thing?

Johnson said at the time, “Our membership is single gender just as many other organizations and clubs all across America. These would include junior Leagues, sororities, fraternities, Boy Scouts, Girl Scouts, and countless others. And we all have a moral and legal right to organize our clubs the way we wish.”

My, how things have changed since then. If the Boy Scouts bowed to pressure from liberal parents to admit girls because the boys’ programs are “more fun,” then it won’t be long before fraternities are goaded into accepting masculine female pledges who enjoy the same stuff frat boys do, like ogling chicks and swilling beer.

In Augusta National’s situation, to make a long story short, eventually Burk’s fascist quest ceased being a newsworthy story for the easily bored media and the issue all-but died out. Years later, in 2012, only after the club’s membership made the decision on their own time and terms did Augusta National extend invitations to two women (including Condoleezza Rice) to join the most exclusive of private golf clubs.

Augusta National won the debate, perhaps, but the war was still lost. The genie of gender infiltration into male-only organizations had ineradicably entered society never again to return to the bottle. Now it’s the Boy Scouts who are turning female. Who knows what’s next? Is there anything left to ruin?

It’s only been in the last few years, after all, that the battle was waged to bludgeon the Boy Scouts into accepting openly homosexual scout leaders – which was won by the liberals, of course – so it shouldn’t be surprising with the plethora of Obama-era cultural earthquakes over transgenderism that someone, somewhere would try and sneak biological females into the previously male-only children’s club.

This sheds some doubt on the status of transgender youths in the Boy Scouts in the sense that confused boys/girls won’t necessarily have to crossover to the girls/boys side to qualify for membership in the cherished organization now. Uncertainty must be plaguing the leadership of the Boy Scouts of America as well – do you admit transgenders as boys or girls? Will they need new sex designations on their sign-up sheets to include “M,” “F” and “T/M and T/F”? Why stop there?

With a human being’s genitalia and gender identity of such great importance these days will those same scouting applications require children to specify their sexual preferences too?

How many sexual designations are there now, anyway? It used to be you were “straight/heterosexual” or “homosexual/gay.” Then they subdivided those classifications into “bisexual,” “lesbian” and “queer” (I still don’t get how that one fits in there.) Can you be transgender but still be “straight?” Can you be “bisexual” and still be “queer”? And if you’re a transgender man turned woman, does it make you a “lesbian” if you prefer women?

Will scout leaders be commanded to go over the gender manual at every campfire chat? Will condoms be passed out to stave off the inevitable biological aftereffects of mixing teenaged boys and girls together?

Maybe the spokesperson of all spokespeople, Bruce “Caitlyn” Jenner should address the subject. If he/she bravely speaks out and clarifies the confusion for the rest of us no doubt ESPN will give him/her another courage award. The rest of us will be looking on with jaws agape as he/she tries to explain how all the parts fit (no pun intended), but this is how ridiculous our world has become today.

The NFL flag controversy is another part of the absurd cultural back-and-forth over what we should or should not be doing — as if too much patriotism might be a considered a bad thing. The owners are going to meet on the subject next week and the players will have their representatives present as well.

Nick Wagoner of ESPN News reported, “When the NFL owners convene in New York next week and discuss the national anthem controversy that has taken hold of the league, they will be joined by representatives from the players’ union.

“On Wednesday, Goodell dismissed a claim made earlier in the day by President Donald Trump on his Twitter account that the commissioner ‘is finally demanding that all players stand’ for the anthem. Goodell re-emphasized to NFL Network that ‘there has been no policy change’ regarding players standing during the anthem.”

It used to be one would look to any number of mainstream specialty publications for news on political matters but these days all you have to do is click on ESPN and you’ll receive the latest on what professional athletes think about “social justice” and political topics du jour. Like an untreatable cancer the formerly total-sports network has gone completely overboard on airing out the views of the most extreme of players (as long as they’re liberals).

As would be expected the players union is vowing to stick up for the “free speech rights” of its members. Some predicted an “uproar” would ensue if players are forced by the league to stand. With all that’s happened in the past few weeks such forecasts are probably accurate.

This will almost certainly end badly. The NFL can’t possibly formulate a rule regarding the flag that will satisfy the leftist leanings of the radical small minority of its players. These players will spout off about their “First Amendment Rights,” the media will support them and the spineless league management will bend as it always does. So will many of the owners who likely will defy any dictates from the league to enforce a “must stand” policy on their players.

Whatever fans who thus far have successfully ignored the controversy will be forced to take a position – and it won’t be pretty for the NFL’s bottom line.

Likewise the Boy Scouts of America will basically cease to be as the vast majority of parents who are already fed up with political correctness will pull their male children out of the organization in droves. Competing male-only and female-only (perhaps with a more or less boy scout-like program) troops will spring up to offer parents a choice on how to provide their kids the same experience without the liberal gender confusion.

Eventually the federal courts will get involved and have to decide on the legal definition of “gender” – or in today’s parlance, gender-identity — and whether it’s discriminatory for any club to admit only one gender (or more specifically, for male-only groups to deny females).

Regardless of how the courts rule a big chunk of the population will determine it ain’t worth having their kids involved in this mess. Everyone loses; no one wins. It’s all because the culture has devolved to the point where liberals can’t even decide on the merits of obligatory gestures like saluting the American flag.

So in essence, yes, we certainly can have too much of a good thing. Everything that’s going on around us in these troubled times prove that the old days were awful darn good indeed – and they’re gone and ain’t coming back, too.

One Thought to “Commentary: Were the Old Days of Male-Only Boy Scouts Too Much of a Good Thing?”