Former Governor Phil Bredesen, the man who was the last Democrat to run and win a statewide campaign in Tennessee, is now eyeing a run for the U. S. Senate to replace the retiring Bob Corker, the AP reports:

In a statement Monday to The Associated Press, Bredesen said he is mulling an entry into the race after several people urged him to reconsider his initial statements that he had no interest in running.

“In the days ahead, I’m going to do some research, talk with people and carefully think this through,” he said. “I’ll make a decision quickly.” 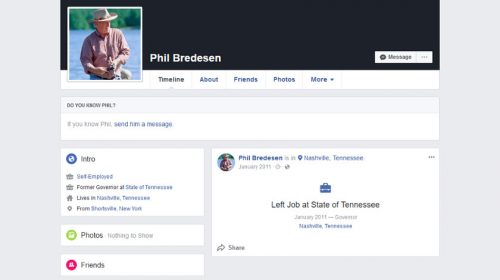 The former governor has led a relatively quiet private life since leaving public office – a time before social media. He does not appear to have a Twitter account, and an unverified ‘Phil Bredesen’ Facebook account has no entries, but the profile picture is of him, fishing.

Breseden has been complementary of incumbent Corker’s tenure, telling the AP:

“We are of different parties and don’t always agree on issues, but I have long admired the way in which he puts the interests of Tennesseans and our nation ahead of political gamesmanship,” Bredesen said. “He educates himself on the issues and thinks independently about them, in exactly the way the founders of our nation intended.”

Voters first met Bredesen in 1987 when he ran for mayor of Nashville and lost after being characterized as a carpetbagging Northerner (Bredesen was born and raised in New York). He regrouped, and in the intervening years worked on establishing relationships in City Hall. In 1991 amid a personal scandal, the incumbent mayor declined to run. Bredesen ran again and won, and ultimately served for two terms.

In 1994, while serving as Nashville’s Mayor, Bredesen ran for and won the Democratic nomination for Governor, but was defeated by Don Sundquist in the general election.

In 2002, he ran again, winning the election by a slim, but definitive margin.

Bredesen’s governorship was marked by a number of major policy shifts in the state, including the establishment of the Tennessee State Lottery, restructuring the financially imperiled TennCare, and increasing the State’s power to acquire land through the Tennessee Heritage Conservation Trust Fund.

At the end of his two-term tenure, the Tennessee legislature slipped from the Democrats’ control for the first time since Reconstruction, which set up the election of Governor Bill Haslam, a Republican.

His efforts to rehabilitate TennCare did not go unnoticed, as he was on the shortlist to be nominated as newly-elected President Barack Obama’s Health and Human Services Secretary.  In the end, however, he lost out to former Kansas Governor Kathleen Sibelius, who served as HHS Secretary until 2014.