When Tennessee defensive back Rashaan Gaulden celebrated a “pick-six” touchdown by teammate Daniel Bituli with a two-handed flip off of the Alabama student section, on national television no less, Volunteer fans everywhere cringed. The pitiful production by a once top-flight football team has been a festering wound all season, but the embarrassing display of bad sportsmanship hurt even more deeply. Mediocre football can, and likely may, be corrected with a coaching change. But a growing culture of classlessness is a more immediate and bigger issue. 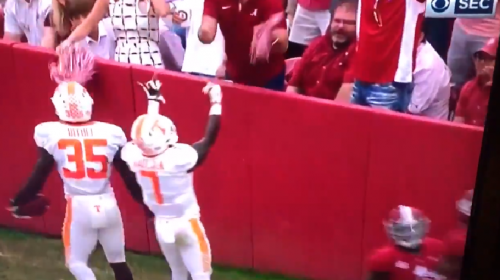 Gaulden showed up, “manned up” and apologized in the post game press conference. Even the best of kids sometimes make bad decisions, particularly in an emotional and frustrating “heat of battle” moment.

“That (gesture) that I showed was very out of character,” said Gaulden, one of the team’s best players. “That’s not how my parents raised me. That’s not how a leader of the team should show their emotion on the field, and I really sincerely apologize to the student section of Alabama for disrespecting them.” What he did on the field was wrong. What he did afterwards was exactly right.

Hopefully he, and his teammates and coaches, will learn from his mistake and grow from it.

Unfortunately, this particular incident reflects a larger problem not only for the University of Tennessee football program but for our entire culture. The thuggish, trash talking persona that has taken hold in sports at almost every level is out of control and it is past time for coaches, administrators, media and community leaders to rein it in. Sure, there are countless examples of good sportsmanship and classy competition that don’t get the attention of the occasional bad acts of a few. But that doesn’t excuse or minimize the dangerous trend of a culture of disrespect that is on the rise.

The Southeastern Conference has had a well-deserved reputation for having the best competitors on the field (and their fans in the stands) battle furiously but while showing great respect for the talents and skills of the other team. There has been a “family” bond within the SEC that has, frankly, perplexed those in other regions of the country.

Why do fans of SEC schools support and cheer for their biggest rivals during bowl season or March Madness?

How can rabid orange clad fans open their tailgate party to share chili and hotdogs with fans clad in blue on game day?

How can Alabama fans possibly do the Florida gator-chop when playing non-conference opponent Florida State?

It is partly due to regional pride. And it is largely due to the “mixed marriages” of Alabama-Auburn, Mississippi-Mississippi State, Georgia-Florida, etc. family unions.

But mostly it is a deep and abiding respect for “the game” and appreciation for great talent regardless of the color of the uniform…or the player. How else can we explain blazer clad white fraternity guys and white rednecks with Confederate flag bumperstickers on their trucks cheering like crazy for the black players suiting up for their “team”?

Sports can bring us closer together and bridge deep differences, if only for a few hours. The first black players on SEC football and basketball teams endured a lot of disgusting mistreatment and showed amazing courage in the process. They created a foundation for mutual respect and relationships that politicians could never have legislated. These Saturday games may not create bonds that last, but they can at least open a conversation…even if punctuated by occasional cheers and boos. At the very least we are united by a common distaste for referees and bad calls!

When we are so divided by so much, college football Saturdays should be a place where we can do a much better job of getting on a path of treating each other the way we should. It starts on the field, but should extend into the stands. Coaches, fans, administrators, and the media should expect and demand better of the players and themselves.

We can ALL learn something from Rashaan Gaulden’s mistake. And how he has handled it. So why don’t we?

Steve Gill is a conservative media and political analyst and frequent contributor to the Tennessee Star. He played on the 1977 SEC Championship UT basketball team.