Burchett, term-limited as Knox County Mayor, announced on August 5, 2017, his intention to run for Congress after months of speculation about which office he would run for, largely induced by his own leading comments. Since the announcement, several fund raising events have been held for Burchett and the first FEC filing of the Burchett For Congress campaign was submitted October 15, 2017. 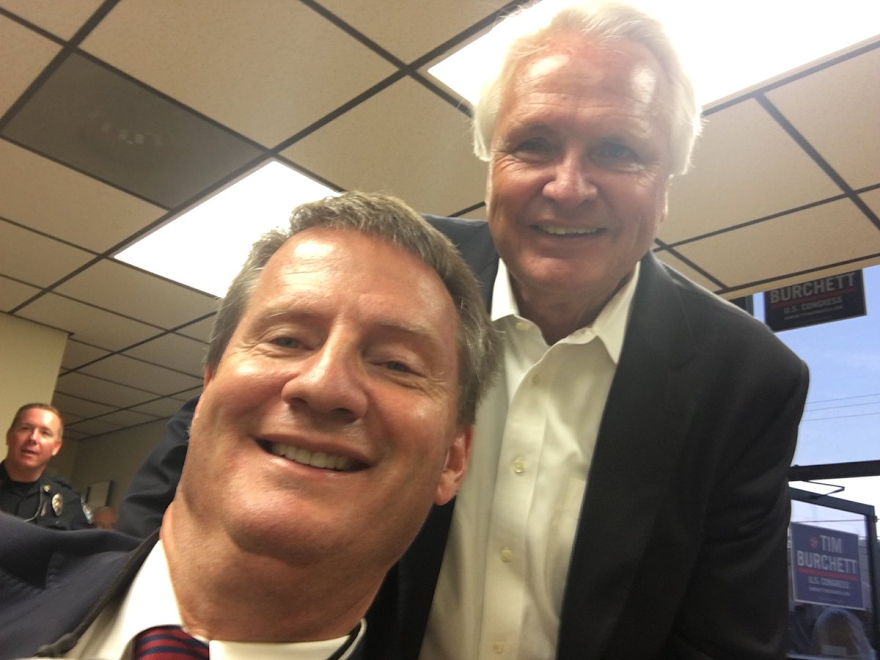 Ramsey, who introduced Burchett at a fundraiser held on September 28, 2017, the two having served together in the both the Tennessee House and Senate, repeatedly made references to “my friend, Tim.” Under Ramsey’s leadership, Republicans gained majorities in the House and Senate with Ramsey ending up as the first Republican Senate leader since Reconstruction.

Almost immediately after stepping down as Lt. Governor, Ramsey became a paid consultant to the pro-gas tax Tennessee Coalition on Transportation, a group comprised of over 30 lobbying groups supporting Governor Haslam’s IMPROVE Act. After appearing with five members of the Tennessee General Assembly during a WWTN Gas Tax Town Hall, Ramsey claimed it was “perfectly acceptable under all Tennessee laws,” although lobbying activities are prohibited for a period of 12 months after leaving the legislature.

A few months later, Ramsey, during a press conference in Blountville said that “there was some punishment levied against some House members on funding,” referring to the lack of TDOT projects in districts where House members voted against the IMPROVE Act.

More recently, it was announced that Ramsey has accepted a position lobbying for Farrar and Bates on behalf of Northeast Tennessee Association of Realtors (NETAR).

When taking the stage at the September 28 fundraiser, recognizing his friends in addition to Ramsey, Burchett called out to former State Representative, “My buddy, Joe McCord.”

Joe McCord, after serving in the State House from 1998 to 2010 was appointed by Speaker Beth Harwell as the Chief Clerk in 2011, a position in which he served until January 2017, when he announced he would be leaving the post for another position.

The announcement came after months of controversy surrounding McCord relative to his behavior toward a staffer and her two-year old granddaughter, including allegedly “flipping her his middle finger.”

During his term as Mayor, Ashe was a defendant in a lawsuit for retaliatory actions against city employees who did not support him politically, resulting in monetary damages being awarded to the plaintiffs and Ashe being prohibited from seeking another term in office.

Joan Ashe, wife of Victor, who joined in the 99th percentile for out-of-district funds with her 2016 contribution of $500 to challenger Grant Starrett in his race against Tennessee’s highest rated conservative on the Federal level, Scott DesJarlais, gave $2,600 to Burchett.

A total of $6,000 came from four Haslam family members, $1,500 each from Natalie Haslam, wife of family patriarch, James II as well as his daughter and sister to Governor Bill Haslam, Ann, and her husband Steve Bailey.

If this past year is any indication, Haslam money is capable of significant influence. Candidates for the Tennessee General Assembly who received campaign contributions from the Haslam family or Governor Bill Haslam’s JOBS4TN PAC and went on to be elected in the 2016 cycle, overwhelmingly – by a margin of over 80 percent – voted in favor of Haslam’s gas-tax increasing IMPROVE Act.