NASHVILLE, TN  – Grammy winner and music icon Kenny Rogers was inducted into the Music City Walk of Fame on October 24. The induction ceremony took place one day in advance of the all-star “All In For The Gambler: Kenny Rogers’ Farewell Concert Celebration” taking place at Bridgestone Arena. He will receive the 80th star on the Music City Walk of Fame. Inductees are recognized for their significant contributions to preserving the musical heritage of Nashville and for contributing to the world through song or other industry collaboration. 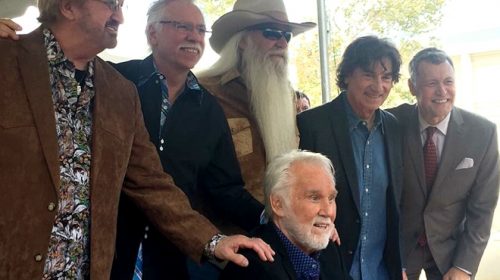 When Kenny Rogers stood to receive his honor, he was surrounded by friends and family including his wife, Wanda, sons Justin and Jordan, brothers Randy and Roy and sister, Sandy.  Rogers recalled, “I accomplished a lot more than I ever thought I would or probably should have. It really has been a great career and I have had a great life.  This, believe it or not, was the last thing on my bucket list.”  Rogers stated that he realized early on that he really didn’t have the acceptance of Nashville as his sound was quite different than that of  Johnny Cash or others who were then playing the Opry.  “So gradually music caught up to me and they were nice enough to put me in [the Walk of Fame].” 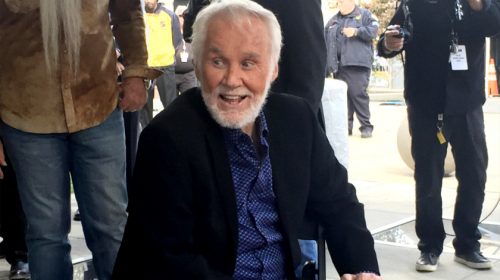 In Rogers’ nearly six decades on the charts, the Country Music Hall of Fame member and pop superstar has notched chart-topping songs, including “The Gambler,” “Lady,” “Islands In The Stream,” “Lucille,” “Coward of the County,” “She Believes In Me,” “Ruby, Don’t Take Your Love To Town,” “We’ve Got Tonight,” “Daytime Friends,” “Through The Years,” “Love Will Turn You Around,” “You Decorated My Life,” “Crazy,” “Every Time Two Fools Collide” and “Buy Me A Rose.”   The Opry’s 650 WSM Bill Cody stated that “Kenny Roger’s songs are truly timeless.”

The “All In For The Gambler: Kenny Rogers’ Farewell Concert Celebration” will take place on Oct. 25 concert and feature the final live performance together by Rogers and Dolly Parton. Other guests will include The Flaming Lips, Jamey Johnson, Elle King, Alison Krauss, Lady Antebellum, Little Big Town, Idina Menzel, Reba McEntire, Chris Stapleton and Wynonna Judd. 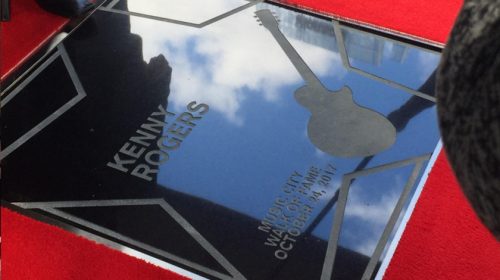 Rogers has sold more than 120 million albums worldwide, topped the charts for nearly six decades, famously been a duet partner with Dolly Parton, is a New York Times best-selling author, appeared in movies and participated in the historical USA For Africa recording of “We Are The World,” the multi-celebrity performance that raised millions of dollars for famine relief in Africa.

Rogers has charted a record within each of the last seven decades (the ’50s, ’60s, ’70s, ’80s, ’90s, 2000s, 2010s) while sending 24 songs to the No. 1 spot on the charts. With more than 120 million albums sold worldwide, he is one of the Top Ten Best Selling Male Solo Artists of All Time, according to the RIAA. Rogers has won many awards for his music, including three GRAMMY Awards, 19 American Music Awards, 11 People’s Choice Awards, eight Academy of Country Music Awards, six Country Music Association Awards (including the CMA Lifetime Achievement Award in 2013) and the Artist of a Lifetime Award at the CMT Artists of the Year 2015 award show. 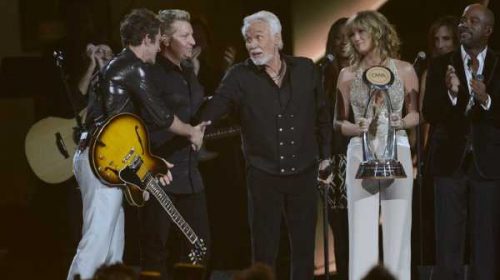