The University of Tennessee-Knoxville will hold a pro-abortion event Monday called “Abortion is Normal.”

The event was organized by the Women’s Coordinating Council, a feminist student organization, and is supported by the Department of Sociology and the Women, Gender and Sexuality Program. Planned Parenthood of Middle and East Tennessee is promoting the event. 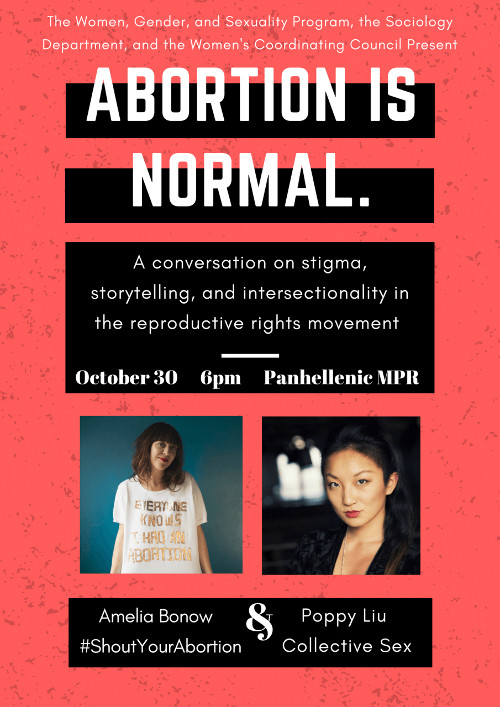 Amelia Bonow, a founder of the #ShoutYourAbortion movement, and Poppy Liu, who documented her abortion story in a short film, are the guest speakers. At Middle Tennessee State University on Thursday, the Planned Parenthood-affiliated student group Generation Action hosted a screening of Liu’s film and a discussion with the filmmaker.

Bonow’s movement was launched two years ago in response to efforts to defund Planned Parenthood after news broke of a baby body part trafficking scandal. Bonow wrote a column for Salon.com in which she spoke of her own abortion experience. “My abortion made me happy,” she wrote. “It’s perfectly reasonable to feel happy that you were not forced to become a mother. Your life belongs to nobody but you; don’t ever let someone make you feel any other way.” Pro-lifers responded with messages with a  #ShoutYourAdoption hashtag and calls to Shout Your Baby.

University of Tennessee-Knoxville spokeswoman Karen Simsen told The Tennessee Star that “our campus is a marketplace of ideas.”

“Part of our educational mission is to expose students to a variety of beliefs and opinions so that they can exercise their critical skills and make up their own minds about important and controversial issues,” Simsen said. “For any given event, we would encourage people who hold viewpoints opposed to the speaker’s viewpoint to attend the event and engage in debate and discussion of the issues.”

Simsen pointed out that two years ago, the Women’s Coordinating Council brought a feminist speaker to campus who spoke about being pro-life. In addition, the Pro-Life Collegians, another student group, annually bring to campus representatives from the Center for Bio-Ethical Reform, Simsen said.

“Student organizations, faculty, and university units invite hundreds of speakers to campus each semester,” Simsen said. “We do not deny invitations to speakers because of their viewpoint. The university does not take a position or endorse one speaker’s or group’s views over another.”