The Franklin Theatre on Sunday will screen the 2007 Emmy-award winning documentary The Battle of Franklin.

After the rare showing of the Civil War film, there will be a brief panel discussion on the historic battle, the making of the movie and preservation efforts. 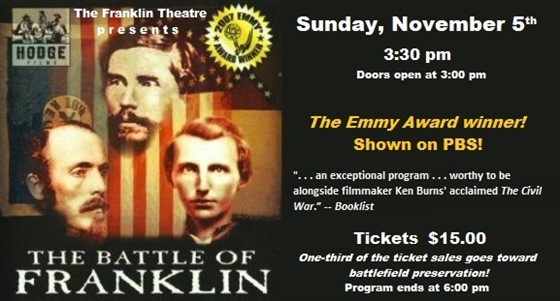 Produced and directed by Robert Lee Hodge, the documentary portrays Confederate General John Bell Hood’s struggle to gain control of Tennessee from Union forces. The 1864 Battle of Franklin is related through the actual thoughts and words of the soldiers who experienced the bloody and decisive conflict.

The movie was partially filmed on the original battlefield.

Ed Bearss, chief historian emeritus of the National Park Service, has said the film is “one of the best, if not the best, documentaries I have seen on a Civil War battle.”

“Not since Ken Burns’ monumental PBS production, The Civil War, have I seen better,” Bearss said.

Hodge gained famed as one of the Civil War reenactors profiled in Tony Horwitz’s book Confederates in the Attic. A photo of Hodge appeared on the cover. Horwitz first wrote about Hodge for a Wall Street Journal article.

At age 9, Hodge already had an idea of what he wanted to accomplish, according to his website. His mom asked him what he wanted to do when he grew up and he said he wanted to be an art director on Civil War films. He had just seen the remake of The Red Badge of Courage.

Doors open Sunday at 3 p.m. and the movie starts at 3:30 p.m. Tickets are $15. A third of proceeds from ticket sales will go toward protecting the Franklin battlefield.

For more information and to purchase tickets online, click here.