Officials at the University of Tennessee at Martin confirmed to The Tennessee Star on Friday that a faculty member has been placed on leave for writing a threatening letter to the student sponsors of a controversial Student Government Association resolution that would allow students to have constitutional concealed carry privileges on campus, pending the passage of enabling state legislation.

“Yes, we have been looking into this since Wednesday afternoon when a student contacted Public Safety,” Scott D. Robbins, Director of Public Safety at U.T. Martin, told The Star Friday morning:

We did find out who the professor was that wrote the letter in just a few minutes. The faculty member who admitted to composing the letter has been placed on administrative leave with pay. He has been cooperating with our department and university administration. I presented the letter and report to our District Attorney Tommy Thomas and there are no plans to file criminal charges.

The faculty member is under a directive not to return to campus, which is customary in an employee being put on administrative leave. The chancellor of our university is out this week for the Board of Trustees meeting in Knoxville but I understand he is going to meet with the faculty member when he returns next week.

But U.T. Martin officials were quick to offer absolution to the offending faculty member.

“The letter was determined early on to be part of a class exercise and not a threat,” Bud Grimes, Chief Communications Officer for U.T. Martin in the Office of University Relations, told The Star Friday morning.

The letter was titled “An Open Letter to Students of the University of Tennessee at Martin Re: Conceal and Carry on Campus for Students,” and it was “From: Dr. Wesley Sniper, Karl Marxmanship Professor of Culture.” It included the following highlights, addressed to the students on campus:

Now that you’re considering passing a resolution allowing concealed weapons for students on campus, I welcome the challenge!

Since Andy Holt shoved his big-government legislation down our throats last year permitting faculty to have weapons on campus, I have spent the time amassing several of these in my arsenal. They’re hidden in the (really big) filing cabinet by my desk. I have an M2HB 50 Cal. Machine gun, a Stoner AR-15, an HK416 assault rifle, and in case of ambush, a few frag grenades and a flame thrower I got from by brother-in-law, a Desert Storm vet.

I hope you’re grateful for my support of S.R. 1704, “A Resolution to Allow Students to Concealed Carry on Campus.” If you pass it, it might be the last useful thing you do–before I call in the air strike. That, or maybe one of your conceal-and-carry classmates has a bad day and takes it out on ten or twenty others before you’re quick on the draw to stop it. (emphasis added)

You can see the threatening letter written by the U.T. Martin faculty member here: 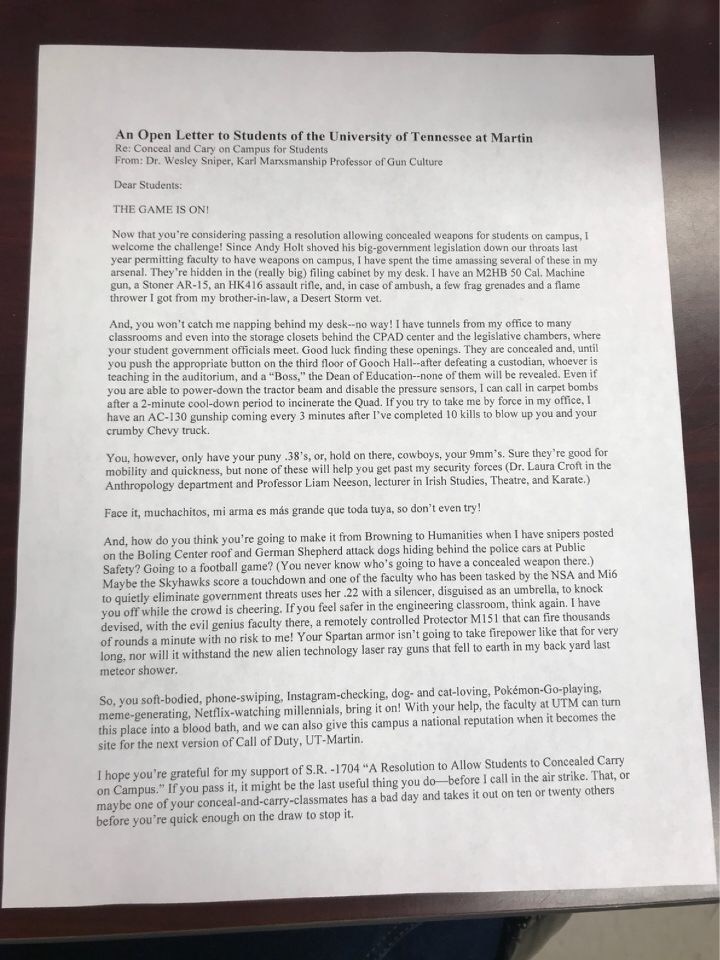 The vote on Thursday night in the Student Senate to table the resolution was 13 to 12.

With that vote, the adoption of the resolution will now be determined by a student referendum to be held on campus December 5th.

Alex Joyner, a senator in the Student Government and sponsor of the student concealed carry resolution, told The Tennessee Star that he forwarded a photograph of a letter which contains a threat to the sponsors of the resolution to the school’s administration earlier this week.

Joyner, who is also State Chair of the Tennessee College Republicans, told The Star how the concealed carry resolution has moved through the U.T. Martin Student Government Association’s process.

“I am a senior here at U.T. Martin. This is my first year at SGA. I currently serve as the Campus Operations Committee chair,” Joyner told The Star on Thursday before the Student Senate vote.

“We wrote a resolution to propose students to carry on campus. We had some trouble on campus last year. It ended up there was a shooting off campus. I don’t have to tell you the atmosphere of college campuses today. I would feel safer if I would be able to carry,” he added.

“But it came through committee this past week, where it passed unanimously. Then it passed Freshman Council 11 to 8,” Joyner said, explaining the build up to Thursday’s vote.

“The faculty has done pretty much everything in their power to stop this,” he added.

On Thursday night, the Student Senate debate “was pretty hostile” on the part of opponents of the resolution prior to the vote to table it, Joyner told The Star after the vote.

Still, Joyner is optimistic supporters of the resolution will be able to rally student support to ensure its passage in the December 5 referendum, though he acknowledges both sides will be working hard to get out the student vote.

The passage of S.R. 1704, “A Resolution to Allow Students to Concealed Carry on Campus,” by the Senate of the Student Government Association at U.T. Martin, or the passage of the resolution in the December 5 student referendum, would set the stage for a potential battle in the 2018 session of the Tennessee General Assembly.

Tennessee law currently prohibits students from carrying guns on campuses. Faculty members and staff, however, are allowed to concealed carry, thanks to a state law championed by State Rep. Andy Holt (R-Dresden) that recently went into effect.

3 Thoughts to “Concealed Carry Resolution by Students at UT Martin Sparks Threat from Faculty Member Now on Leave Who Administration Refuses to Identify, Claims It Was ‘A Class Exercise’”