The Republican Leadership of the Tennessee House of Representatives recently provided the Tennessee House Republican Caucus with a detailed and mandatory “Due Schedule,” specifically stating that “the contribution amounts are required by each member” of the caucus, along with a warning of potential reprisals for not following the “pay-to-play” directive, a source with direct knowledge tells The Tennessee Star.

The Star is in receipt of the “Due Schedule” document that came out of a late August Sunday morning Republican House Member Caucus meeting, the timing of which coincided with Sunday worship and summer vacation for many.

The “Due Schedule” cites that every Republican House Member must pay dues of $1,000 each. With Republicans holding the super majority 74 of 99 seats, the baseline Member dues results in an initial fund raising total of $74,000 for the Caucus. 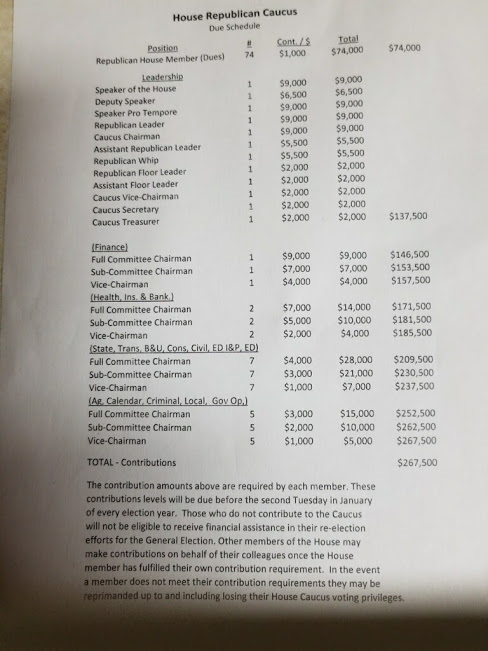 Dues for each of the twelve “Leadership” positions, to be paid in addition to the Member dues, are itemized as follows:

Committee Chair and Vice Chair dues, paid in addition to the $1,000 Member dues and Leadership dues for just one Member, vary by the specific Committee, broken into four tiers by some apparent level of importance or influence, as seen below:

The required contribution amounts are accompanied by a warning.

“Those who do not contribute to the Caucus will not be eligible to receive financial assistance in their re-election efforts for the General Election,”the memo states, adding:

In the event a member does not meet their contribution requirement they may be reprimanded up to and including losing their House Caucus voting privileges.

Perhaps more revealing and egregious than the pay-to-play message from the Due Schedule, is the tone and substance of the accompanying verbiage and its implication that duly qualified and elected Republican Representatives will not have a voice within the Republican Caucus.

The Tennessee House of Representatives Permanent Rules of Order dictate that the Speaker appoints Committees and Committee officers and, in doing so, “the Speaker shall consider the abilities, preferences and seniority of members and the political party representation in the House.”

The House Committee process, with its voice votes and resulting significant discretion for Committee Chair rulings on the outcome, undermines our representative form of government and lacks transparency. Since virtually every piece of legislation passes through the Committee process, and individual votes are not recorded unless specifically requested, the 28 House Committee and Subcommittee Chairs wield a great deal of power in determining the outcome of bills.

In addition to the Leadership-appointed Committee Chairs and Vice-Chairs, this pay-to-play requirement established by House Leadership has the effect of diminishing the voice of the 67,000 voters in each of the 99 House districts by essentially excluding some House members in more rural or economically challenged districts from having the high-priced additional campaign funds to pay the required Caucus dues.

Conservative House members may also find it challenging to raise the required funding for Leadership and Committee Chair positions, when the lobbyist and PAC money is made available instead to more moderate House members who are perceived as having a higher likelihood of voting in favor of Leadership and special interests.

The pay-to play-scheme can create a continuous cycle in which those legislators who are in more powerful leadership positions receive higher campaign contributions, which allow them to maintain or move up the Committee and Caucus Leadership ladder.

A Sunlight Foundation study of the 103rd to 111th U.S. Congress on the fundraising potential by committee showed that three committees in particularly – Ways and Means, Financial Services and Energy and Commerce – stood out as being “particularly lucrative” when it comes to the “bonus” that comes to members from individual itemized and PAC fundraising.

The Due Schedule mandates that the Republican Caucus member contributions “will be due before the second Tuesday in January of every election year.”

The timing puts an added burden on incumbent Republican candidates with a primary opponent who would not be subject to the dues or the restriction against fund raising during legislative session.

The incumbent would have no opportunity to receive any financial benefit from the Caucus dues they paid until the General Election. And, even at that, there are no guarantees that the financial assistance will come, as that is yet another decision made by the Caucus Leadership.

With more than two dozen House seats open or contested in 2018, discerning voters will have an extraordinary opportunity to vet and select candidates who are committed to transparent, equal representation.