It’s been a busy day for Republicans on The Hill, as the tax reform package promised by then-candidate Trump and touted by now-President Trump, is finally introduced to Americans. 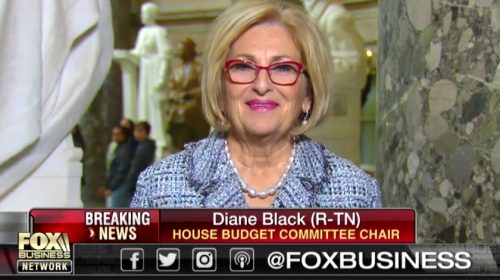 While the details of the proposal are yet to be fully understood, the Republican House leadership team that produced the work took a bit of a victory lap Thursday with the President. Among them is the House Budget Committee Chair, Representative Diane Black (R-TN-06), who is also running to replace outgoing governor Bill Haslam.

During a press availability at the White House Thursday, President Trump made sure to single out Rep. Black individually for her role to both pass the budget and the create the tax reform bill. “I called Diane Black and you came through, Diane,” he said, shaking her hand as Speaker Paul Ryan looked on.

In a separate statement from the White House, President Trump said, “I applaud the House Ways and Means Committee for introducing the Tax Cuts and Jobs Act, which is another important step toward providing massive tax relief for the American people. My tax reform priorities have been the same since day one: bringing tax cuts for hardworking, middle-income Americans; eliminating unfair loopholes and deductions; and slashing business taxes so employers can create jobs, raise wages, and dominate their competition around the world.”

The policies of my Administration have already helped to drive the stock market to all-time highs and the unemployment rate to a 16-year low. Economic confidence is skyrocketing and our GDP grew 3 percent yet again this quarter.

We are just getting started, and there is much work left to do. The special interests will distort the facts, the lobbyists will try to save their special deals, and some in the media will unfairly report on our efforts. But my Administration will work tirelessly to make good on our promise to the working people who built our Nation and deliver historic tax cuts and reforms — the rocket fuel our economy needs to soar higher than ever before.