HENDERSONVILLE, Tennessee – John Rose declined to participate in a public forum here at VFW Post 9851 on Thursday with State Rep. Judd Matheny (R-Tullahoma), his opponent for the Republican nomination in the 6th Congressional District race in 2018 to succeed Rep. Diane Black (R-TN-06), who is running for governor. 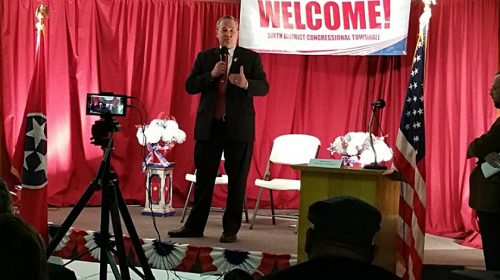 The Hendersonville event was one of four similar forums around the district that Rose will not be attending.

In a letter dated October 31 and received on the day of the first forum, Rose declined participating in any of the upcoming forums, as he is “currently focused on meeting and listening to the voters of Tennessee’s Sixth Congressional District,” adding that “there will be a time for forums and debates,” and

At the appropriate time, I look forward to a forum sponsored by a well-established, independent, reputable organization.

Rose’s letter declining the invitation did not elaborate on what he considered to be a “reputable organization.” 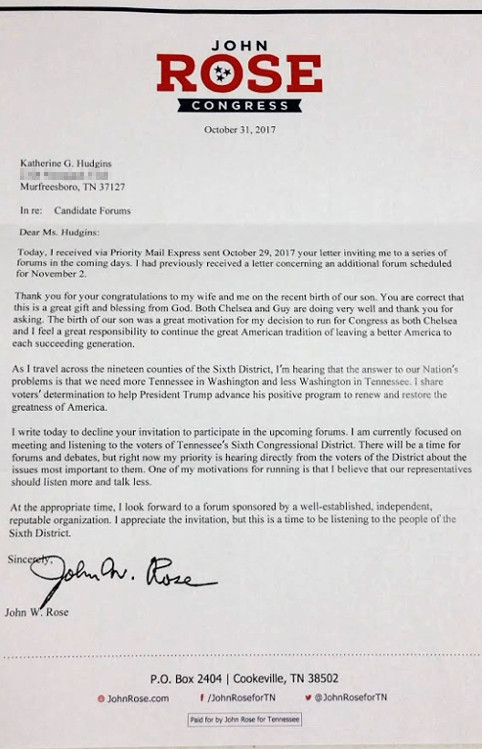 When the formal program began, Matheny made an opening statement, then took organizer-prepared questions from the moderator, Lipscomb University political science Assistant Professor Marc Schwerdt, as well as several submitted by attendees, before making his closing remarks.

The questions covered a wide range of topics including sanctuary cities, immigration, “Constitutional carry,” and qualifications for the office.

About 40 people attended the forum.