Rene Boucher, the 59-year-old doctor and inventor who was arrested for assaulting Sen. Rand Paul (R-KY) in his Bowling Green, Kentucky home on Saturday, donated $100 to his Democratic opponent, Jack Conway, in the 2010 U.S. Senate election.

Federal Election Commission records show that Rene Boucher, an anesthesiologist employed by Interventional Pain Specialists, donated $100 to Conway for Senate in 2010. The contribution was made through the leading liberal fundraising website, ACT BLUE, a qualified PAC based in Massachusetts, on September 26, 2010, and was specifically “earmarked for Conway for Senate.” 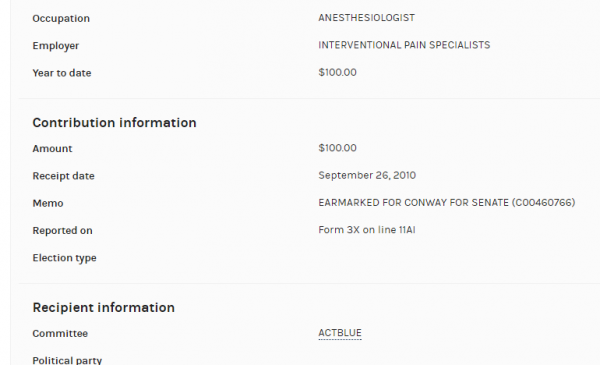 ACT BLUE is used by leading left wing Democrats to raise funds nationally, the most prominent of which include Senator Elizabeth Warren (D-MA) and Senator Bernie Sanders (I-VT).

He was easily re-elected in 2016 over Democratic opponent Jim Gray, winning by a 57 percent to 42 percent margin.

The details of Boucher’s assault on Paul in his private residence on Saturday or both bizarre and disturbing, as The Tennessee Star reported on Saturday:

Senator Rand Paul was a victim of a home invasion assault in his Bowling Green home Saturday afternoon, sustaining what police describe as ‘minor injury.’

The Bowling Green Daily News reports reported Paul spokesman Kelsey Cooper said in a statement, “Senator Paul was blindsided and the victim of an assault. The assailant was arrested and it is now a matter for the police. Senator Paul is fine.” . . .

Dr. Boucher is an anesthesiologist (retired), osteopath, and inventor who lives in a nearby neighborhood, according to publicly available records. He is currently being held in the Warren County Region Jail.

NBC News added this report late Saturday to what is known about the assault:

NBC affiliate WAVE of Louisville reported that the two men are neighbors. A neighbor told the station that the two men have had ongoing problems and Paul was mowing the lawn at the time of the assault.

A state police spokesperson would not confirm those details, but said Paul and Boucher are acquainted with one another.

The Republican senator sustained a minor injury, state police said. An ambulance was not required.

The Kentucky State Police confirmed that the FBI were involved in the investigation, but the ongoing probe will be led by the trooper who made the arrest.

Saturday evening, Politico added this report on the incident:

Sen. Rand Paul (R-Ky.) was assaulted by his neighbor at his Bowling Green residence, police say, an altercation the suspect admitted to a Kentucky State trooper, according to an arrest warrant obtained by POLITICO on Saturday.

According to the warrant, Paul was tackled from behind by his neighbor, Rene Boucher, 59, at 3:21 p.m on Friday. The senator was “blindsided” but is “fine,” a spokesperson for Paul said.

Boucher’s altercation with Paul left the senator having difficulty breathing as a result of a “possible rib injury” in addition to bleeding from cuts around his mouth. Paul was seeking medical help for his injuries, the warrant said. . .

Boucher, according to the warrant, admits to going onto Paul’s property and tackling him. Neither the warrant nor a charging document written by a Kentucky State trooper describes what preceded the incident. The charging document has a field for offenses suspected to be related to drug or alcohol use, but those boxes are unchecked.

“Boucher is an anesthesiologist and pain specialist,” Heavy.com reported:

He got his medical degree from Des Moines University College of Osteopathic Medicine after being pre-med at Providence College in Rhode Island, according to Doximity. Boucher has practiced medicine since 1982 and attended high school in New Bedford, Massachusetts. Between 1985 and 1993, Boucher was a pain management specialist at the Letterman Army Medical Center in San Francisco where he also did his residency.

In 2005, Boucher appeared on QVC marketing a rice-filled vest that was designed to alleviate back pain, reported the Bowling Green Daily News. The vest retailed at $30 and had to be microwaved before use. The website for Therm-a-Vest is no longer active. WAVE reports that Boucher retired in 2015.

In May 2017, Boucher shared a story on Facebook about Republican Congressman Greg Gianforte assaulting The Guardian’s Ben Jacobs in Bozeman, Montana. The assault was described as a “body slam” at the time.

Boucher is a registered Democrat. He is shown through Facebook postings to be high critical of President Donald Trump, an advocate for gun control and healthcare reform.

If convicted on the assault charges, Boucher faces up to a year in prison.