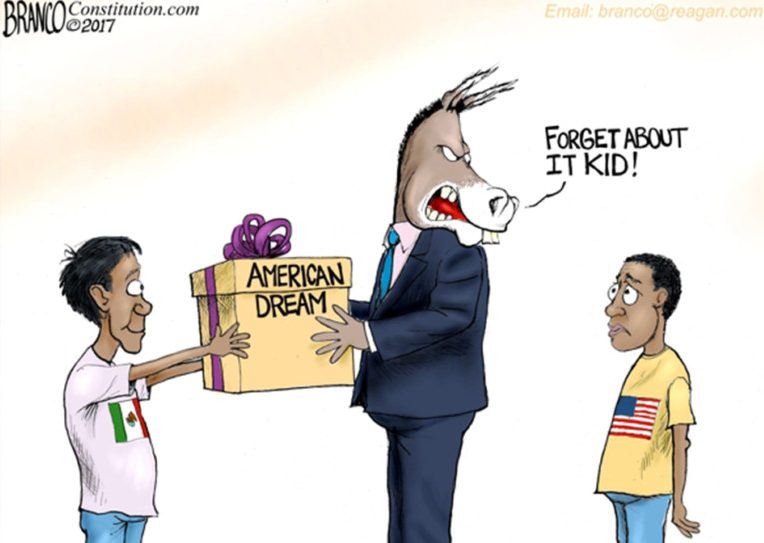 Current U.S. immigration policy is based on family reunification. This includes immediate relatives of U.S. citizens, a separate category from the families of legal permanent residents. Immediate relatives include spouses, children under 21, and parents.

But family reunification of immigrant arrivals in addition to U.S. citizens has also been a basis for admitting immigrants, but the priority went to the highly-educated and skilled. The promotion of family reunification originated with the 1952 Immigration and Nationality Act (INA). The INA established a hierarchy of family-based preferences, like parents, adult children, and adult siblings. However, priority still went to highly-educated or skilled immigrants.

The Immigration Act of 1965 (Hart-Celler Act) was the next piece of legislation to influence chain migration. The bill went beyond simply promoting family reunification and made it the priority of U.S. immigration policy. Chain migration categories now had preference over skilled and highly-educated immigrants. Restrictions were set at 170,000 per year.

The Immigration Act of 1990, S. 358 introduced by Sen. Ted Kennedy (D-Mass.), was the next significant piece of immigration legislation to effect chain migration. Family reunification not only remained the priority for U.S. Immigration policy in the bill, the numbers were substantially increased. It allowed 700,000 immigrants to come to the U.S. per year for the fiscal years 1992–1994, and 675,000 per year after that.

Although there a limited number of immediate family members a lawful permanent resident can bring into the U.S., once that person becomes a U.S. citizen, it becomes unlimited. That’s why it is called chain migration.

Theodore M. Hesburgh warned of the dangers of chain migration in Final Report: U.S. Immigration Policy and the National Interest for the U.S. Select Commission on Immigration and Refugee Policy stating, “Assume one foreign-born married couple, both naturalized, each with two siblings who are also married and each new nuclear family having three children. The foreign-born married couple may petition for the admission of their siblings. Each has a spouse and three children who come with their parents. Each spouse is a potential source for more immigration, and so it goes. It is possible that no less than 84 persons would become eligible for visas in a relatively short period of time.”

It may not seem like much when talking about a country of over three hundred million people; the numbers can make up sizable portions of the U.S. population. A recent report from NumbersUSA, looking at chain migration, stated, “Over the last 35 years, chain migration has greatly exceeded new immigration. Out of 33 million immigrants admitted to the United States from 1981 to 2016, about 20 million were chain migration immigrants (61 percent).”

The report also notes the age problem facing chain migration. Since the 1980s the rate of family migrants over 50 has increased by 24 percent. Now, over 1 in 5 new migrants that come into the country via chain migration is over 50. What do people over 50 often need from the government? Government healthcare and Social Security. Can a government running a deficit of hundreds of billions per year while being $20 trillion debt afford to add millions of people to the taxpayer dime?

Now that you know what chain migration is, let’s look at how it works. Let’s say a young man (23) from India with a computer science degree, speaks English and wants to come to the U.S. to make his fortune.

You also have a couple, each in their 50s, from Mexico. Because of the inadequate education system in Mexico, neither has reached a very high education level. But, one of their children was granted amnesty in 1986 by President Reagan.

Who is more likely to get the chance to come to the U.S.? Thanks to chain migration, the elderly couple is. How is that fair? How many million immigrants have the skills and education needed by the U.S. economy, but have been denied access to the U.S. because they don’t have a family member here?

And those policies have disproportionately favored one country, says Americans for Limited Government Vice President of Public Policy Robert Romano, citing Department of Homeland Security data. “From 1986 to 2015, the U.S. has taken in 29 million immigrants. 6 million or more than 20 percent were from Mexico alone. A country that comprises less than 2 percent of the world’s population made up more than one-fifth of all U.S. immigration. Nearly all of that was the 1986 amnesty and then the family-based preferences for those who received the amnesty.”

Romano added, “Because of the 1986 amnesty plus chain migration, the Mexican share of overall immigration rose from 11 percent in 1986 to 51 percent by 1991 before tailing down again. In 2015, 15 percent of all immigrants were from Mexico alone. 96 percent of Mexican immigrants are family preferences for either U.S. citizens or lawful permanent residents… Hardly any of the employment visas go to Mexicans, with just 1,200 on the 107,000 waiting list, just 1 percent, whereas there are 1.3 million Mexicans are on the family waiting list out of 4.3 million, more than 30 percent.”

The visa lottery program will almost certainly continue to be in the headlines. Members of Congress will introduce legislation to eliminate the program but will ignore the chain migration elephant in the room, which now President Donald Trump is calling for an end to. Chain migration is the real danger to the U.S., and any bill dealing with immigration must return the U.S. to an Immigration policy based on education and highly desirable job skills.

Printus LeBlanc is a contributing editor for Americans for Limited Government.

Reprinted with permission from NetRightDaily.com

4 Thoughts to “Commentary: The Real Immigration Battle Is Going to Be Over Chain Migration”