This is a picture that is four years in the making, but to understand the story is really a bond between a student and a trusted teacher. Jay Shin is a senior at Walker Valley High School in the Bradley County School System in Tennessee.  Joel Swartzel is Special Education teacher in the system.

Jay is a bright, articulate student who has a real joy for life. He has an infectious smile and comes to school every day with a carpe diem attitude. He is not the type of kid who let’s things “get him down.” He faces every day with a smile and has that rare type of courage that draws other people to him. He doesn’t allow what you see to define him and when you experience that kind of optimism in the face of cerebral palsy, you know you have a special young man on your hands. This is a glimpse into the Jay Shin part of the story.

Four years ago, a former student teacher at Walker Valley was able to land his dream job. Joel Swartzel is a Special Education teacher, and when Jay’s teaching assistant was absent, Mr. Swartzel stepped in with the daily coordination of Jay’s logistics, getting him to class and assisting him with his needs throughout the day. A friendship began to form between the two, and Jay told Mr. Swartzel he always wanted to wear a costume for the Homecoming week festivities, which includes character day at the school. 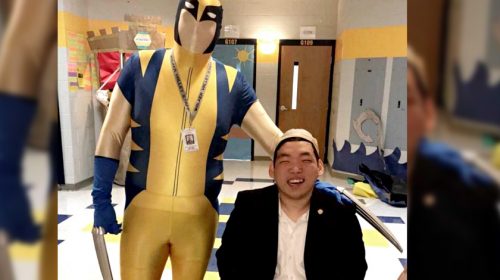 Each year, some impediment kept Jay or Mr. Swartzel from being able to dress up for the Homecoming activities. Mr. Swartzel would either have to be off campus on character day for training or Jay didn’t want to be in a suit all day long. He wanted to be Professor X from the X-Men movie. He thought he needed someone to be an X-Man to be with him. Professor X, played by the well-known actor Patrick Stuart is bald, and also is in a wheelchair.

This year, Jay’s senior year, Mr. Swartzel told Jay that if he would wear the suit, he would make sure there was an X-Man to be with him. Little did Jay know, Mr. Swartzel went to the costume store and bought the X man character “Wolverine” costume and a bald skin cap for Jay. On the day of Homecoming Character Day, Jay came to school in a suit and on his way in from the bus, there stood “Wolverine” to take him to class. As you can see, the costume is impressive but you cannot clearly see the face. The only clue is the teacher badge that he wears proudly. From the smile on Jay’s face, you can see that he will never forget this day. I can guarantee the smile on that teacher’s face is just as wide.

The heart of this story is the investment of a teacher into the life of a student. In Tennessee, every day, more than 67,000 teachers walk into our public schools, ready to tackle the responsibilities of investing in the lives of almost a million students. Their time and giving hearts in things big and small are game changers for many young people. And if the truth is told, our students usually inspire us as much as we inspire them.

Joel Swartzel said “Originally I was supposed to be Beast, but I could not find the costume in time. With this being Jay’s last year I was going to do whatever it took to make this happen. Jay is one of those kids that everyone should try to be in life. He is a joy to be around and makes everyone around him smile. When Mr. Swartzel had to opportunity to do for Jay what he does for everyone else, zero chance he was passing that up.” Thank you to Jay Shin for inspiring your teacher.

As educators, we understand this on so many levels. Even though the “rigors of the profession” are great, the moments like this help us remember why we do what we do. We make a difference every day! Thank you Joel Swartzel for reminding us of that!

– – –
JC Bowman is the Executive Director of Professional Educators of Tennessee, a non-partisan teacher association headquartered in Nashville, Tennessee. Permission to reprint in whole or in part is hereby granted, provided that the author and the association are properly cited. Follow him on social media via Twitter at @jcbowman.