Republicans in Congress should be paying very close attention to the results in Virginia, where Ed Gillespie lost the gubernatorial race to Ralph Northam, and learn the right lesson for a change.

Political parties serve very much as a function of their standard bearers, which is who voters will rally to. Right now, that standard bearer for Republicans is President Donald Trump, who one year ago was elected.

And love it or hate it, the fortunes of Republicans in the House and to a lesser extent the Senate in 2018 will be tied to how successful Trump is at enacting his agenda in Congress.

The formula for potential success is quite simple. Want to keep Congress in 2018? Enact the Trump agenda that won the day in 2016. The promises including cutting taxes, repealing and replacing Obamacare and building the southern border wall, among others.

If the Republican Congress won’t implement the Trump agenda, how do we justify a Republican majority in Congress?

It has been the failure to accomplish any major legislation in the first year that has driven down the approval of the Republican Congress. House Speaker Paul Ryan and Senate Majority Leader Mitch McConnell poll lower than the radical, violent Antifa movement, according to a poll by John McLaughlin. Only 15 percent support Ryan and McConnell. 21 percent support Antifa. Just think about that for a second.

The reason is because they’ve lost the support of Republican voters. And if those voters stay home in the 2018 Congressional midterms, it will be their fault for failing to produce a sufficient legislative record worth bragging about next November.

Many of Trump’s accomplishments, in fighting for better trade deals and rolling back major regulations, have been largely achieved without Congress acting. To be fair, Congress did enact of Congressional Review Act rollbacks of Obama midnight regulations, but as far as action against the Trans-Pacific Partnership, the Paris climate accords, the new and existing coal power plant regulations and renegotiating NAFTA, that has been all Trump.

The GOP Congress needs to produce legislation. That means big tax cuts for every American who pays taxes. Repeal and replace Obamacare. And build the wall. Do your jobs. Trump is racing circles around you. He’d have signed all of these bills by now. It is Congress that so far has not passed them. The irony is that in the primary, it was Trump’s conservative credentials that were challenged by the sanctimonious #NeverTrump cabal.

This author lives in Virginia, and I got exactly one knock on the door to make sure I was voting. On Facebook, the only Gillespie videos that targeted me concerned preserving Confederate war memorials. That’s it. Nothing about taxes, or stopping sanctuary cities, or even balancing the state budget. Just ads with Robert E. Lee statutes. Now, I happen to agree with preserving those statutes, but I also believe there were far more pressing issues facing Virginia in the election.

Congressional Republicans in 2018 cannot afford to make the same mistake. Voters rally to party standard bearers. Like it or not, Republicans who run away from Trump and the Trump agenda in 2018 will do so at their own peril. They will be suppressing their own voters.

Finally, a note on tax cuts. For goodness sake, cut everyone’s taxes. Don’t “pay” for tax cuts for some by raising taxes on others. Cut spending if you have to.

Right now, the current tax bill punishes high-income homeowners by targeting mortgage and property tax deductions. It punishes high-income individuals everywhere by eliminating the state and local tax deduction. It punishes the elderly by eliminating the medical expenses deduction. Conversely, it rewards renters by doubling the standard deduction, which is fine, but why isn’t everyone getting a tax cut?

How are Republicans in high tax states like New York, Illinois and California supposed to get reelected if Congress passes a bill that raised their constituents’ taxes? If Republicans cannot cut taxes right, what can it do?

Republicans have a once in a generation opportunity to government with the House, Senate and White House, and they’re blowing it. This opportunity is really rare. Only two Republican presidents since the Great Depression besides Trump have had that privilege, Dwight D. Eisenhower in 1953 and 1954 and George W. Bush from 2003 to 2006. 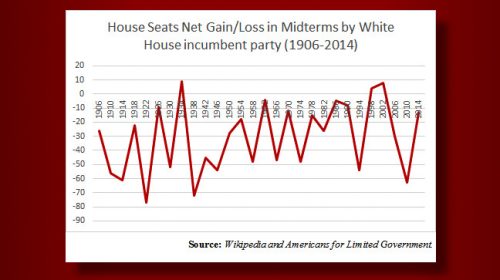 In the meantime, the high likelihood is Republicans will lose seats in the midterms. The White House incumbent party tends to lose House seats in midterm elections 89 percent of the time dating back a century, with losses averaging 35 seats. The exceptions were 1934, 1998 and 2002. That’s it.

Now, losing seats does not mean losing the House. If anything, Republicans should be on offense. On the Senate side, nine seats up for election were in states that Trump carried in 2016: Florida, Indiana, Missouri, Montana, West Virginia, Wisconsin, Michigan, Pennsylvania and Ohio.

2018, like other midterms, is not necessarily a referendum on the President. White House incumbent parties almost always lose seats but then rebound and go on to win reelection.

The formula to win those seats is simple. Run with Trump on the Trump agenda. Cut everyone’s taxes. Repeal and replace Obamacare. Build the wall. Or else it won’t be Trump who pays the price. The president is not on the ballot in 2018. The Republican Congress is.

Reprinted with permission from NetRightDaily.com.