“The solution is quite simple,” he said at a Nashville Republican Women’s luncheon at the Richland Country Club.

In addition to not being able to get a job, people here illegally should not be able to open a bank account, take out a loan or get a credit card, Valentine said. 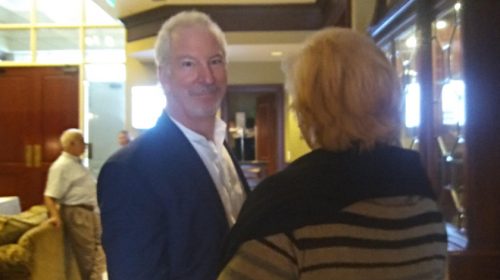 “If you demagnetize America, like I’ve been saying for 20 years, and make it impossible for somebody to be able to function in this society unless they’re legally here, you’ve solved that problem,” he said.

In recent years, a growing number of banks and financial institutions have allowed people to open accounts without requiring them to show they are in the U.S. legally.

Valentine also said the diversity visa lottery is “insane.” The program allows people to immigrate, often more quickly, to the U.S. to give underrepresented countries a boost. Valentine said he favors a merit-based system, which President Trump and his allies are promoting.

“If people want to come, then come to the table and tell us what you can do for us. This is not what we can do for you,” Valentine said. “What can you contribute to the United States of America?”

Not every immigrant needs to be a doctor, but they need to show they won’t become dependent on government, he said.

Raul Lopez, executive director of Latinos For Tennessee, a conservative political action group, also spoke at the luncheon. He agreed with Valentine that demagnetizing the U.S. is critical to stopping illegal immigration. Lopez said the nonprofit Conexión Américas undermines such efforts by helping illegal immigrants open bank accounts and take out loans. Conexión Américas, which has ties to La Raza, has “full access to our schools” through partnership programs and uses those avenues to connect with illegal immigrants who are parents, Lopez said.

“It’s frightening what’s going on under our noses,” he said. 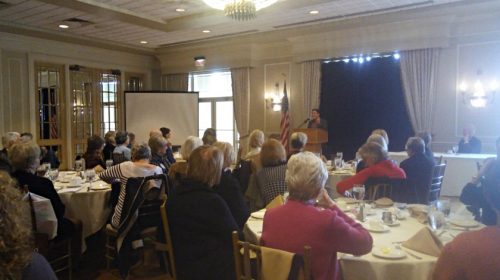 Lopez, who likes to describe himself as “Cuban by birth but American by the grace of God,” said immigration laws that are on the books have been “woefully ignored or poorly enforced.”

While many illegal immigrants work hard to provide for their families, go to church and do their best to stay out of trouble, there are others who are gang members, rapists and other violent criminals, Lopez said. Calling this out isn’t fear-mongering, as the left likes to portray, he said.

“Every sovereign country should know who’s entering and who’s leaving their country,” Lopez said. “We have every right to determine who gets to come to this country.”

Lopez said Latinos For Tennessee is united in promoting the rule of law when it comes to immigration, but that not everyone in the group holds the same position on how to address every issue that arises.

Lopez said he personally supports allowing people brought to the country illegally as children to stay in the U.S.

“I believe that children brought to this country breaking laws at no fault of their own should not be forced to leave the only country they’ve ever known,” he said, comparing it to being pro-life with respect to abortion and protecting the innocent. “But just because I feel this way doesn’t mean that everyone in Latinos For Tennessee feels this way.”

The issue is currently before lawmakers in Washington, D.C., who will be deciding what do with the Deferred Action for Childhood Arrivals (DACA) program. Started under former President Obama with an executive order, it has granted young people temporary permission to live and work in the U.S. if they were brought to the U.S. illegally as minors and meet certain criteria.

President Trump rescinded DACA but is giving Congress a chance to act. Some Republicans want to continue the program in exchange for funding for tougher border enforcement, but other conservatives say doing so would open the door to routinely granting benefits to people brought to the U.S. illegally as children and incentivize more illegal immigration. Activists are pushing for DACA recipients to be eligible for residency or citizenship.