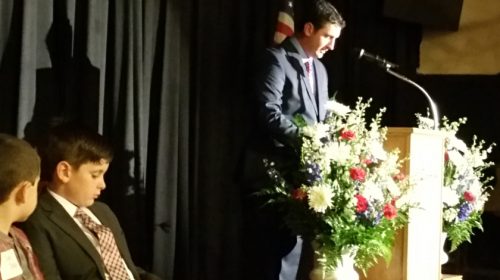 Doggett said of his decision to run that, like so many others before him, he was resolved “to stand up and protect the freedoms and liberties we now enjoy.”

While Barry Doss’s role as champion of the IMPROVE Act, breaking rules and renaming it the Tax Cut Act of 2017, calls for an ethics investigation, and, subsequent to the passage of the Act, his provocative road work and front-row support of Nashville Mayor Megan Barry’s $5.2 billion transit plan would have been an easy target for Doggett, he instead stayed remarkably focused on his own positions and qualifications.

A Giles County native, Doggett made his announcement at the Staar Theater in the county seat of downtown Pulaski after an eloquent and touching introduction by his six-year-old son, Coell. While there were about 100 people in attendance at the historic venue, one could nearly hear a pin drop as the audience listened intently to Doggett’s message.

After going to Giles County public schools and graduating from the University of Alabama with degrees in History and Political Science, Doggett became a high school teacher of history and government. He then worked for the Giles County Sheriff’s department for nearly five years, the latter part of which he started a small business to supplement his family’s income. The business expanded to the point that he pursued it full time and now has several full-time employees.

Doggett, sharing the cornerstones of his platform, started with the concept of less government. He said he shared the belief of our Forefathers that “Americans and Tennesseans are an intelligent, resourceful, and capable people who do not require interference from their governing bodies in order to succeed.” Doggett continued:

Without the constraints of excessive regulations and inappropriate taxation, especially when we have a surplus of taxpayer funds available, Tennesseans could excel and achieve their goals. 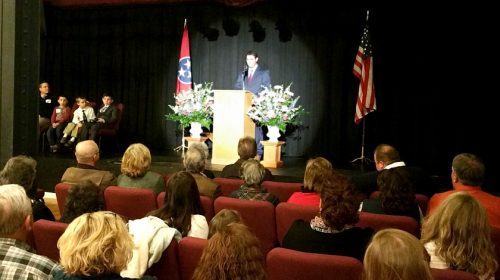 Doggett added the sought after and rarely heard philosophy of conservatives regarding the reduction in size and scope of government, “By reducing the size of our state government and bureaucratic agencies, power is placed back into the hands of the citizens. An atmosphere is created that is economically attractive to business and industry and it puts your over-taxed dollars back where they belong: In your pocketbook.”

Recognizing that, “Educators are special and have one of the greatest responsibilities known to man: To prepare our children for successful adulthood,” Doggett said when he worked in education, he tried to pattern himself after those who had taught him.

Again referring to government overreach with its “exhausting standards” and “bureaucratic regulations,” Doggett said it’s time to take the decisions on what and how to teach away from Nashville and put them back in the hands of local school districts, thereby removing the “handcuffs and let educators do what they do best – Teach.”

Doggett believes that in advocating and supporting families, it is important to fight to protect the sanctity of marriage according to God’s standards, not man’s and that the “key to stronger communities, stronger states, and a stronger nation is a stronger home.”

“A firm believer that life begins at conception and that every single life, no matter the gestational age,” Doggett says, “deserves the same amount of protection as a child already outside the womb receives.”

While nearly all candidates will claim that they are strong supporters of the Second Amendment, Doggett went further by recognizing not only that it is “paramount to the safety of the citizens of our state and country” that the second amendment right to bear arms be protected but, notably, that “in some cases, restore[d].”

With his experience as an educator, in law enforcement and a small business owner, and not as a career politician, Doggett concluded his experience “may not be in politics, but it is in public service. I am a man truly of the people and a man who will honestly represent those people.”