Roving Patriots PAC was founded with the purpose of its first project, Partnership for a Constitutional Tennessee, being to identify, vet and support conservative candidates in order to achieve a true conservative majority in the Tennessee House of Representatives.

After Doggett made the formal announcement of his intention to run, to the group of about 100 attending the event Baigert explained that he was there representing grassroots activists and contributors from across the state who want to “drain the swamp” in Nashville Tennessee, not just Washington, D.C. 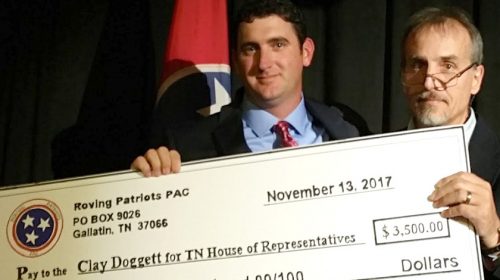 Baigert made specific mention of the passage of the tax- and fee-increasing IMPROVE Act, while the state had a $2 billion budgetary surplus as a bellwether issue. While Doggett never mentioned Doss, Baigert cited the representative’s key role in passing the IMPROVE Act followed by his company’s work on state roads and his attendance at Nashville Mayor Megan Barry’s introduction of a $5.2 billion transit plan.

As a first installment against the committed $7,800 maximum, Baigert presented Doggett with a check for $3,500. Doggett is the first candidate that the Roving Patriots PAC has provided financial support to.