Tennessee teachers are worn down by their workload and don’t think their school districts are doing enough to address the problem, results of an October survey by Professional Educators of Tennessee (ProEd) show.

The Nashville-based organization which represents teachers surveyed 536 educators from more than 81 districts. This was the second year for the annual comprehensive survey.

“I wasn’t surprised at all that teacher workload was the number one issue,” said Bethany Bowman, director of professional development for ProEd and a former teacher. 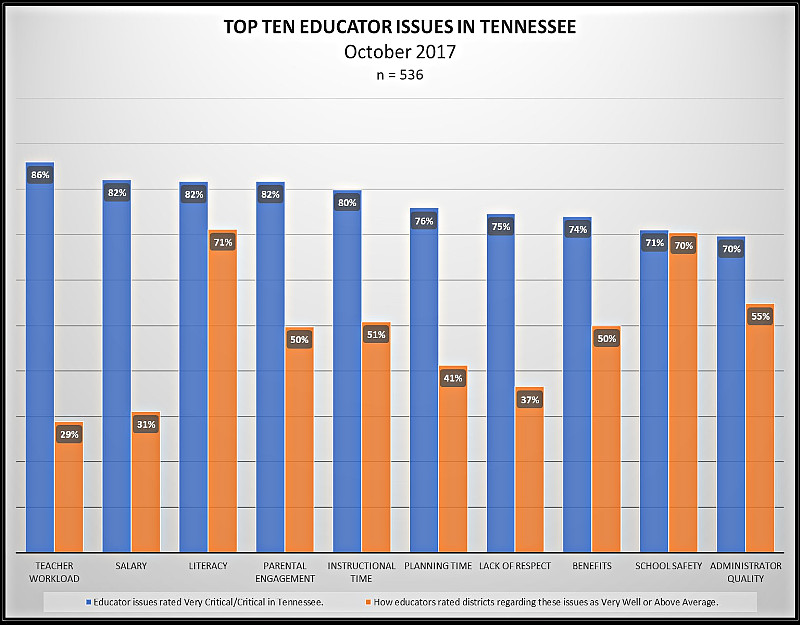 Bowman said bureaucratic state and district mandates make a teacher’s job exhausting. “There’s so much more to it than just instructing a class,” she said.

Bowman said that while testing did not make the list of top 10 critical issues, many teachers mentioned it in comments. Excessive testing is a topic increasingly raised by parents, politicians and others. Bowman said tests are mandated at both the state and district levels and teachers aren’t always aware of which ones are state-mandated versus district-mandated. Districts vary in the number of tests they mandate, but it’s often done to try to please state officials who want data, she said.

“Stakeholders at all levels should make it a priority to work together in order to reduce excessive educator workload at the same time providing salary increases that will actually go into the teachers’ paychecks and not just to the district coffers,” says a ProEd report summarizing the survey results. “Additionally, we feel it is also imperative that the state should ensure that classrooms are adequately funded, and work to reduce teacher out-of-pocket expenditures.”