NASHVILLE, Tennessee — As he travels the country speaking to young people, Alberto Gonzales asks them, how big can you dream?

Many are afraid of getting laughed at if they talk about their ambitions, or they are afraid of failure, Gonzales said Thursday at a Latinos For Tennessee fundraising reception. But he wants them to know that in America, dreams can still come true.

Gonzales is a former U.S. attorney general who served under former President George W. Bush and today is the dean of Belmont University’s Law School. A product of humble beginnings in Houston, Texas, Gonzales spoke of his own life as an example, telling of how his mom lived to see her son become a high-ranking official in the nation’s capital.

As another example, he joked that as a young boy he dreamed of the Houston baseball team that became the Astros one day winning the World Series. That dream came true Nov. 1 when the Houston Astros beat the Los Angeles Dodgers to win the title for the first time in their existence as a Major League Baseball franchise. 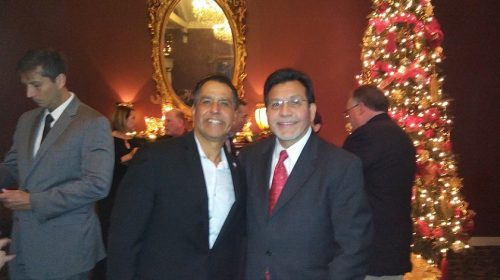 Thursday’s fundraiser at The Standard at the Smith House in downtown Nashville was held to raise financial support for a new internship program for Austin Peay State University students. Selected students will serve with both Congress and the Tennessee General Assembly. Preference will be given to students of Hispanic descent.

Latinos For Tennessee is partnering with the Congressional Hispanic Leadership Institute (CHLI) in Washington, D.C., to set up the internship program. The goal is to eventually expand the program to other universities in Tennessee.

Gonzales said he hopes the internship program will be influential in creating strong leaders. He compared it to planting a seed to grow a strong tree able to survive fierce winds. “A leader has to withstand the most violent storms of the culture wars,” Gonzales said.

Mary Ann Gomez Orta of CHLI and Hergit “Coco” Llenas of the American Federation for Children also spoke at the reception.

A number of conservative leaders and activists from Middle Tennessee attended Thursday’s reception, including U.S. Rep. Marsha Blackburn (R-TN-07), who is running for Senate, and Brent Moody, who is running for the Tennessee State House of Representatives. Both were among a handful of Republican political candidates who were sponsors of the event.