The White House held a Hanukkah Party on Thursday in recognition of the Jewish “festival of lights,” but only one of Tennessee’s two Jewish members of the House of Representatives was invited.

Rep. David Kustoff (R-TN-08) was invited and attended the event, but Rep. Stephen Cohen (D-TN-09), who was one of 58 Democrats who on Wednesday voted in favor of a failed resolution “to bring articles of impeachment against President Trump,” was not invited.

“This year’s Hanukkah party was all the more joyous for attendees because it came the day after Mr. Trump delighted many Jews, particularly those politically allied with him, by declaring Jerusalem the capital of Israel and recommitting himself to moving the American Embassy there,” The New York Times reported.

Kustoff praised Trump’s decision to move the American Embassy in Israel to Jerusalem.

“I applaud President Trump for fulfilling his promise to recognize Jerusalem as the unquestionable capital of Israel. After eight years of the Obama Administration’s failure to support our closest ally, this sends a powerful message to the world – the United States will stand shoulder to shoulder with Israel, our friend and the stronghold of democracy in the Middle East,” Kustoff said in a statement released on Wednesday.

Cohen, in contrast, has issued no statement from his office on the president’s decision to move the American Embassy to Jerusalem, though on November 15 his office issued a press release announcing that he had introduced five articles of impeachment against the President to the House of Representatives. 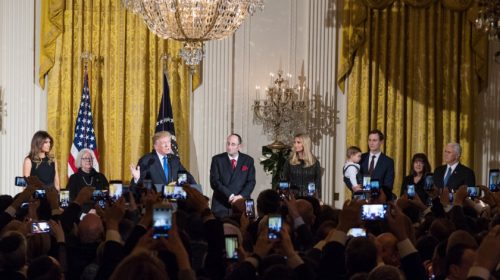 Cohen has been in the headlines recently after he led the charge to impeach the president prior to the failed House vote, as The Tennessee Star reported, and also launched an angry tirade against conservative activist Star Parker in the middle of a House Judiciary hearing.

Cohen was the only member of the Tennessee Congressional delegation to vote in favor of Wednesday’s impeachment resolution, which failed by a 364 to 58 vote.

The only other Democrat in the Tennessee Congressional delegation, Rep. Jim Cooper (D-Nashville), joined the majority and voted against the impeachment resolution.

Much of the media coverage of Thursday’s White House Hannukah Party focused on the partisan implications of those in attendance, noting that while two Jewish Republican members of Congress were invited, 20 Jewish Democrats were left off the guest list.

The New York Times  put heavy focus on the party identification of the guests, with the headline “Congressional Democrats Left Out of White House Hanukkah Party.” Newsweek framed the issue in even more stark terms:  “Trump to Jewish Democrats: You’re Not Invited to My Hanukkah Party.” CBS also told the story in terms of political parties: “Trump didn’t invite Democrats in Congress to the White House Hanukkah party, reports say.”

“I am not aware of the political affiliation of any of the guests, but I do know that this year was meant to be more personal than political,” Melania Trump spokesperson Stephanie Grissom said of the invitation list. 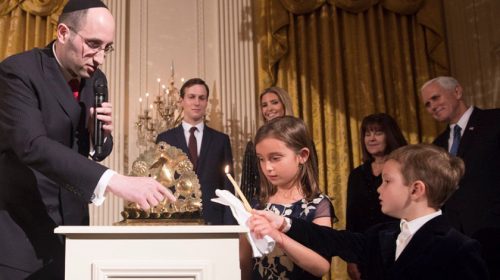 The attendance of a Supreme Court justice, Stephen G. Breyer, nominated in 1994 by President Bill Clinton, a Democrat, was the only hint of bipartisanship at the gathering, Mr. Diament said.

Democrats pounced on the guest list, attacking it as evidence of Trump politicizing a previously bipartisan gathering.

“It’s deeply unfortunate that the White House Hanukkah Party — a bipartisan event bringing together Jewish and non-Jewish leaders alike to celebrate the Festival of Lights since 2001 — has turned into a partisan affair under this administration,”  Democratic Rep. Nita Lowey (NY) said in a statement.

Despite the controversy, guests described the event as successful, and complimented Trump’s demeanor to The New York Times:

Mr. Honig, who took photographs with Mr. Pence and Mr. Adelson, said he was impressed with Mr. Trump’s “calm, confident” demeanor at the White House.

“He wasn’t bragging about Jerusalem,” Mr. Honig said. “He said it was the right thing to do. He showed America that we can lead and make a controversial decision.”

“Mr. Trump’s young grandchildren [children of Kushner and Ivanka Trump], who are Jewish, lit a menorah to mark the occasion,” The Times reported.