Congressional candidate Lee Thomas Miller completed an important rite-of-passage in Republican and conservative politics Wednesday when he traveled to Washington, D.C. to address the Americans for Tax Reform’s weekly meeting – the Wednesday Group – and signed on the Taxpayer Protection Pledge. 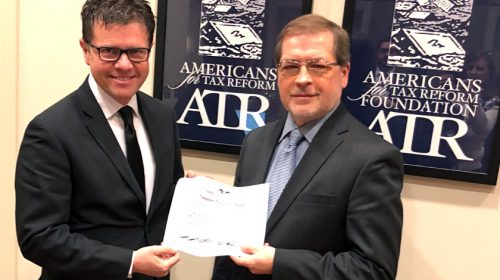 The non-binding agreement, also signed by fellow conservative and District 7 competitor Dr. Mark Green, states that the signer promises to “oppose any increase in the marginal income tax rates for individuals and/or businesses; and to oppose and net reduction or elimination of deductions and credits, unless matched dollar for dollar by further reducing tax rates.”

“Congress appears to be on the verge of passing the Tax Cuts and Jobs Acts and I encourage then the get the job done now, The reduction in the tax burden on working men and women along with cuts in the corporate tax rates will energize our economy and and create new jobs and opportunities for millions of Americans,” Miller said in a statement sent the The Tennessee Star. “So it was particularly appropriate to stand with Grover Norquist today and sign the Americans for Tax Reform Pledge.”

Passing the Tax Cuts and Jobs Acts in a final form will be a big step towards Making America Great Again, but our need to cut taxes and simplify the tax code is not done! I look forward to helping President Trump lead the way to more cuts, transparency, and simplicity in the tax code once the voters of the 7th District elect me to Congress next year.