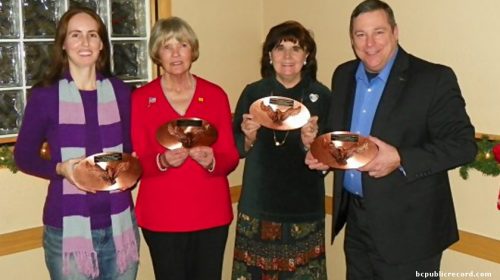 At Wednesday’s Blount County 3rd Annual Bill of Rights Banquet, county commissioner Scott Williams, who is running for the state Senate for Tennessee’s District 2, received the “Patriot Eagle Award” for his work to promote Constitutional integrity and good governance in their local communities:

The award is given to community leaders who selflessly work to promote Constitutional integrity and good governance in their communities. Joining Mr. Williams in receiving awards were Blount County Commissioners Tona Monroe, Jamie Daily, and Karen Miller.

Quoting Mr. Williams at the event “I find myself in the best of company this evening as all three of these commissioners work selflessly for the betterment of our community”

Mr. Williams received his award for the work he has done as the volunteer State Director for the Convention of the States project. Working in that capacity over a three-year period Mr. Williams was able to guide Tennessee in becoming the 5th state to apply for an amending Convention that would offer constitutional amendments that would limit the power and jurisdiction of the federal government, put fiscal restraints on the federal government and limits the terms of its officials. To accomplish this both the Tennessee house and senate had to pass a vote agreeing to the application. Currently 12 states have passed this resolution 24 more are needed in the process.

As a virtual unknown, Scott Williams earned nearly 40 percent of the vote when he went up against state Sen. Doug Overbey (R-Maryville) in the 2016 race for the Republican nomination for the District 2 seat.

When Overbey was tapped to join the Trump Administration, Williams and State Representative Art Swann (R-Maryville) both vied for the interim appointment. Blount County officials ultimately appointed Swann, and Williams announced his candidacy for the seat soonafter.