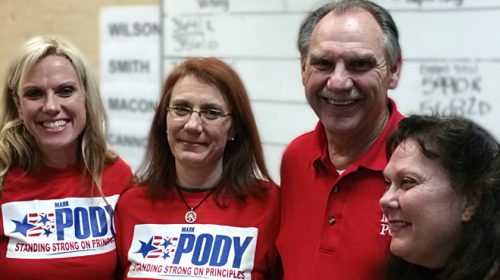 Barring a recall challenge from Carfi, Pody will take over the State Senate seat left by former State Senator Mae Beavers (R-Mt. Juliet), who resigned in August to devote full time to her campaign for governor, and be seated in the Tennessee State Senate when the Tennessee General Assembly reconvenes in January.

The surprisingly narrow margin of victory for Pody, 51 percent to 49 percent, was dramatically lower than the last time the State Senate seat was contested in 2010, when Beavers easily won by a 24 percent margin. When Beavers ran for re-election in 2014, the Democrats did not field a candidate.

The slim margin of victory for Pody was even more surprising, given that the Democratic candidate spent very little money on her campaign, focusing instead on get-out-the-vote efforts, sources tell The Star.

A county-by-county analysis of the vote total, as seen here on the tally board at Pody election headquarters on Tuesday night, shows that the race was close in all but two of the district’s six counties.

“This narrow victory by Senator-elect Mark Pody should be a wake up call for the State Republican Party and candidates across the state heading into 2018,” conservative media analyst Steve Gill tells The Star.

“Simply having an ‘R’ next to your name isn’t enough to win, even in dark red districts. The state and local parties need to stop bickering and focus on grassroots organization and turnout; and candidates shouldn’t count on any operational or organizational help other than what they establish and deploy for themselves,” Gill adds.

State Rep. Pody told The Star late Tuesday he was pleased with the victory.

“We are very honored to have this victory tonight,” Pody texted The Star at 10 p.m. Tuesday.

“The voters had a clear choice. Now it’s time to work on the conservative values that make Tennessee great,” Pody added.

Pody, who will serve out the remainder of former State Sen. Beavers’ term and is up for re-election to a full term in November 2018, has his work cut out for him.

Sources tell The Star that the Democrat base was very energized, and turned out at higher rates than the Republican base, a consequence perhaps of the momentum gathered by Democrats with last week’s surprising upset of Republican Roy Moore by Democrat Doug Jones in the Alabama U.S. Senate special election.

The need to develop a get-out-the-vote organization in all state contests in 2018 was emphasized by Steve Gill in his post-election analysis.

“Both parties have become too dependent on traditional media and digital ads and let infrastructure and local outreach efforts lag,” Gill tells The Star.

“Those who get aggressive and activate their voters will win, while campaigns who fail to do that will find themselves in the losers column. Mark Pody is fortunate to be celebrating a razor thin win rather than a shocking and inexplicable loss,” Gill concludes.

The Wilson County Commission will now select someone to serve out the balance of Pody’s term representing the 46th House District.