Rep. Diane Black (R-TN-06) has opened up a ten point lead over Randy Boyd, her closest rival for the Republican gubernatorial nomination in Tennessee, according to a new poll released by The Tennessee Star.

Black received the support of 21 percent of likely Tennessee Republican primary voters to lead the field of five contenders, followed by Boyd in second place with 11 percent. Rounding out the bottom tier of candidates are Speaker of the Tennessee House Beth Harwell (R-Nashville) with 6 percent, Bill Lee with 4 percent, and former State Senator Mae Beavers (R-Mt. Juliet) with 3 percent.

The good news for Black’s four rivals for the GOP nomination is that 52 percent of likely voters in the August 2018 Tennessee Republican gubernatorial primary are still undecided.

The poll of 1,028 Tennessee Republican likely primary voters was conducted between December 12 and December 18 for The Tennessee Star by Triton Research using IVR technology (automated phone response), and has a 3.1 percent margin of error.

Boyd led over Black in East Tennessee by a 20 percent to 12 percent margin, with 52 percent undecided.

Almost all the movement in the race since the June 2017 Tennessee Star Poll, which showed that none of the likely contenders for the nomination–seven at the time– had more than ten percent support and 61 percent of poll respondents were undecided, has gone towards Black.

In that earlier poll, Black and Boyd were in a statistical tie for the lead, with Black at 9 percent and Boyd at 8 percent. State Senator Mark Green (R-Clarksville), who has subsequently announced his candidacy for the 7th Congressional District seat instead of the governor’s race, was in third with 6 percent. Harwell and Lee were tied for fourth with 4 percent each, Beavers was in sixth with 3 percent, and State Senator Mark Norris (R-Collierville), now a federal judge nominee, was in seventh with 2 percent.

In the six months since the June 2017 Tennessee Star Poll, all 9 percent of the undecided voters have moved to support Black. Black and Boyd have split the 8 percent of the vote from the two candidates polled in June who are not now in the race.

Black has more than doubled her support with a 12 percent increase from 9 percent to 21 percent.

Only Black has seen an increase in support that is beyond the poll’s 3 percent margin of error.

The latest Tennessee Star Poll results were similar to results released on Wednesday by a group known as Tennesseans for Student Success (TSS) with one notable exception. Instead of showing Diane Black with a 10 point lead over Randy Boyd, 21 percent to 11 percent,  the TSS Poll showed Black with a 3 point lead over Boyd, 16 percent to 13 percent.

The two polls differed methodologically in at least one major way.

Typically, most professional polling firms try to conduct their polls within a two to six day period so they capture an accurate snapshot of public opinion at a specific period in time that is not influenced by intervening news events of significance.

Since The Tennessee Star Poll is more recent than the TSS Poll, it may also have captured recent movement towards Black.

“It is still very early in this race and most voters haven’t picked a candidate yet, or may still change their minds over the next seven months, so the current ‘horse race’ standings don’t really concern me,” gubernatorial candidate Mae Beavers told The Star.

“What should concern all the other candidates is the fact that my views and the issues that I have been talking about to voters, including blocking illegals from receiving taxpayer supported tuition, keeping men out of locker rooms at our schools, repealing the unnecessary gas tax increase, and protecting and preserving our monuments and recognition of Tennessee history, all resonate strongly,” Beavers continued, adding:

As voters hear my views, they will find that I am the only candidate who shares their opinions, and I expect their votes to quickly change the poll numbers in my direction. Voters will eventually learn that I am the only one willing to speak up and take their side on those issues.

The Star did not receive comments on the poll results from any of the four other Republican gubernatorial candidates.

UP NEXT: Senate GOP Primary Poll Results (to be published tomorrow, Friday, December 22)

You can read page 2 of the poll results here: 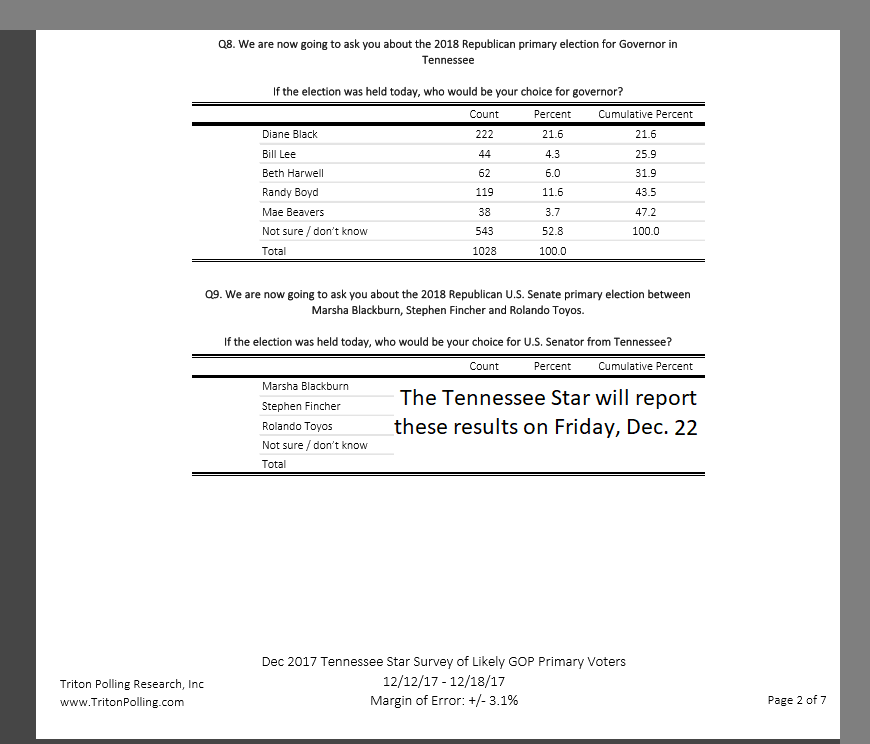