“How do you increase your net worth by 69 million dollars while you’re working full-time as a Senator?” That’s the question Rolling Stone reporter Matt Taibbi asked about Senator Bob Corker (R-TN) on Friday.

Neither Taibbi nor Rolling Stone are fans of Corker (or of President Trump, Republicans, or conservatism in general). And Rolling Stone has had problems of its own, recently, as has Taibbi.

Nonetheless, Taibbi puts a fine point on what many political watchers across the Volunteer State have been asking for years. 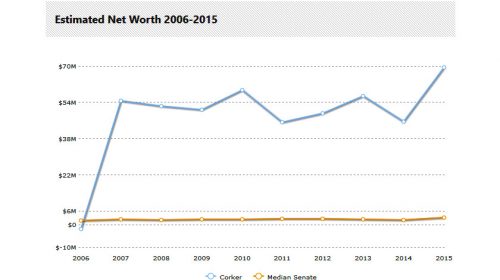 Federal campaign contributions and lobbying data tracker Open Secrets has perhaps the most jaw-dropping illustration of Corker’s rise to wealth.

As Rolling Stone’s Taibbi writes, “Corker didn’t just enter the Senate without any money. He entered it carrying, according to his own disclosure forms, a mountain range of huge loans.”

Setting the stage for his ‘promotion’ from Chattanooga Mayor to U.S. Senator, Taibbi writes of Tennessee’s junior senator:

Corker took office in January, 2007, during the last gasp of the Bush/Rove political juggernaut. The Iraq war had gone south and the Republicans had just been routed in midterms. The financial crisis was just around the corner. And nobody paid attention to the smooth-talking freshman Senator from Tennessee, who turned out to have some financial issues. . .

It wasn’t until Corker took office and filled out disclosure forms that his finances became public – sort of. Few in the media seem ever to have read the “liabilities” section of Corker’s first disclosure, where the former mayor and construction magnate listed a series of massive outstanding loans. At the low end, Corker appeared to owe a hair-raising $24.2 million. At the high end, $120.5 million.

He took office in debt to some of the nation’s biggest lenders – including somewhere between $12 million and $60 million in debt to GE Capital alone.

Corker had been a construction magnate in Tennessee before taking office, a sort of mini-Trump. Before he ran for office, he sold off his business to a local developer named Henry Luken.

Corker insists that the debts associated with the business were included in the transaction, however his financial disclosures seem to conflict with that assertion.

Sixteen paragraphs in to the article, Taibbi reveals this startling information about the first steps Corker took to accumulate his millions:

Corker tested the limits of the profiteering possibilities in the legislative branch, essentially becoming a full-time day-trader who did a little Senator-ing in his spare time.

Followed a few paragraphs later by:

By 2014, when Corker sat on the Senate Banking Committee, a position that gave him regular access to prime information about the future direction of the markets, the Tennessee Senator still had his foot on the gas. He made 930 stock trades that year.

The brazen trades – and their frequency – went generally unnoticed, but for the occasional ethics watchdogs who would cry foul from time to time. Anne Weismann is one such individual that Taibbi found, who, as the director of the Campaign for Accountability, filed a complaint in 2015.

“Senator Corker’s trades followed a consistent pattern,” Weissman said in the Campaign for Accountability’s statement about their filing. “He bought low and sold high. It beggars belief to suggest these trades – netting the senator and his family millions – were mere coincidences.”

Many of Sen. Corker’s profitable trades were made in advance of his broker, UBS, issuing reports impacting CBL’s trading price.

Sen. Corker recently amended his filings to reveal a 2009 purchase of between $1 and $5 million of CBL stock, sold just five months later in 2010 at a 42% profit. Similarly, Sen. Corker made purchases worth between $3 and $15 million in 2010 and, just after his last trade, UBS said it was upgrading its outlook. The stock went up 18%. Shortly thereafter, Sen. Corker began selling; a week later, UBS downgraded the stock and the share price soon declined about 10%.

Corker spokesperson Micah Johnson is quoted by the Rolling Stone’s Taibbi about the complaint(s) saying: “they were ‘yet another baseless accusation by this political special interest group. These claims are categorically false and nothing more than a smear campaign. When amending the senator’s financial disclosure report, our office worked directly with the Senate Ethics Committee to ensure items were reported accurately and in line with Senate guidelines.”

The Rolling Stone article is not the only press report involving questions about Corker’s investments.

“A real-estate firm that has been a favored investment of Tennessee Republican Sen. Bob Corker is under investigation by federal law-enforcement officials for alleged accounting fraud, according to people familiar with the matter,” The Wall Street Journal reported in March 2016:

The Federal Bureau of Investigation and the Securities and Exchange Commission are focusing their examination of CBL & Associates Properties Inc. on whether officials at the Chattanooga, Tenn., company falsified information on financial statements to banks when applying for financing arrangements, the people said. Law-enforcement officials have talked to former CBL employees who allege the company inflated its rental income and its properties’ occupancy rates when reporting those figures to banks, the people said.

The FBI and SEC officials have also separately asked questions about the relationship between the company and Mr. Corker, who is close with senior executives at the firm and has made millions of dollars in profits trading the company’s stock in recent years. Authorities don’t believe that Mr. Corker was involved in the company’s potential accounting issues, but they are interested in learning more about the senator’s trading in CBL’s stock, the people said.

They have found no evidence to suggest that Mr. Corker has committed wrongdoing.

In another matter, The Tennessee Star reported earlier this year that concerns about ongoing investigations looking into an extremely profitable real estate transaction in a Mobile, Alabama retail center may have contributed to Corker’s decision to not seek re-election. The Star’s own Editor-in-Chief Michael Patrick Leahy wrote a series of investigative reports for Breitbart News that detailed the senator’s Alabama sweetheart deal.

46 Thoughts to “Question Posed: How Did Bob Corker Go from ‘Dead Broke’ to $69 Million Net Worth During 11 Years in U.S. Senate?”