Don Sundquist, the establishment Republican who failed in his efforts to force a state income tax on Tennesseans when he served as the state’s governor between 1995 and 2003, has a new political purpose–he wants to help his “friend and neighbor” Randy Boyd become the next governor of the state.

The Tennessee Star obtained a copy of the Sundquist family Christmas Letter for 2017 in which the former governor and his wife issued a call for help and support in the gubernatorial campaign of Knoxville-area businessman, Randy Boyd.

At the end of the second paragraph of the five-paragraph missive, the Sundquists boast about the many high-level political events they have been a part of through the year.

After a quick recap of what was undoubtedly a beautiful week spent in a villa in Tuscany, Italy, the couple talk about their time in Washington, D.C. for the 50th anniversary of the Fund for American Studies that the letter says former Governor Sundquist “has been a part of since its inception.” A notable high point of the event was a featured speech by the newest member of the Supreme Court, Justice Neil Gorsuch.

Next, the letter sets up for a pivot and an ‘ask,’ with: “earlier in the year, the Tennessee Republican Party had Vice President Pence as the speaker, so you can see politics is still a big part of our lives.” (emphasis added)

“Don is also helping Randy Boyd in his race for the Governor of Tennessee,” the letter reads, asking:

We would appreciate any help you can give Randy, our friend and neighbor.

From there, the letter moves on from politics and returns to the matters that are common to all families: new jobs, sad deaths, future plans, and well wishes.

One Capitol Hill insider, informed about Boyd relying upon Don Sundquist’s political support, laughed: “Is he trotting out Lane Kiffin, next? Or maybe former Speaker Jimmy Naifeh, who paired with Sundquist to push the income tax in the House? Can Boyd really be this politically tone deaf or is it just pure arrogance?”

Conservative Republican gubernatorial candiate Mae Beavers pointed out: “I helped lead the fight against Governor Sundquist’s income tax and cannot imagine anyone who is an actual fiscal conservative relying upon him for guidance or support. Since Governor Sundquist left office we not only have not imposed a state income tax on Tennesseans but have eliminated the Estate Tax, eliminated the Hall Income tax, cut the sales tax on food and still had about $2 billion in surplus and recurring revenue last year. ”

“To top it off, Tennesseans voted for a Constitutional Amendment to permanently ban a state income tax so we could finally end the threat. Sundquist claimed Tennessee would be bankrupt if we didn’t pass an income tax; clearly he was wrong. So why does Randy Boyd want his insight, support and expertise?” Beavers asked.

Conservative Republican strategist Steve Gill, who played a critical role in defeating the state income tax efforts while on the air as a talk radio host in Nashville, admitted being puzzled by the Boyd campaign’s embrace of Don Sundquist.

“Sundquist became a pariah in the wake of the income tax battle not just because it was such bad policy but because of the thuggish way he and the Democrats in the House tried to force it down the throats of Tennesseans who adamantly opposed it,” Gill told The Star.

“The policy was horrible, the process they employed was even worse. The fight spawned the ‘horn honkers’ who preceded the Tea Party and was a key factor in turning the legislature from solid Democratic Party control to Republican supermajorities in both houses in just 15 years. It essentially exploded the careers of many actual conservatives, including Congresswomen Marsha Blackburn and Diane Black and State Senator Mae Beavers, all of whom were the most visible opponents the Republican Governor’s plan. Sundquist is not considered any sort of ‘revered elder statesman’ of the party by anybody involved at that time,” Gill concluded.

The latest Tennessee Star Poll conducted in early December shows Randy Boyd is in a distant second place behind Rep. Diane Black (R-TN-06) in the race for the 2018 GOP gubernatorial nomination, and it is hard to see how the endorsement of the former governor reviled by the conservative base in the party will do anything but hurt Boyd’s chances:

Rep. Diane Black (R-TN-06) has opened up a ten point lead over Randy Boyd, her closest rival for the Republican gubernatorial nomination in Tennessee, according to a new poll released by The Tennessee Star.

Black received the support of 21 percent of likely Tennessee Republican primary voters to lead the field of five contenders, followed by Boyd in second place with 11 percent. Rounding out the bottom tier of candidates are Speaker of the Tennessee House Beth Harwell (R-Nashville) with 6 percent, Bill Lee with 4 percent, and former State Senator Mae Beavers (R-Mt. Juliet) with 3 percent.

Boyd already seems to be out-of-step with the Republican party base, at least as revealed in the Tennessee Star Poll that “provided information on Tennessee Republican voter attitudes on six key policy questions that are expected to drive the debate in the Republican gubernatorial primary over the next eight and a half months.”

According to the poll, likely Republican primary voters in 2018:

However, in a recent radio interview with WTN’s Ralph Bristol, Boyd seemed to be out-of-step with Republican primary voters, as reported by The Star:

At first, Boyd makes it sound as if he is opposed to giving in-state tuition to illegal aliens when he says, “I don’t believe that the state should be providing additional benefits for people that are illegal in our state.”

But Boyd makes a quick pivot relying on the same arguments used by legislators who voted in favor of the State Sen. Gardenhire/State Rep. White in-state tuition bill.

Former State Sen. Jim Tracy (R-Shelbyville) said his focus was wanting to help UT Martin fill their open seats because “we need more students in college…we are not at full capacity now…I’m just trying to reach more students.” Boyd used a partially empty hotel example to illustrate why the state shouldn’t use its tuition policies to “charge a penalty of triple” the amount of in-state tuition:

I think that’s true and I think this my be a longer conversation for another interview, but I think there is also a concern that I have about us being able to attract more talent around the country and around the world into our universities. Many of our universities are not at capacity. If you’ve got a hotel, and you have 30 percent empty rooms, you don’t charge 300 percent more to those last few rooms. The variable cost is fairly small in filling those up. We’ve got a lot of those universities that would actually make a significant amount of money charging just the normal, full tuition – rather than charging a penalty of triple. So I think we need to look at our overall tuition policy. But that’s a more broader conversation that has not really anything to do with- (emphasis added)

The 2015-2016 Tennessee Higher Education Fact Book shows that both the UT and TB Board of Regents universities and the community colleges total enrollments from 2010 – 2015, are trending down. 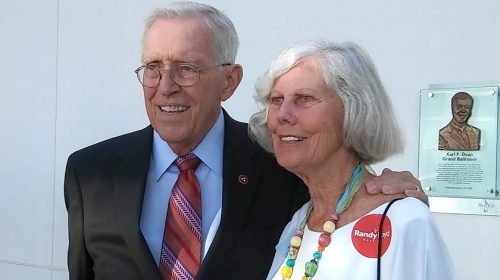 Early on, Sundquist made his preference in the Republicans’ five-way gubernatorial nomination contest known. Here he is with his wife, Martha, at the November 30 fundraiser held for Boyd in Nashville that featured failed presidential candidate Jeb Bush.

The unpopular former governor’s endorsement of Boyd may well be “the Sundquiss of Death” for the Knoxville businessman’s gubernatorial aspirations.