Shane Reeves’ initial mail pieces and television spots in the special election for the 14th District State Senate seat vacated by former State Senator Jim Tracy (R-Shelbyville) highlight his support for Presidential Donald Trump and his anti-Establishment agenda.  However, an examination of Reeves’ record finds scant evidence of support for President Trump either during the Tennessee Presidential primary election or during last year’s general election.

While Reeves has a record of supporting moderate candidates in Tennessee and nationally with campaign contributions, including Tennessee Senators Bob Corker and Lamar Alexander, and 2012 Presidential nominee Mitt Romney, there is no record at the Federal Election Commission of Reeves making any contribution to President Donald Trump in 2016.

Reeves has also made a contribution to, and endorsed, self described “moderate” Republican candidate for Governor Randy Boyd.

As reported by The Tennessee Star in November 2016, then ECD Commissioner Randy Boyd directed a million dollar “fast track” grant to Reeves’ company.  Then, once Boyd left ECD to pursue his campaign for Governor, Reeves donated $5000 to Boyd through his PAC — and endorsed him during a campaign stop in Murfreesboro. 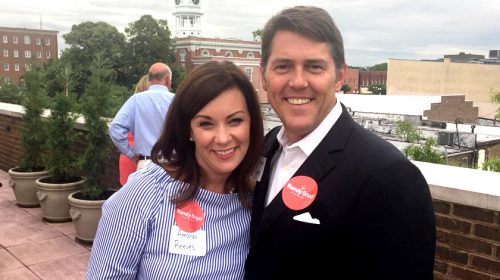 The Boyd-Reeves connection is particularly relevant to Reeves’ campaign claim of support for President Trump and his agenda because of Boyd’s solid record of opposition to Trump. During the 2016 campaign Boyd “disavowed” Trump.

Randy Boyd, like Shane Reeves, also refused to donate money to Donald Trump’s campaign, though Boyd went further and said supporting Trump would be “anathema” to him.  Boyd and Reeves both stopped short of being as anti-Trump as Governor Bill Haslam, who indicated that he would not even vote for Trump as the Republican nominee. However, Boyd recently hosted a fundraiser with Jeb Bush who, along with his family members, continues to revel in their anti-Trump status.

Reeves’ close ties to Boyd may also undercut his “conservative” tag, which is often repeated but not substantiated in any of his campaign ads. Boyd made a $250,000 donation to Conexion Americas in 2016, a group associated with La Raza, whose co-founder helped organize the anti-Trump #INDIVISIBLE campaign. Nevertheless, Reeves claims to support “real immigration reform,” though he fails to explain what he means by that.

Reeves turned down an opportunity to interview with The Tennessee Star in early November and share his views on the issues likely to emerge during the campaign.

Political observers have been struck by how his recent mail piece appears to be directed at Democrat voters due to the intentionally “blue” color scheme. “Because the Democrats don’t have a contested election for this primary, with only one candidate in their field, Reeves strategy appears to be intended to attract crossover Democrat votes into the Republican primary,” one noted campaign consultant not involved with either the Reeves or Joe Carr campaign pointed out. “With a low turnout special election in January, a few hundred crossover Democrat votes could swing the primary election to the more moderate Reeves and block the more staunchly conservative Carr from winning the seat.”

The winner will face the Democratic nominee in a general election to be held in March.