After serving six years as the State Representative for House District 45, Courtney Rogers announced that she will not seek re-election to a fourth term in 2018.

After making a number of personal contacts, Rogers made her decision public through a Facebook post on Monday morning, the day before the start of the new legislative session at noon Tuesday. Rogers’ announcement is the latest of nearly two dozen in the State House that will not be running for an additional term.

Rogers has made a life of public service, retiring as a Lt. Colonel from the Air Force after 28 years of military service and continuing to serve in the Tennessee Air National Guard. Entering the political arena, Rogers said in her post, “was to serve one last tour of duty – only this time as a citizen legislator.”

With funds in her campaign account and no declared Republican primary opponent, the announcement comes as a surprise and disappointment to many conservatives who have come to count on Rogers to reliably and consistently uphold constitutional principles as well as conservative and traditional values as she promised when elected in 2012.

Regular observers of House floor sessions would see Rogers arrive prepared, attentively listening and engaged in the entire process with a near palpable seriousness, even from the distance of the gallery.

As for the reason for stepping down, Rogers says “It is time for me to seek new challenges and new ways to serve that will also allow me to better focus on my family.”

Rogers’ father, as a U.S. Marine Aviator flew Marine I for three presidents and served three tours in Viet Nam, where he died when his helicopter went down, inspired her to join the military.

Earning a Bachelor of Science degree in International Relations with a Certificate in Soviet Studies, Rogers later served with the Strategic Air Command during the Cold War, during Operation Just Cause in Panama and then in Operation Desert Storm. After her retirement from military service, Rogers became an affiliate host for “One Nation Under God Radio” and developed a seminar series, “Foundations of Liberty.”

Rogers’ military experiences included studying and observing totalitarian government and seeing firsthand the dangers of illiteracy and ignorance cultivated and exploited by dictators and made education one of her pressing priorities “to have a citizenry that can both maintain good government and restrain it,” and “help bring prosperity to our communities and families.” 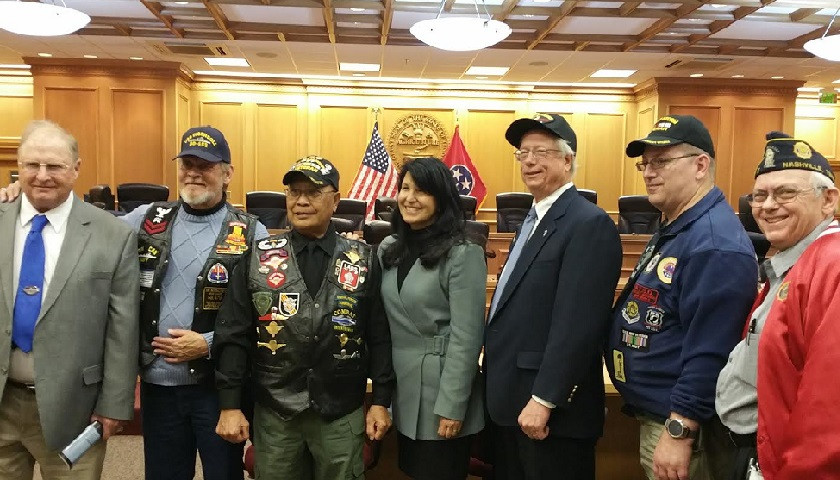 The research she did on the history of our nation for the radio programs, Rogers said gave her “a better understanding of the source and the spirit of our liberty. Our nation is built on a strong foundation created by our God, our Creator.” “It is this belief and understanding,” Rogers said when running for office, “will not only sustain me but will guide me as I serve as your representative.”  Addressing her priorities, Rogers’ campaign motto was “Faith Family Freedom.”

In the House, Rogers was a member of the Civil Justice Committee and a member and Vice Chair of the Transportation Committee. Rogers was a strong supporter of additional funding for roads, but was outspoken in the most recent legislative session against the gas tax increasing IMPROVE Act and, as a member of the Tennessee Legislative Veterans Caucus, the use of veterans as a political ploy in passing a tax increase on all Tennesseans.

Reacting to Rogers’ announcement, words such as “inspiration,” “jewel that shines in a corrupt world,” “excellence,” “highest esteem,” “integrity,” “honor,” “dignity” and, of course, “service,” could be found among the Facebook comments.

The full text of State Rep. Courtney Rogers announcement can be read here:

To friends, citizens of the 45th District. After much discussion with the core of ‘Team Rogers’ (my family), and after extensive thought and prayer, today I am announcing that I will not be seeking reelection to the Tennessee General Assembly in 2018. When I entered the political arena, it was to serve one last tour of duty – only this time as a citizen legislator. Now, after having served my country through a 28-year military career, and an additional 3 terms (6 years) as a state legislator, it is time for me to seek new challenges and new ways to serve that will also allow me to better focus on family.

The opportunity to serve as your State Representative has been amazing – and a true honor. The most valuable lesson I have learned as a representative is that there are many great and good people in the world. District 45 and Sumner County are truly blessed in that there are so many doing positive things in our community – as private citizens or as part of other organizations. It has been both exciting and humbling to meet so many of them and that experience has really opened my eyes and changed my life.

When I was elected in 2012 it was my promise to serve in accordance to constitutional principles, and conservative, traditional values. I have done that and will continue to do that through the remainder of the 110th General Assembly. It was never my intent to become a career politician. I do not believe that such a goal is healthy for any individual, nor is it good for the citizens they serve – regardless of the level of office they hold.

In the end, I cannot say thank you enough to the people that have supported, encouraged, educated, and mentored me and prayed for me along the way. I have spoken to Speaker Harwell and I thank her for her understanding and graciousness in this decision. Though I will not seek reelection at this time, I will continue in the tradition of serving my community for many years to come.