NASHVILLE, Tennessee – At a “Let’s Talk Transit” Nashville Chamber of Commerce event sponsored by Piedmont Natural Gas on Wednesday , keynote speaker Mayor Megan Barry delivered a number of campaign slogans and one liners, but her address was short on the substantive details about her proposed $9 billion mass transit plan. 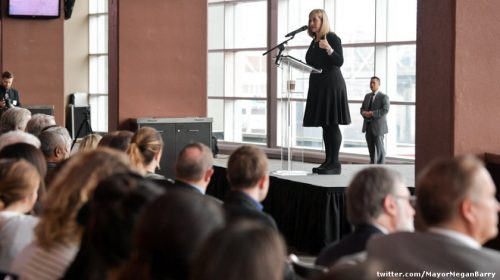 Mayor Barry was introduced by Jennifer Carlat, Nashville Area Chamber of Commerce Vice President of Policy, at the nicely appointed Nissan Stadium West Club where about 500 pre-registered guests were in attendance.

Carlat said that most people attending said their “commute was easier than they thought,” and added that the Chamber is looking to engage members and their employees and get them the information they need before the vote on May 1.

After recognizing several Metro Council members that were in attendance after a late public hearing on transit held the previous night that went from 6 to 9:50 p.m., Mayor Barry gave a “shout out” to the Titans for hosting the event. She joked that Kansas City barbecue would be coming her way, as a result of the Titans wild card win last weekend, and that she was looking forward to  receiving some “Boston clam chowder,”  after the Titans’ game against the New England Patriots this weekend.

After asking for a show of hands as to who drove versus taking a bus, biking or walking, and nearly a unanimous show of hands, Mayor Barry delivered the first slogan about the commute: “Today is the best day,” warning tomorrow will get worse as will every day after.

With “one million people coming to the region in the next 25 years,” Mayor Barry’s response to those who say stop growing is, “We don’t want to.” She added, standing in front of a wall of windows facing the opposing riverfront, “The skyline behind us will continue to change. There will be more building and more cranes.” With that, the mayor said that “we need to manage. Think not just about today, but 5, 10, 20 years and invest.”

“The cost of doing nothing just gets greater.” She said “don’t want to look back and say we failed to act.”

The few plan details Mayor Barry cited included 28 miles of light rail, 25 miles of rapid bus service, dramatically improved bus service and a tunnel under 5th Avenue that connects all for a “one seat ride” in a fiscally responsible way.

The mayor mentioned that later today her previously announced Transit and Affordability Task Force would be providing recommendations that will protect and enhance business on the transit corridors and affordability in housing.

After a majority raised their hands as residents of Davidson County, Mayor Barry urged attendees to talk with their respective Metro Council members to get the referendum on the ballot. She added that Councilman Walter Searcy said it well in closing the previous night’s meeting that “democracy” needs to work such that the transit plan “gets on the ballot so people can vote so they can make the right decision.”

The mayor said everyone in the room is a leader, and learning as a candidate to “never walk away from an audience without asking for the vote,” encouraged, “Use your voices and vote for this. Be for transit and be willing to pay for it.”

Barry admitted that there is no “Plan B” if this doesn’t pass, “This is the plan,” after “years of input with key stakeholders.”

Then, in Nancy Pelosi-like fashion, Mayor Barry said they don’t know where every stop and station will be “until we pass it first.”

“Already hearing from detractors,” the mayor then sought to dispel some “myths.”

Relative to ridership trends, Mayor Barry cited some national statistics on the increased number of people using transit over the past 20 years, although she did admit that (Nashville) MTA (Metropolitan Transit Authority) ridership is down, saying, “That’s true, but not surprising, because they’re stuck in the same traffic.” She continued, “Where investments and service improvements have been made, such as Nolensville and Charlotte, there has been an increase,” because users “want speed and reliability like Music City Star.”

The mayor did not address whether the recent elimination of transfer fees, subsidized through a general fund transfer of $2.75 million, has incentivized any increases in ridership. 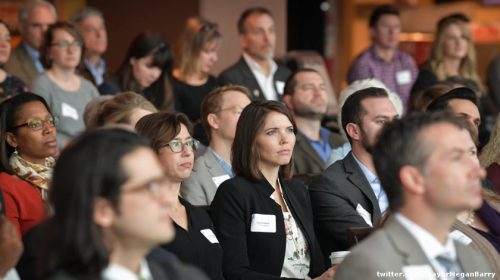 According to Barry, cities competing for business invest in transit, including Charlotte, one of Nashville’s biggest competitors that invested 10 years ago and saw $1.8 billion in development within five years of opening the line which is now being extended 9.3 miles.

Raleigh, Indianapolis, Austin, Atlanta and Los Angeles, Seattle, Minneapolis, Salt Lake City and Denver – all competitors for business, tourists and workers – are “doubling down,” Barry said. “So we need this.”

Barry estimated that the transit plan will create 3,850 jobs per year for the 14 years of construction plus $3 billion in economic impact, although there was no comparison as to what job creation or economic impact would be created without the $9 billion transit plan.

“Transit is not on the decline or way out,” and, said Barry, it’s “What we need as a city to be the city we were meant to be.”

To other myths relating to “population density” and “people won’t get out of their cars,” Barry argues, “Trying to plan for low density and creating sprawl is how we got where we are now.” The mayor added that the demographics of first-time and retiree homebuyers are changing and, not wanting to drive, they want transit. Mayor Barry suggests creating “dense building in the city with more walkable neighborhoods,” which have already been identified and “can’t wait for density to do transit.”

“Autonomous vehicles will make traffic disappear,” is another myth Barry mentioned. The problem, she says, is that there are still cars which take up much more space per person than buses or trains, which she quipped, is a “geometry problem, not a technology problem,” one that we “can’t Uber, Lyft or app our way out.” Technology, seemingly in contrast to transit, is not the “sole answer,” although Barry conceded that it will be “a critical piece,” especially for the “first mile and last mile.”

Interestingly, an event attendee who is also a potential contractor for the transit project and has been on several of the Chamber’s Leadership Study Missions to other U.S. cities to examine best practices on topics such as education, poverty and transit, told The Tennessee Star that “transit doesn’t fix traffic. It just offers alternatives.” 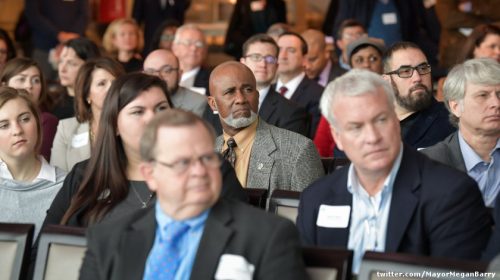 Nearing her closing, Barry took a more emotional approach toward an apparent myth, “We are powerless … Just let it happen … We can’t step up and make changes.” She countered, “We don’t wait for change. We create the change. Look at all we have done together, Bridgestone Arena, Music City Center. We are the driver of change. We can’t sit and wait for someone else.”

The mayor repeated the slogan from the beginning of her presentation, “Traffic today is the best day ever.”
Without directly tackling the transit plan’s $8.951 billion dollar price tag or the increases taxpayers will incur to pay for it, the mayor pitched yet another catch phrase, “Transit doesn’t fail cities. Cities fail transit when they don’t invest enough.”

Mayor Barry then answered more than two dozen questions submitted by audience members written on cards handed out at the registration tables, which she read aloud. The questions addressed a variety of topics from which these were the key takeaways:

1. The current Let’s Move Nashville plan is just the first phase, there will be more.
2. “Immediately after” May 1, bus service can be increased in frequency and longer hours.
3. The tunnel, while having a big price tag, is necessary because the roads are already taken up with no room for pedestrians and other forms of transportation, never mind pavement.
4. After the presumed passage of the referendum on May 1, public engagement will “double down” and is when “the real planning begins so we can figure out what it looks like.”
5. The state and Governor Haslam will create revenue streams, so that funds generated along Transit Oriented Development can go toward affordable housing.
6. The transit plan cost of $5 billion is in “today’s dollars,” although it was not clarified as what year the $9 billion cost is associated.
7. The sales tax, already being regressive and increasing to fund the transit plan, will be offset by reduced or free transit for those in need.
8. An autonomous vehicle program is being tested with community and technical college students, where there is significant dropout because of lack of transportation within one mile.
9. Four taxes – business and excise, sales tax, hotel/motel and rental car – will increase at a cost of $5 per month or $0.17 per day on average per person for the first five years.

The last two speakers focused on voter registration and voter turnout, likely assuming new voters would be in favor of the transit plan.

The closing remarks were made by Ralph Schultz, Nashville Area Chamber of Commerce CEO, who encouraged business owners and managers to not only vote themselves, but to also allow employees to vote on their way in, on their way home or during the day, even going so far as to say, “Take people to the polls if you have to.”