With the votes of 16 out of the 22 Wilson County Commissioners, businessman Clark Boyd was appointed to serve in the Tennessee House of Representatives through the 2018 election cycle.

“Thank you to the Wilson County Commission for their appointment to serve the 46th district. I embrace the opportunity to serve my community and I look forward to getting to work!” Boyd posted on his Facebook page.

The State District 46 seat, formerly held by conservative State Rep. Mark Pody (R-Lebanon), was vacated last month when Pody won the special election to replace his long-time friend and ally Mae Beavers, who in turn resigned her State Senate seat to focus on her run for Governor. 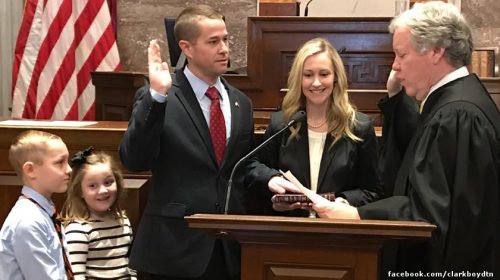 Fellow candidate, well-known activist Menda Holmes, withdrew her name from consideration for the appointment, and called on the commissioners to select an interim appointee who was not currently a candidate that would act as a “place-holder” until the regular elections concluded.

As The Tennessee Star reported:

The second issue is relative to the appointment of a declared candidate, which has the potential to give the candidate an advantage in the election, running as the incumbent, and can also put the appointee in an obligatory position with the county commission for such incumbent advantage.

Open Secrets reports that being the incumbent is a significant advantage at the national level, where, from 1964 to 2016, incumbents in the U.S. House of Representatives were re-elected at a rate of greater than 80 percent and U.S. Senators to a lesser degree, but 20 out of 27 elections the rate was at or greater than 80 percent.

Boyd will continue to campaign for the chance to serve a full term as the State Representative for District 46 in the upcoming primary election in August where he will face Holmes.