NASHVILLE, Tennessee — The Beacon Center of Tennessee hosted a free conference open to the public on Saturday featuring the nation’s foremost experts discussing “Off Track: What’s Wrong with Nashville’s Transit Plan & What We Should Do Instead.” The title reflects the sentiment of attendees, primarily interested citizens versus special interest groups, that there is a congestion problem in the greater Nashville area that needs a solution, but one that is more efficient and cost effective than the $9 billion Let’s Move Nashville plan being put to referendum on May 1. 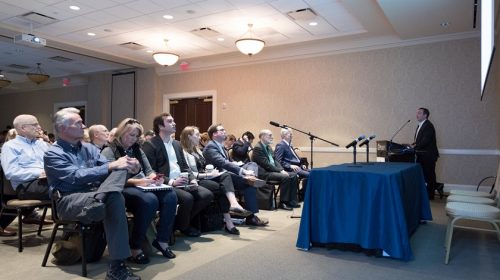 John Cerasulo, Chairman of the Board of Directors of the Beacon Center of Tennessee, in his opening remarks, said with the Let’s Move Nashville plan at a cost of approximately $9 billion being the largest and most expensive project in Nashville’s history, it deserves further discussion and debate. Everyone having heard the plan and “plenty on the pro-transit side,” an alternative view would be presented.

Perhaps more insidious, Cerasulo pointed out, is that the mayor has said, “There is no Plan B,” adding, “It’s either the mayor’s plan or total gridlock, complete chaos, dogs and cats living together.” 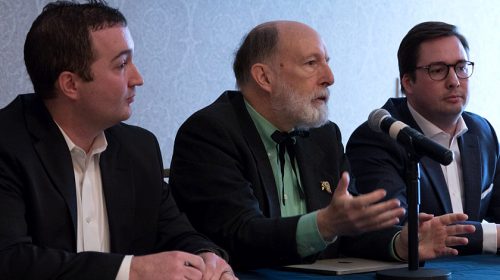 Randal O’Toole, as the first presenter, had no problem livening the room early on a Saturday morning, opening with a slide of a 1938 train while making the point that he loves passenger trains, helped restore the vintage Baldwin in the picture and owns four of the rail cars. But, he added, light rail should be called “lie rail,” because it weighs more than heavy rail. The “light” refers to capacity.

After rattling off a dizzying array of statistics accompanied by slides that put the “one picture is worth a thousand words” into action, O’Toole was followed by the other two panelists with their presentations who then joined together for a Q&A session. After a brief break, the same process was repeated with the second panel.

The information presented, so thorough, in-depth and data-driven, had many attendees taking pictures with their cell phones to capture the slide presentations while furiously writing notes on event topics that included: Federal Light Rail Funding: Trends and Tribulations; Crazy Train: The Wrong Plan for the Music City; A Cost-Effective, High-Quality Transit Solution; The Future of Passenger Surface Transportation is Trackless and Driverless.

Using the popular television program Shark Tank format, Beacon Center’s Shultis framed his presentation around four questions: How much are we investing, how long to recoup our investment, how risky is the investment and what can we expect for our returns. 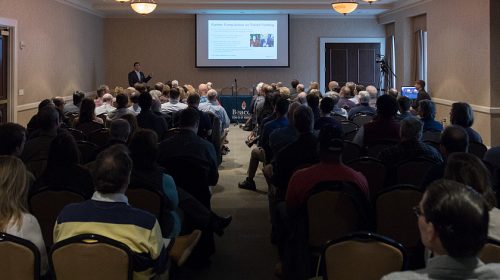 Answering those questions revealed some shocking data including a per person cost for the completed plan of $13,080 or $33,882 per household to Nashvillians. Even adjusting for the plan’s purported 47 percent of sales tax coming from outside Nashville, the cost is $5,320 per person or $13,782 per household. The estimated completion date for the current plan is 2032, which translates into congestion plus 14 years of construction. However, the increased taxes to fund it will go more than three decades longer until 2068, meaning that, on average, only those born in 1990 or later will be alive when the tax surcharges expire.

Seeming somewhat obvious once mentioned, post-World War II regions, after the automobile had been introduced, call for different transportation plans than pre-World War II, which were developed around walking and streetcars and have very high central city densities. The post-World War II region solutions include managed lanes with transit, managed arterials with transit, general purpose lanes, bus-based transit system, ITS (Intelligent Transportation System) features, most of which don’t seem to have been considered in the Let’s Move Nashville plan.

Arguably, the most noteworthy point was a comparison of the same $4.3 billion to get 29.9 miles of light rail in the Let’s Move Nashville plan: Every existing bus could be replaced with two battery-operated buses as well the operation and maintenance costs and free bus rides for 20 years; the entire 219 miles of freeways through the metro area could be expanded with an additional two lanes of elevated expressway at $7 million per lane mile; every single student in Metro Nashville Public Schools could receive a new Apple laptop computer every three years for the next 20 years. And, remarkably, there wouldn’t have to be a choice between those three options. All of them could be done for the $4.3 billion price tag for the light rail. “That’s how stupid” the light rail portion of Let’s Move Nashville Plan is.

Other notable highlights from the presenters:

The political action committee to defeat the May 1 referendum, NoTax4Tracks.com, was introduced by Lee Beaman.

The Beacon Center of Tennessee plans to post online the video of the event.

4 Thoughts to “Experts at Beacon Center’s ‘Off Track: What’s Wrong With Nashville’s Transit Plan & What We Should Do Instead’ Summit Slam Mayor Barry’s Scheme”