President Donald Trump delivered his first State of the Union address to a joint session of Congress in a smooth and powerful delivery that focused on “a New American Moment.” 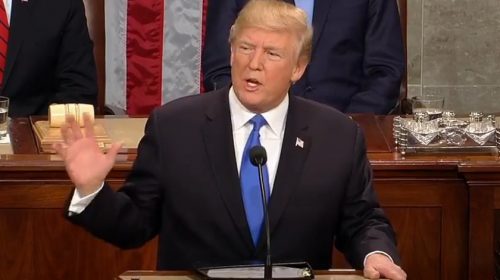 “This is our New American Moment. There has never been a better time to start living the American dream,” the president said.

Trump called for bipartisan support of his plan to secure the borders and reform immigration, which he called a compromise “down the middle” that consists of four pillars:

1. A 12 year path to citizenship for the 1.8 million illegal immigrants who came to the country as children.
2. Funding for a secure border wall.
3. And end to the immigration visa lottery.
4. An end to chain migration.

“Americans are dreamers, too,” Trump said, to great applause.

Throughout his one hour and 20 minute speech–one of the longest State of the Union addresses in history–Trump introduced and honored members of the audience who personified the American dream.

A police officer and his wife who adopted the child of a woman addicted to opioids, a soldier who saved the life of his comrades, the parents of two young girls murdered by illegal immigrants, and the parents of the American college student who was imprisoned in North Korea and returned mortally ill to the United States, dying just days after his return.

Democrats in the audience showed bad manners throughout the night, sitting on their hands, rather than joining in applause for the string of economic successes mentioned by President Trump

“It was really striking how sour they all looked,” FoxNews analyst Britt Hume observed immediately after the speech.

Reactions on Twitter gave bad reviews to the lack of respect and good will demonstrated by the Democrats to the president: 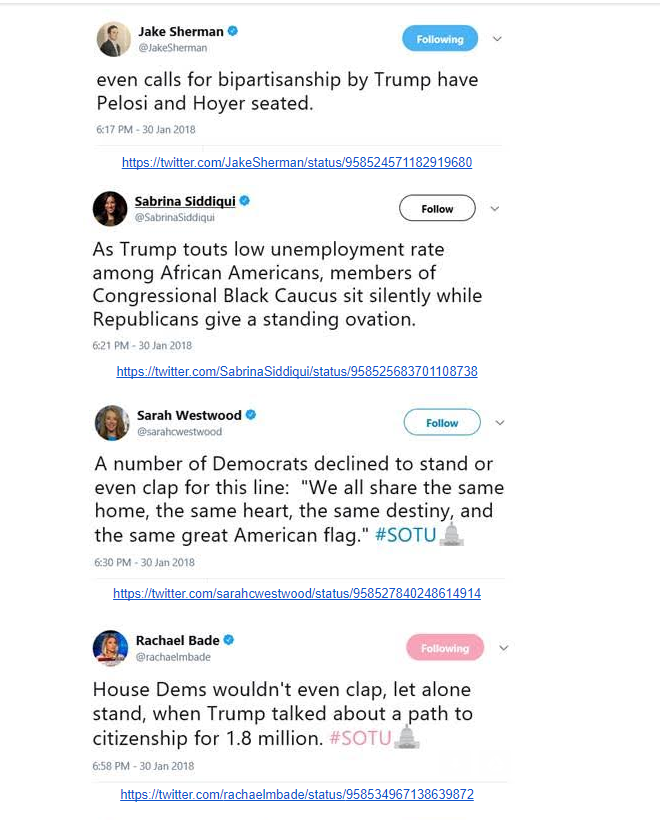 Despite the unhappy and negative Democrats in the audience, Trump reviewed the tremendous accomplishments of his first year, to much applause for the gallery and Republicans in attendance. 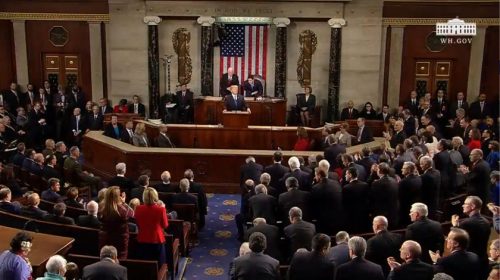 “Just as I promised the American People from this podium 11 months ago, we enacted the biggest tax cuts and reform in American history,” Trump said, adding:

Since we passed tax cuts, roughly 3 million workers have already gotten tax cut bonuses – many of them thousands of dollars per worker.

“In our drive to make Washington accountable, we have eliminated more regulations in our first year than any administration in history,” Trump said.

The president also called for a major new infrastructure initiative.

“I am asking both parties to come together to give us the safe, fast, reliable, and modern infrastructure our economy needs and our people deserve,” the president said.

He also pointed out the great success America has had militarily in his first year in office.

“Last year I pledged that we would work with our allies to extinguish ISIS from the face of the earth. One year later, I’m proud to report that the coalition to defeat ISIS has liberated almost 100 percent of the territory once held by these killers in Iraq and Syria. But there is much more work to be done. We will continue our fight until ISIS is defeated,” the president said.

What an encouraging and uplifting message from our President @realDonaldTrump tonight! America truly is back on the right path, and I was honored to hear @POTUS in person! #SOTU

“I just left the floor from the President’s State of the Union speech tonight. I have to tell you, I was really pleased that he focused so much on the military and on our nation’s security, both domestic and abroad,” Blackburn said.

“Wasn’t it great to hear him take some credit, and talk about the good things that have happened for all of us in the country this year: jobs growth, wage increases, getting regulations down so that we can manufacture in this country again. A big night on Capitol Hill. Hope you were able to watch,” she concluded.

After a first year of tax cuts, reduced regulations, & conservative judges, I’m glad to hear the president’s optimism about tackling the tough issues ahead of us. With his leadership, we can strengthen our borders, address DACA, lower health care costs, & fight the opioid crisis.

“President Trump’s first year in office has been marked by policies that uplift the American people, strengthen our nation’s economy, and keep our communities safe,” said Chairwoman McDaniel. “From the Tax Cuts and Jobs Act to rebuilding our military and working to defeat terrorism, the President has made the well-being of every single American his priority. He is committed to restoring our depleted infrastructure, securing our borders, and pursuing fair trade deals during his next year in office.”

“President Trump’s speech tonight was a home run. Congress needs to unite behind the President’s vision for a safe, strong, and proud America – now and in the years ahead.”

You can read the full transcript of President Trump’s State of the Union speech here.