For the first seven years of Governor Haslam’s term, his budget for the State of Tennessee grew a record $30.2 to $37.3 billion, but the upcoming budget for 2018-19, Haslam’s final year in office, is basically flat at $37.5 billion. 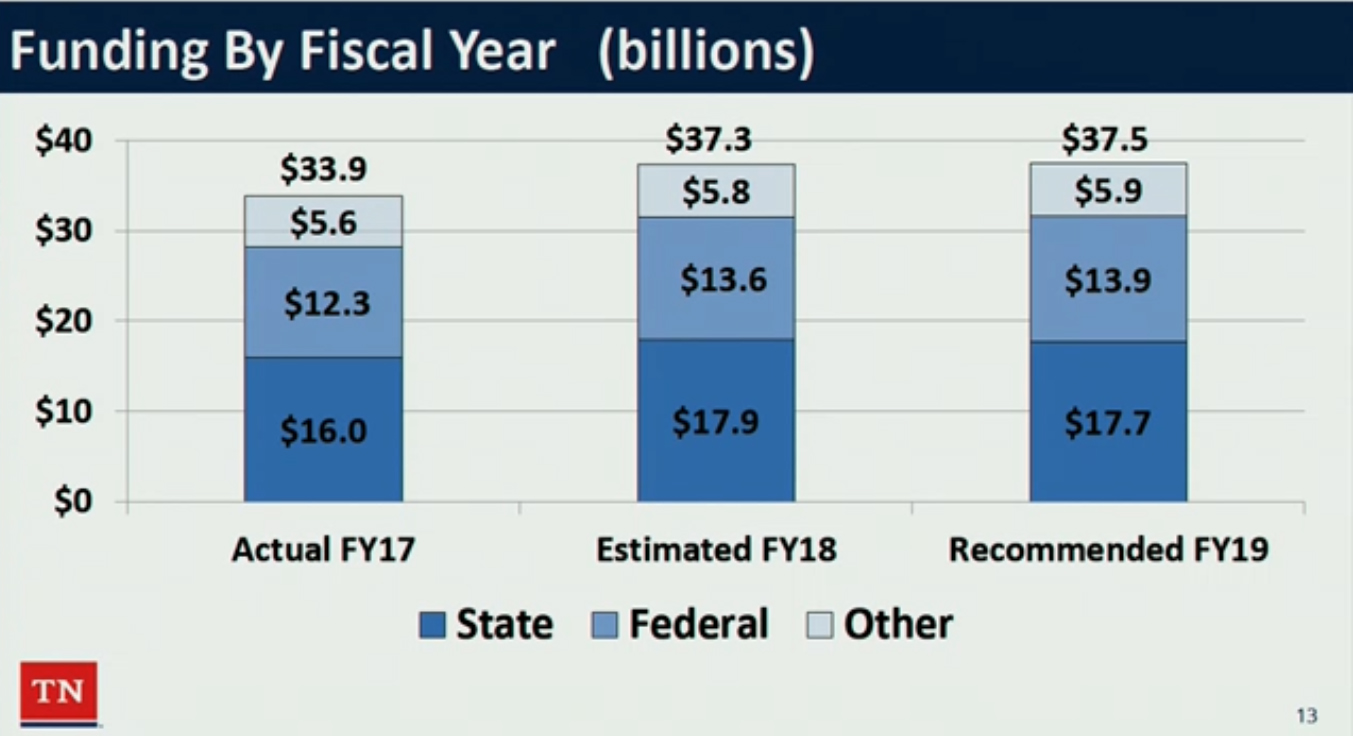 Budget appropriations are stated in three categories: State at $17.7 billion; federal at $13.9 billion and $5.9 billion from “other.” Over the past seven years, the state portion of the budget grew an average of four percent with a range of a $40 million reduction in 2014-15 to the highest increase of $1.5 billion in 2017-18, but this year that portion of the budget is reduced an eight-year record of $190 million.

State Commissioner of Finance and Administration, Larry Martin, explained in his presentation on the 2018-19 budget to the Senate Finance Ways & Means Committee Tuesday the process for forecasting revenue for the state.

The State Funding Board, in November of each year, receives forecasts from four economists, including the State Department of Revenue, from which recommendations are made on the likely growth trends. The funding board provides a projected growth range to the governor, which was 2.7 to 3.2 percent for this year. The governor then has prerogative to budget with any value within that range, and for this year he chose to adopt the high end of the range, which is 3.2 percent or $375 million.

Martin reported the available recurring revenues at $460.2 million and non-recurring at $436.6. While he referred to that as “a good bit of money,” he also provided the point of reference for this time last year at $470.2 million and $1.1 billion, respectively. Martin counseled that fiscal year 2018, and leading into it with fiscal year 2017, was somewhat unusual. “This is more normal,” and not necessarily anything to be concerned about.

The budget continues the trend of Governor Haslam increasing funding for education for both K-12 and higher education. About half of the $211.8 million in K-12 increases at $55.1 million is for teacher compensation and $50 million for retirement and insurance. The balance is budgeted for growth and inflation at $48.8 million, enrollment growth at $18 million, one interventionist per 2,750 students or at least one per LEA (Local Education Agency) at $13.3 million, priority schools investment grants at $10 million, charter schools facility fund at $6 million and “Read to be Ready” at $4.5 million.

Through an exchange with the Commissioner and committee members, it was revealed that the average raise, “if spread equally across the board,” would be approximately 2 percent, according to the Commissioner. However, the Commissioner also clarified that the funds are provided to the LEAs for teacher compensation, but that the LEAs have independent to “allocate those dollars in accordance with their salary and approach,” in other words, “it is at their discretion how it is distributed.”

Chairman Watson explained to the Commissioner that members vote on increasing compensation for teachers, but when they get back to their districts, “it’s not necessarily distributed in the fashion we intended.” Commissioner Martin understood the sensitivity of that and that Education Commissioner Candice McQueen would be prepared to address that when she appeared before the committee.

More than a third of the higher education increases of $99.1 million will go to a 2.5 percent salary pool at $37 million. The balance of the increases will go toward operational costs at $28.6 million, student assistance awards at $10 million, group health insurance at $6.1 million, university research fund at $5 million, Advise TN at $2.5 million, college coaching for community college students to assist them in the transition from high school so they can successfully move toward their certificate and achieve “our Drive to 55” at $1.3 million and Veteran Reconnect grants at $1 million.

“Job Growth Investments,” referred to by critics as corporate welfare, will see new funding of $128.3 million, $80 million of which is slated for the FastTrack grant program. Broadband Accessibility grants will be allocated $10 million against requests for $60 million, according to Commissioner Martin. The rural development fund will receive $12.5 million, St. Jude’s Children’s Hospital will receive it’s third of three allocations at $12 million, $3.2 million will go to the Film & Entertainment Commission, $3 million to Launch TN grants, $3 million to Oak Ridge Manufacturing Research grant and $2 million to the Rural Opportunity Fund.

The Rainy Day Fund will be increased by $50 million for a total $850 million at the end of fiscal year 2019 on June 30. The fund has steadily increased since Haslam took office January 2011 when it was $257 million, to where it has reached about 5.9 percent against a goal of 8 percent of the General Fund revenues, which would be approximately $1.15 billion.

For the first time in two years, the budget proposes bond authorizations of $118 million of the total $443 capital budget, which comes with a recurring $13 million allocation for debt service. Further details will be provided by Commissioner of General Services, Bob Oglesby, when he makes his presentation to the committee.
Savings of $78.6 million come through reductions in discretionary spending of 1.3 percent against a challenge of 2.5 percent. 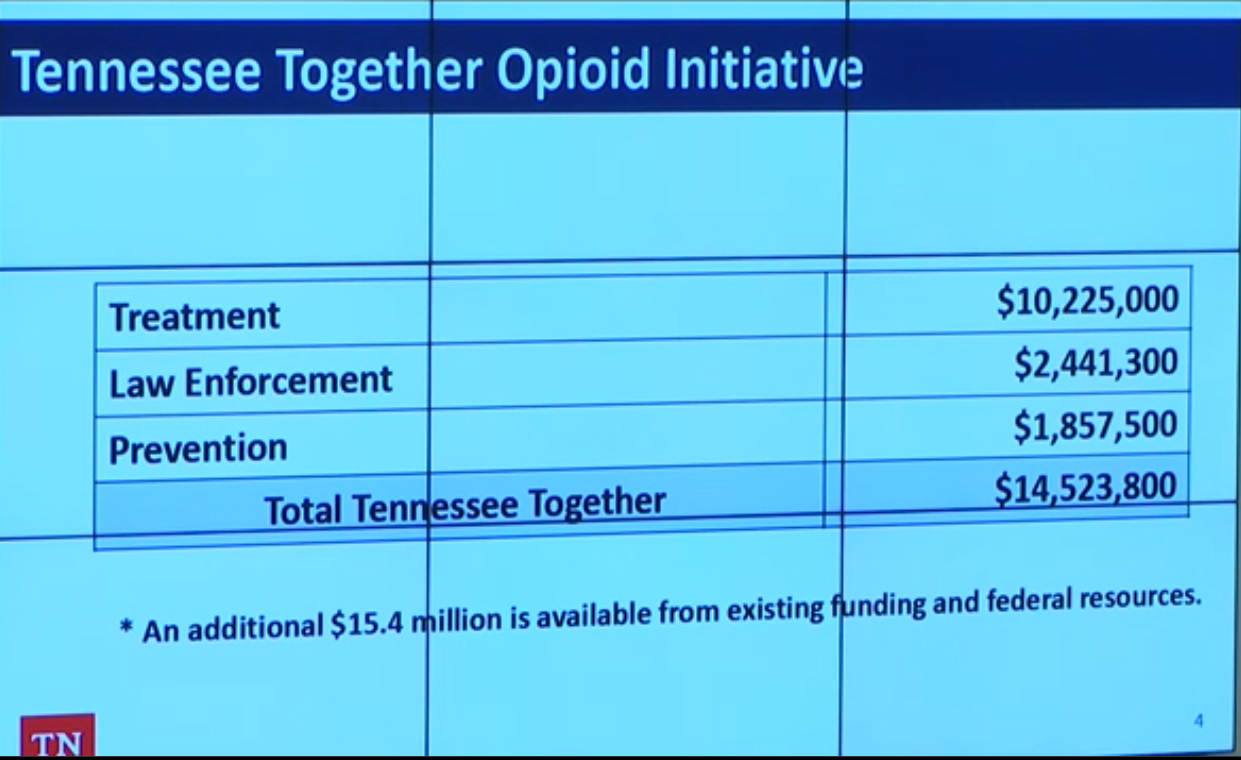 Of the 335 base positions that were reduced, all but six were open for three years or more.

The new state museum, which is expected to be opening on schedule later this year and “well within budget,” will require an additional $3.5 million in operating expenses due to the larger facility as well 12 additional positions, for a total of 60, which is “comparable to other museums of that size.”

One of the state’s most urgent issues, the opioid epidemic, is being addressed through Governor Haslam’s Tennessee Together Opioid Initiative. The program will be allocated an additional $14.5 million dollars, including $10 million for treatment, $2.4 million for law enforcement and $1.9 million for prevention. It was footnoted that “an additional $15.4 million is available from existing funding and federal resources.”

2 Thoughts to “After Seven Years of Record Growth, Governor Haslam’s Final Budget For 2019 Is Flat From 2018”