NASHVILLE, Tennessee – The Heartbeat Bill passed through the House Health Subcommittee on Wednesday and is headed for the full House Health Committee.  The bill has been under consideration in the Tennessee General Assembly for more than a year,

The bill, which has seen its share of challenges, along with its six amendments was the only item discussed in the subcommittee. After five amendments were dispensed with, the amendment that “made the bill,” was introduced by the sponsor of the main bill, Rep. Micah Van Huss (R-Jonesborough). 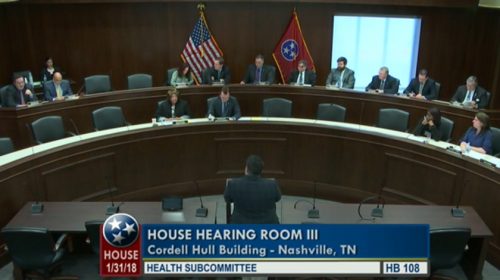 Van Huss began by recognizing and appreciating the many people who, over the last 12 months, worked, prayed and called for the Heartbeat Bill to protect the unborn, and added, “If the unborn could speak, they would thank you as well.”

Not having the votes to pass the bill through the Subcommittee in its current form, Van Huss offered an amendment that would “still save lives.”

Citing a statistic from preborn.org, Van Huss said that 80 percent of mothers who see an ultrasound choose life.

The amendment to the bill increases a pregnant woman’s choices, requiring that “if an ultrasound is performed as part of the examination prior to performing the abortion, the person who performs the ultrasound shall offer the woman the opportunity to learn the results of the ultrasound.”

The bill also requires that “If the woman elects to learn the results of the ultrasound,” then the woman shall be informed “of the presence or absence of a fetal heartbeat.”

The other main language of the bill relates to reporting requirements. If an ultrasound was performed prior to the termination of a pregnancy, the detection of a heartbeat and documentation that the patient was informed of the presence or absence of a heartbeat shall be recorded.

In its report of select induced termination of pregnancy data, the State Department of Health shall include the data about the detection of heartbeats and the method of pregnancy termination. However, protecting the woman’s right to privacy is specifically addressed by stating that nothing “shall be construed to require the release of data in a manner that could identify individual patients.”

Van Huss reaffirmed his personal commitment to the unborn, “As long as the citizens of District 6 continue to send me to Nashville, I will not stop fighting for the lives of babies until abortion is abolished in Tennessee,” but clarified to the questioning of Rep. John Ray Clemmons (D-Nashville), “That is not the intent of this legislation.”