Shortly after traveling alone with Sgt. Robert Forrest, head of her security detail during the period of time Mayor Megan Barry admitted to their on-going adulterous relationship, she lectured students at Belmont University about the role of ethics in government.

Less than two weeks after her trip to D.C. with Sgt. Forest, on March 22, 2017, Mayor Barry spoke to Belmont University’s Student Center for the Public Trust (Student CPT) telling students that “people have to have faith that their government is ethical.” 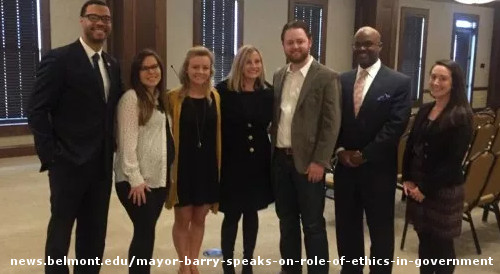 The Student CPT is “a national network of college students who demonstrate a commitment to ethical leadership.” There are a total of 6 Student CPT chapters at Tennessee schools, all supported by the national Center for the Public Trust whose stated mission is “to champion the public trust by advancing ethical leadership in business, institutions and organizations.”

According to a news release from Belmont’s Office of Communications, the Mayor talked about the role and importance of ethical leadership even while admitting that it’s not always a simple matter to capture “what an ethical situation looks like.” She also told the students that, “people have to have faith that their government is ethical.Without this faith rooted in the community, everything else can easily fall apart,” a statement strikingly similar to the ethical guidelines set forth in her 2016 Executive Order 005.

The Mayor was also quoted as saying that “‘[w]e teach our kids to tell the truth. We also teach our kids to be loyal,’ Barry said as an example. ‘The issue comes when they have to make a decision of both truth and loyalty.'”

The Tennessee Star contacted Mr. Harold Fogelberg, Director of Belmont University’s Center for Business Ethics. Fogelberg  also serves as the faculty advisor to the school’s Student Center for the Public Trust. The Star asked Mr. Fogelberg the following questions about the Mayor’s March 22, 2107 lecture to the students:

In light of the Mayor’s disclosure about her two year affair with the head of her security detail, have you discussed with your student chapter whether or how this impacts her credibility as a government leader should she remain in office?

Also, in light of the Mayor’s admission to the two year affair, would consider having her speak to your students at any time in the future on the issue of ethics? Why or why not?

As the Director of the Center for Business Ethics, what is your professional opinion whether the Mayor’s two year affair with the head of her security detail including during the time she traveled alone with him on trips paid for with public funds, negatively impacts the Mayor’s credibility on any other leadership issues that might involve an ethics component?

No response has been received.

During an extended interview Police Chief Anderson admitted that a relationship such as the one between the Mayor and Sgt. Forrest, could “cloud” one’s judgment on the job. A formal ethics complaint filed by Community Oversight Now alleges that the Mayor’s sexual relationship with Sgt. Forrest, while he was an active duty police officer, biased the Mayor’s position on certain matters relating to the police department.

While the Mayor and her office insist that her adultery is a personal matter, Barry admitted that “I knew it was wrong but I did it anyway.” She has steadfastly maintained that nothing illegal occurred and no policies were violated.  The Mayor’s professional experience as an ethics and compliance officer could possibly have helped her avoid technical rule and policy violations but may not help her skirt the intent, spirit and purpose of ethical guidelines like those she issued in her Executive Order 005:

I. The maintenance of high standards of honesty, integrity, impartiality, and conduct by employees and agents of the Metropolitan Government is essential to the proper performance of government business and the maintenance of confidence by citizens in their government; and

II. The avoidance of misconduct and conflicts of interest on the part of employees of the Metropolitan Government is indispensable to the maintenance of these standards.

The Mayor has been deliberately vague on the precise starting and ending dates of her affair with Sgt. Robert Forrest but has insisted that every trip on which they traveled alone together, was in furtherance of city business. By the Mayor’s own admission, however, the time stamp she provided means that public funds provided opportunities to facilitate the adultery in which the Mayor and Sgt. Forrest engaged.

It is not clear, however, what city business the Mayor was conducting on the March trip in question when she traveled alone with Sgt. Forrest to speak to the International Association of Fire Fighters (IAFF) in Washington, D.C.

No expenses for lodging are noted on either the Mayor or Sgt. Forrest’s expense record for those dates.

Police Chief Anderson also seems to be relying on rules which technically do not penalize the adultery between the Mayor and a working Metro police officer. As Chief Anderson explained, Sgt. Forrest’s chain of command and direct supervisor is the Specialized Investigations Division which technically means that as far as the police department is concerned, the Mayor is not his supervisor so there is no supervisor-subordinate issue and no rule or policy was violated by their sexual relationship.

However, Chief Anderson has pointed out multiple times that Sgt. Forrest’s schedule, hours and day to day directions were dictated by the Mayor’s office. Whether investigations conducted by the TBI or the Council’s Special Committee consider this arrangement as making the Mayor’s office the de facto supervisor of Sgt. Forrest is unknown at this time.

8 Thoughts to “After Returning Home From Travel With Lover Whose Expenses Were Paid by City, Mayor Barry Lectured Belmont Students on Ethics”