Since first admitting to a two year long extramarital affair with the head of her security detail, Sgt. Rob Forrest, Nashville Mayor Megan Barry has maintained that Metro Police Chief Steve Anderson insisted that a security detail travel with her at all times, and that all of Forrest’s travel with her was approved by the Metro Nashville Police Department.

But in a blockbuster report that aired on Friday, NewsChannel5’s Phil Williams revealed that documents obtained from the Mayor’s office which purport to show Chief Anderson approved Forrest’s travel with her are factually incorrect.

As The Tennessee Star has reported, Mayor Barry and Sgt. Forrest traveled alone together at taxpayer expense on nine occasions in 2017 on trips to Athens, Greece, San Francisco, California, and Washington, D.C., among other places.

They also traveled together when accompanied by other Metro Nashville employees to other cities, including one memorable trip from October 20 to 25 of 2017 to Paris, France.

“But documents released today by the Mayor’s office say he did. So what’s the truth?” Johnston’s co-anchor asked.

“Did you approve the trips to Greece, for example,” NewsChannel 5’s Phil Williams asked Chief Anderson.

The travel documents obtained by Williams from the Mayor’s office on Friday purported to show that Anderson had, in fact, approved those requests, but an investigation Friday by Metro Nashville’s IT Department concluded, fairly quickly, that Anderson had not, in fact, approved those travel requests, and the documents presented to NewsChannel5 by the Mayor’s office contained that false representation due to “a computer glitch.”

In a Travel Authorization form submitted by Sgt. Forrest on October 4 at 3:02 pm for the October 20 to 25 trip to Paris with Mayor Barry and other Metro Nashville employees, the “history” section claimed that the Mayor’s Chief of Staff, Deborah Mason, was notified of the request at 3:02 pm and that Police Chief Steve Anderson purportedly approved the request at 5:45 pm, at which time Eugene Nolan, Deputy Director of the Finance Department, was notified. Nolan approved the request the following day, on October 5 at 12:22 pm, at which time the request was deemed “completed.”

When NewsChannel 5 pointed out this error to the Mayor’s office, they called it “a glitch.”

But a more troubling explanation may apply as well.

Chief of Staff Mason was notified at 3:02 pm, but inexplicably, Police Chief Anderson was not.

The system appears to be set up so that an approval can come only after an individual has received a notification.

But the notification sent to Mason was immediately followed by an approval, purportedly by Anderson, according to the Mayor’s office. But Anderson was never notified.

“Chief Anderson never saw any of those,” Don Aaron, MNPD spokesperson, told Williams of the documents provided to NewsChannel 5 that purport to show Anderson had approved Forrest’s travel authorization documents for trips with Barry.

“Every travel request from a member of the Police Department is routed to him. These were not,” Aaron added.

After an audit, Keith Durbin, the head of Metro Nashville’s Information Technology Services department wrote in a memo obtained by NewsChannel 5:

After completing the investigation, ITS has concluded that due to a long undiscovered system flaw affecting an infrequent situation, Chief Anderson did not receive nor approve Sgt. Forrest’s travel requests pursuant to protocol. 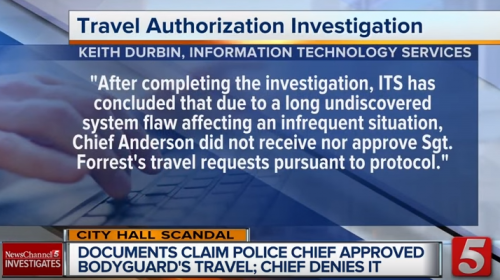 “According to the memo, the travel for Sgt. Forrest and other members of the mayor’s security detail was approved by the Mayor’s chief of staff,” NewsChannel 5’s Williams reported.

Debbie Mason, the Mayor’s chief of staff, is listed as the first person notified in the travel authorization documents submitted for approval by Forrest.

In a separate report, Fox17 noted that documents provided to them by the Mayor’s office also purported to show that Police Chief Anderson had approved a trip by Forrest to Washington, D.C. to provide security for Mayor Barry.