Renata Soto, the Donald Trump-bashing chairman of the board of UnidosUS (the new name adopted by the George Soros-funded National Council of LaRaza in July 2017), and founder and head of Conexion Americas, the Nashville affiliate of UnidosUS, was one of the featured speakers at Saturday’s kickoff of the Transit for Nashville campaign to support the passage of the tax increasing transit plan on the May 1 referendum before Nashville/Davidson County voters.

Soto was joined by former Nashville Vice-Mayor Howard Gentry and Rep. Jim Cooper (D-TN-05) as the featured speakers in the 22 minute kickoff event. Notably, embattled Nashville Mayor Megan Barry, who two weeks ago admitted to conducting a two-year-long extramarital affair with her bodyguard, was not one of the event’s featured speakers, though she was, apparently, in attendance.

“My name is Renata Soto and I am with Conexion Americas, one of almost 120 coalition members who are so excited to get this campaign kicked off today,” Soto began.

“Are we ready for transit?” she asked the crowd

“Our coalition represents almost 300,000 Nashvillians. We have collected more than 30,000 signatures. We have hosted more than 200 community events. And we know that with your support, your enthusiasm, your knocking on doors, your telling people about Transit for Nashville, it’s going to make sure that on May 1st, we’re going to be again, proud of our city coming together saying that this investment, as Mr. Gentry said, will connect all that our city has to offer each other, and citizens to those opportunities,” Soto continued.

“My organization, Conexion Americas, is here on Nolensville Road, and I am so glad we are meeting here at Plaza Mariachi, one of the newest jewels in Nashville,” she added.

Soto then made the case that the $9 billion tax increase was needed to fund the transit plan because “transit is not just about a fancy rail that might come our way.”

It was needed, she argued, to fund improved bus services and “more crosswalks on Nolensville Pike.”

Here on this site and in South Nashville, the area of the city that has grown the most in the last 15 years, we understand what it is to be connected, or not.”

“It is a very great area for cars, but it is hard to move around as a pedestrian, as a bicyclist, and we understand that transit is not just about a fancy rail that might come our way. We understand that it is going to improve bus service, but we also know that it’s about those other things that connect us, as businesses, as residents.”

“And we are excited that on May 1st, Nashvillians get to say ‘we want to pay for this.’ We know that it’s one of the greatest investments we can make in our city because we want to connect jobs, we want to connect some businesses in our own neighborhood.”

“We want to have the opportunities for young people to get to internships and to be able to just enjoy all that our city has to offer.

Thank you for being here today.

“I know that we count on your support between now and May 1st to make sure we are glorious and celebrating a win on May 1,” Soto concluded.

No member of the media in attendance asked Soto why “more crosswalks for Nolensville Pike” could not be funded out of the current Metro Nashville budget.

Soto’s political activism has not been limited to supporting her good friend Megan Barry’s $9 billion “Transit for Nashville” backed transit plan referendum. She has aggressively used the resources of Conexion Americas to attack the political agenda of President Trump, as well. 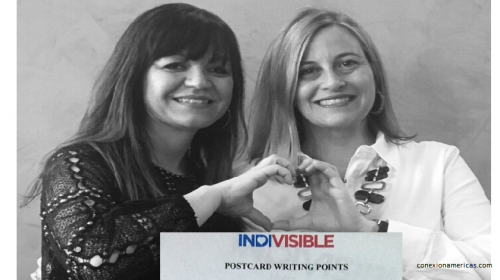 “Despite trying to use hands-contorted-into-hearts to try and soften the radical opposition of the progressive left’s “Indivisible” campaign, Conexion Americas’ “Indivisible” organizing is no different than any of the other self-identified “Indivisible” groups that have formed to resist President Trump’s agenda for America,” The Tennessee Star reported back in July:

A number of left wing Nashville political figures, including Mayor Megan Barry, have posed for photos with Renata Soto, co-founder and director of Conexion Americas, displaying the “hands-contorted-into-hearts” sign.

Last week, Conexion’s Gini Pupo-Walker, senior director of education policy and strategic growth, told The Tennessee Star that “[w]e didn’t know there would be other groups using the same word.”

However, looking at Conexion’s twitter promotion of other “Indivisible”groups, the Indivisible Guide itself, and alignment by Conexion on key issues included in The Guide, strongly suggest otherwise.

“Beginning in 2012, Soto served as the vice-chair of La Raza’s board until she was elected as chairman in 2015. She remains listed as Chairman for La Raza’s 2017-2018 slate. Both La Raza and the NILC [the National Immigration Law Center] receive funding from George Soros’ Open Society Foundation. Soto’s Nashville organization, Conexion Americas receives continuing support from La Raza,” The Star reported just prior to LaRaza’s decision to change its name to ‘UnidosUs’:

“Indivisible” groups like Conexion’s that began organizing on the heels of Trump’s election, were initially united in opposition to the administration’s agenda on illegal immigration and refugee resettlement but have added opposing any action to repeal/and or replace Obamacare. During his campaign Trump vowed to dismantle these parts of Obama’s legacy. The primary goal of the Indivisible Guide was to roadmap how progressive activists could get their “MoC” (member of Congress) to buckle under loud, intense and unceasing opposition to the Republican-led administration and Congress.

To this end, the Guide provides “Resistance Resources” on issues including immigration, healthcare and local organizing and even more issue insights through the “InvisiBlog.” Last week Conexion Americas held another “Indivisible” event, during which attendees were encouraged to write postcards to Senators Bob Corker and Lamar Alexander and Rep. Jim Cooper using pre-printed messages on immigration and healthcare issues.

Predictably, the information and writing prompts provided by Conexion align with the national “Indivisible” movement’s opposition. 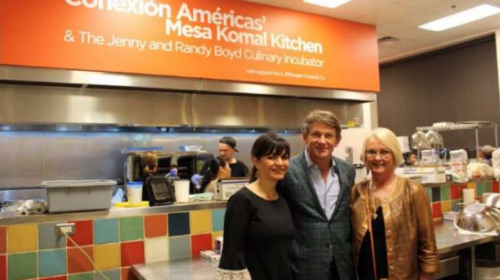 You can hear Soto at Saturdays Transit for Nashville campaign kickoff beginning at the -19:26 mark here and below: