Speaker Beth Harwell (R-Nashville) cast the tie-breaking vote on Tuesday to move the controversial “Medical Cannabis Act” out of the  Criminal Justice Subcommittee. Harwell, who is one of four candidates seeking the Republican nomination for governor, was called in to the subcommittee already in progress to join two Democrats and one Republican who voted in favor of the bill, and cast the fourth and deciding vote against the three Republicans who voted against the bill.

Harwell, who is not a member of the subcommittee, has the authority to participate in any subcommittee or committee vote, either in person or through a designee, to break a tie. In a controversial move last year, Harwell designated Speaker Pro Tem Curtis Johnson to break the tie on the IMPROVE Act in the House Transportation Subcommittee.

Harwell’s vote was made in direct opposition to the unanimous opposition of the Tennessee law enforcement community, which was voiced during the subcommittee hearing by the Executive Director of the Tennessee Sheriff’s Association and the Chief of the Brentwood Police Department; three members of the Tennessee Bureau of Investigation; an elected district attorney who also serves as the Legislative Committee Chairman for Tennessee District Attorney Generals Conference.

The bill was also opposed by two medical doctors from the Tennessee Department of Health (TNDH). 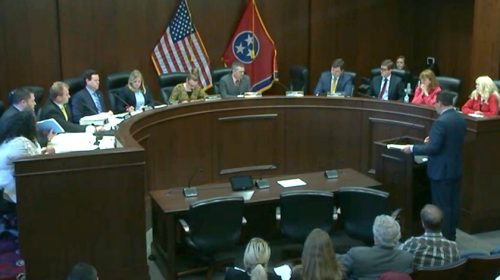 In a standing room only committee room with overflow observers being accommodated with monitors in an additional committee room, the Criminal Justice Subcommittee meeting chaired by Representative Tilman Goins (R-Morristown), went about an hour and a half before taking a vote on HB1749 “Medical Cannabis Act.”

The bill was introduced to the subcommittee by House sponsor Rep. Jeremy Faison (R-Cosby), whose home county legislative body passed a resolution last week opposing the passage of the Act.

Testimony on both sides of the issue was given by witnesses who also participated in follow-up question and answer periods with the subcommittee members. Witnesses speaking in favor of the bill included a mother whose young daughter, suffering from seizures, realized significant relief at a substantial cost savings to the State of Tennessee; a former assistant district attorney; and, David Smith, formerly of Governor Bill Haslam’s staff now with DAS Consulting on behalf of the Tennessee Medical Cannabis Trade Association, who presented a video.

Committee member Rep. Lamberth went through the list of diseases included in the bill and asked if there was evidence that medical marijuana either cured or helped each disease.

The medical doctors from the TNDH referenced a National Academy of Medicine report that has a chapter devoted to which diseases might respond positively to medical marijuana, to respond to Rep. Lamberth’s question. Most of the diseases in the “Medical Cannabis Act”under consideration in the subcommittee, they said, were not on the positive respond list in the research paper.

The Police Chiefs and Sheriffs also testified in opposition to the “Medical Cannabis Act.”

“We stand united” with other law enforcement organizations that are opposed to this bill, Terry Ash, Executive Director of the Tennessee Sheriffs Association and Brentwood Police Chief Jeff Hughes, representing police chiefs, stated.

When asked whether he had looked at how dispensaries in other states have dealt with black market distribution, Ash stated that a law enforcement colleague in Colorado told him that dispensaries were selling  out the back door illegally as well as out the front door legally.

Ash added that states that have have legalized medical marijuana are all over the board in terms of the impact it has had on crime and law enforcement.

“So many people have their hands in the till right now,” he noted, adding “we know this is big money [that’s] got it’s hand in it.”

“We’re asked to enforce one federal law but turn a blind eye to another federal law,” Ash said.

The constant theme from all the law enforcement witnesses was the need to maintain “the rule of law,” and the negative impact legalizing medical marijuana has had on it.

Police Chief Hughes noted that a traffic stop in Metro Nashville recovered 400 pounds of marijuna tracked back to Colorado, where medical marijuana has been legalized.

All three witnesses from the TBI testified their agency opposed the “Medical Cannabis Act.”

“Our conference stands in firm opposition to this bill,” Steve Crump, elected D.A. from 10th Judicial District and the Legislative Committee Chair for Tennessee D.A. General Conference, told the subcommittee.

While marijuana offenses would remain on the books under Tennessee law, “this bill would vitiate marijuana prosecutions in the state of Tennessee,” Crump added.

Crump also noted that the Denver D.A. noted in a letter that there was a significant increase in crime after the Colorado medical marijuana bill was passed into state law there.

He also referenced several times the fact that U.S. Attorney General Jeff Sessions has been clear about U.S. Attorneys enforcing the federal law regarding Schedule I drugs like marijuana, and that he sees this bill causing confusion for juries in marijuana cases.

Crump closed his testimony by referencing the case of the TBI agent who was killed during an undercover marijuana drug buy in Jackson, Tennessee.

He concluded by stating that marijuana is not a simple, innocent drug as it is often characterized

In an unusual move, Chairman Goins allowed the final testimony, at the request of Rep. Faison, to be given by fellow House member, bill co-sponsor and anesthesiologist State Rep. Bryan Terry (R-Murfreesboro). Rep. Terry read testimony about and from a young girl with intractable epileptic seizures successfully treated with medical cannabis who encouraged passage of the bill.

As previously reported by The Tennessee Star, Speaker Harwell revealed her support for medical marijuana after her sister, a resident of Colorado, sustained an injury and used the drug as an alternative to the prescribed opioids which she “had no doubt” would cause her to “become addicted to opioids.”

The bill will next be heard in the House Criminal Justice Committee. The bill has not advanced in the Senate since being referred to the body’s Judiciary Committee on January 24.

The summary of the “Medical Cannabis Act” bill can be read here.

The video of the Criminal Justice Subcommittee meeting can be seen here. The vote takes place at 1:40:00hr.