NASHVILLE, Tennessee–More than 500 high school student delegates from across Tennessee gathered in Nashville on Thursday to attend the first day of the 65th Annual Youth In Government General Assembly, a Tennessee YMCA Center for Civic Engagement program.

Susan Moriarty, executive director of the Tennessee YMCA Center for Civic Engagement, who, along with associate director Elise Addington Dugger runs the annual event, told The Tennessee Star that more than 2,500 Tennessee high school students in grades 9 through 12 participate in Youth In Government events scheduled throughout the year.

On Thursday, delegates met at the Nashville First Baptist Church. Friday, Saturday, and Sunday they will meet at the House Chambers, the Senate Chambers, and the Cordell Hull Building of the State Capitol.

The closing ceremony will be held at 11 a.m. on Sunday in the House Chambers.

Delegates are assigned specific roles, either as members of the General Assembly in the House or Senate, judges on the Supreme Court or lawyers arguing before the Court, lobbyists, members of the Governor’s Cabinet, or members of the Press Corps.

The 30 member press corps this year publishes two to three editions of the newspaper each day, as well as a daily video newscast, which is published to YouTube and is available on the cable channels of the hotels in which the students stay during the General Assembly.

Stella London, a student at Mt. Juliet High School, who was elected governor of this year’s Youth in Government General Assembly at the end of last year’s session, delivered the Governor’s Address to open the proceedings.

“In politically turbulent times like these, following the horrific mass shootings at Marjory Stoneman Douglas School in Parkland, Florida, it is more crucial than ever to see strong young people advocating for a better tomorrow,” London said.

“As we share insight into how to move forward, it is equally important to honor those who lost in this tragedy,” she continued.

“That is why I would now like to observe a moment of silence and reflection for those 17 young people. Please join me,” London asked her fellow delegates, as she bowed her head, and all 500 delegates joined her.

London then addressed the core of her message about the significance of Youth In Government.

“Youth In Government is the perfect place to begin shaping the world. And now, more than ever, we must recognize the power of our voices and our ideas,” she said, adding:

We are the ones who will change our reality.

Though it may seem small now, know that each and every one of you, first year delegate or fourth year veteran, is creating a pattern of change and influence on a much larger scale.

We are the learners of today and the leaders of tomorrow, and we are starting the change now.

One highlight of the schedule is the election of officers for the 2019 Youth In Government General Assembly. 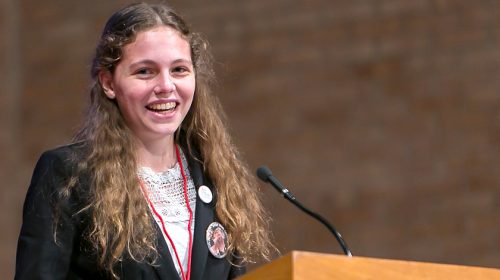 The electioneering began Thursday after the various candidates for office delivered their speeches to the assembled delegates.

Delegates featured on the ballot who spoke included the following: 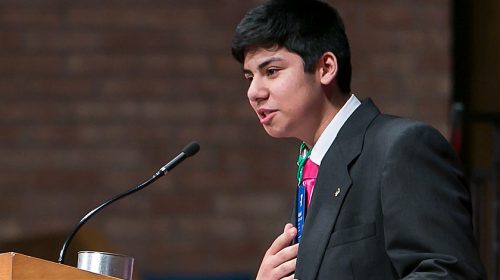 About 50 additional student delegates are vying for 17 other offices.

Father Ryan juniors Michael Lenahan and Thomas Marcum spoke with The Star about why they decided to become delegates to Youth In Government.

You can see the video of their comments here:

Three students from Central Magnet School in Murfreesboro also spoke with The Star about why they came to Youth In Government.

You can see the video of their comments here:

A second highlight is the deliberations among delegates in the House and Senate to consider passage of a number of bills which student delegate legislators have introduced.

Among the bills under consideration are:

A fourth highlight is the final Supreme Court case, in which the five members of the Supreme Court listen to arguments from both sides on the constitutionality of one of the bills passed by the Senate and the House.

You can listen to her comments here:

Students from high schools across the state, accompanied by their faculty advisors, are participating in the four day event.