The screening coincided with the opening of the 19th Annual Eagala Conference, which brings together more than 400 mental health and equine professionals for a networking and learning event around the Eagala Model of equine-assisted psychotherapy and learning. 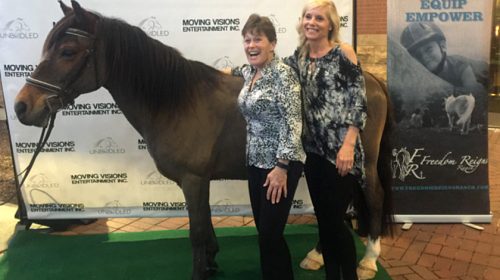 There was a meet and greet with the producer Christy McGlothlin in the hotel lobby followed by the screening of the movie. The screening was hosted in partnership with Candace Wade, author of the novel Horse Sluts and staff writer for Horse Nation, along with EQUUS Film Festival founder Lisa Dierson. Also in attendance on the “green carpet” was Carissa Ramsdell from Freedom Rance Reigns (a non-profit organization), and special guest, Pogo, a therapy horse from Thompsons Station, Tennessee.

EQUUS Film Festival founder Lisa Dierson stated, “The horses are healers, the horses have many things to do, many stories to tell.  The EQUUS Film festival is here to tell those stories.”

The award-winning motion picture Unbridled is set for nationwide Cinema release on Friday, April 27, 2018, to tell the real-life stories of a horse center that pair abused women with rescued horses, resulting in mutual healing.

Director John Ware says Unbridled captures the effectiveness of animal therapy and states, “There is some magic that happens when a broken girl learns that this giant animal is someone I can trust and it transfers to human relationships as well.”

The Freedom Ranch Reigns is hosting their own Unbridled movie screening/fundraiser on March 9 and 11.  Tickets for the fundraiser can be purchased here.