When the shy but active Darci Lynne asked her parents for a puppet when she was nine years old, her parents initially tried to discourage it.  However, they eventually reneged and gave her a “cheap” one for her 10th birthday.  She was fascinated with the dying art of ventriloquism because it was “so cool” that people could talk with their mouths closed.  She wanted to “wow” people like another ventriloquist winner on America’s Got Talent, Terry Fator and Miss Teen America contestant, Lisa Bonacquisti.

So even though she was already singing and doing gymnastics, with tips form Bonacquisti, she self-taught herself the skill and won Edmond’s Got Talent where she won first prize after a month’s preparation.  In 2015, she won first place in both the junior division at Oklahoma’s Got Talent and Oklahoma Kids and won Broadway, Specialty Acts, and overall Entertainer of the Year at American Kids in Branson, Missouri. In March 2016, Farmer made an appearance on Little Big Shots.

Then she asked her parents if she could try out for America’s Got Talent. They advised her that “the judges can be very brutal.” (As anyone who has watched Simon Cowell can verify.)  After the twelve-year-old shocked the world and herself by actually winning Americas Got Talent, she did a headline show at Los Vegas’s Planet Hollywood which sold out immediately.  She has since been on Ellen, the Today Show, and performed at Madison Square Garden and opened for Fergie on New Year’s Eve at Caesar’s Palace. 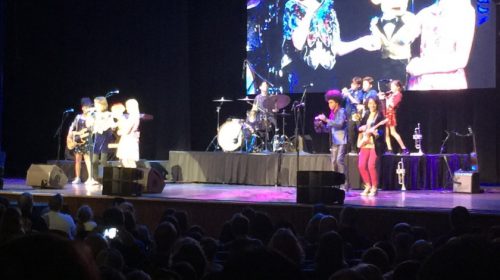 What sets Darci Lynne Farmer apart (besides the fact that she is so young) is her incredible singing voice (with and without her mouth closed) and her polished, impeccable skill as a ventriloquist. Recently Darci was invited to sing the National Anthem at the OKC Energy FC Soccer game where her fans heard Darci Lynne sing without a puppet.

Now signed with a talent agency and on her official first tour, Darci Lynne had an unscheduled performance at the Opry on March 9 followed two shows at the Ryman on March 10.  When asked about school, she advised that she still attends public school in Oklahoma, but she does often miss Thursdays, Fridays and/or Mondays. She is just “Darci Lynne” at school, she stated. The teachers do send her with work that she does as she travels from place to place.   When asked about Nashville, she stated: “Nashville is my favorite city so far because the people here are so nice.”

Joining Darci Lynne on our her initial tour are Little Big Shots and America’s Got Talent alumni, Pelican 212, a family band from Nashville, Tennessee.  They brought an energy to the event that was evidenced in their own Opry and Ryman debut. Darci Lynne joined the band (sans puppets) at the end of the show where they performed the Beatles’ “Getting By With a Little Help From Your Friends” for a perfect ending.

Even though Darci Lynne Farmer is unsure what she wants to do with her life as an adult, with her witty, family-friendly sketches and her unparalleled skill as a singing ventriloquist, we expect her to sell out shows for many years to come.