Republican State Representative Mark White(R-Memphis), who has made repeated attempts at passing a bill that would allow in-state tuition for illegal immigrants in Tennessee, was also the only member of the Tennessee General Assembly to promote and sit on a panel promoting pre-K.

Rep. White’s office sent out a “save the date” email to the entire Tennessee General Assembly regarding a public briefing on “the crime prevention, national security and economic and workforce benefits of investing in high-quality early education in Tennessee.”

The event, held on February 28 in the Old Supreme Court Chambers located in the State Capitol was organized so that members of Fight Crime: Invest in Kids and ReadyNation Tennessee could “discuss why Tennessee needs to preserve its investments in its youngest learners.” Both organizations, Fight Crime: Invest in Kids and ReadyNation Tennessee operate under the umbrella of Council for a Strong America, a “national nonpartisan nonprofit convening five powerful pillars of society to advocate for investments that ensure our next generation of Americans will be citizen-ready.” 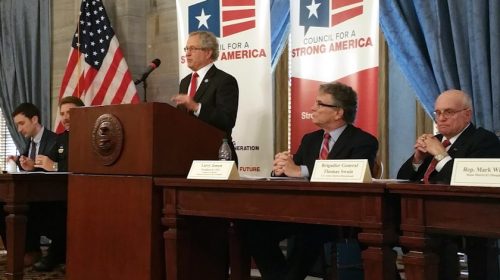 The invitation stated that “Fight Crime: Invest in Kids” is “a nationwide, bipartisan, non-profit organization of more than 5,000 police chiefs, sheriffs, prosecutors and violence survivors committed to research-based solutions that steer kids away from crime, will release its new report, ‘Pre-K Key to Cutting Tennessee Prison Costs and Boosting School Success.’”

Attended by about two dozen people, the event included a single legislator, Rep. Pat Marsh (R-Shelbyville) for a short portion.

The case to achieve the primary objective of increasing spending on pre-K was made through the introduction of Fight Crime’s newly released report entitled, “Pre-K to Cutting Tennessee Prison Costs and Boosting School Success,” with the subheading, “Tennessee can save $612 million by improving the quality of its pre-K programs and cutting crime.”

According to the 2016 State Preschool Yearbook by the National Institute for Early Education Research, Tennessee has had a Voluntary Pre-K (VPK) program since 2005, which is offered in 96 percent of school districts within the state. The total state spending on pre-K is $86 million, and of the 10 criteria on the organization’s quality standards checklist, the state meets nine of the current benchmarks, indicating that Tennessee’s VPK (TN-VPK) program is of high quality.

The widely cited August 2013 Research Report, “Evaluation of the Tennessee Voluntary Prekindergarten Program: Kindergarten and First Grade Follow-Up Results from the Randomized Control Design,” conducted by Vanderbilt University found that, in part, there is virtually no difference in those who participated in pre-K and those that didn’t, citing cognitive “achievement measures observed at the end of the pre-K year had greatly diminished by the end of kindergarten year and the differences between participants and nonparticipants were no longer statistically significant.” (emphasis added)

The report went on, contrary to proponents of pre-K, “The only exception was a marginally significant difference on Passage Comprehension with nonparticipants showing higher scores at the end of the kindergarten year than TN-VPK participants.” (emphasis added)

By the end of first grade, the only statistically significant difference between VPK participants and nonparticipants “favored the nonparticipant group on the Quantitative Concepts subscale,” found the study. (emphasis added)

In terms of non-cognitive achievement outcomes from first grade teachers’ ratings, there were “no statistically significant differences between the TN-VPK participants and nonparticipants on any of the scales for Social Skills, Work-related Skills, Preparation for Grade, Peer Relations, Behavior Problems, and Feelings About School.”

Vanderbilt’s research report did find that there was a statistically significant difference in nonparticipants being retained in kindergarten compared to participants at a rate of 6.2 percent to 4.1 percent, respectively.

The Fight Crime: Invest in Kids report, according the Associate Director, sought to address the issues outlined in the Vanderbilt study while seeking additional funding for the VPK program.

However, additional funding is contradictory to the information presented during the event and in the Fight Crime report.

Rep. White pointed to a poster-sized color-coded map depicting, “Average Test Score Growth Rates (Math and Reading Averaged), US Public School Districts, 2009-2015,” that he enthusiastically reported also hangs in Governor Haslam’s office. The map demonstrates that Tennessee’s average achievement growth in grades 3 through 8 is at least 1 to 1.05 grades per grade, which is the highest of all the surrounding states.

These growth rates are occurring despite the fact that, as reported by Fight Crime, Tennessee was one of seven states that decreased state preschool funding from the 2015-2016 fiscal year to the 2016-2017 fiscal year. Meanwhile 30 states that increased preschool funding in that same period, including Tennessee’s neighbors of North Carolina, South Carolina, Georgia, Florida, Alabama, Mississippi, and Virginia, and of the seven that kept the funding the same including Missouri and Kentucky, all had negative growth in average achievement in grades 3-8, thereby making a better correlation for less preschool funding for improvement of test scores.

Specifically, Florida and Georgia increased funding and have offered pre-K for a much longer time period than Tennessee, yet their schools are declining. When The Tennessee Star posed this reality as a question to Rep. White, he said that one of the answers to that is that “under the years of Jeb Bush, he was very focused as Governor on that,” and continued that, “the legislature pulled back and started reversing some of the things,” which, if he was referring to funding, is inconsistent with the Fight Crime report.

If the best argument in favor of pre-K, based on the Vanderbilt University study, is reducing the percentage of retained kindergarteners, the cost to retain kindergartners comes at a cost of $700,000 compared to the state spending of $86 million for the pre-K program.

As a businessman, Mr. Jensen was asked by The Star whether he would consider this a good return on investment, to which he responded that that missed the point of the “longitudinal piece” where the outcome wouldn’t be known for “probably 15 years from now.” Mr. Jensen made the connection that, without making the investment in kids that gives them “the soft skills, the basic reading skills,” and “the executive skills,” they’re behind, then in seventh or eighth grade they drop out and they go to gang, “and that’s their family.”

Jensen’s revealing conclusion was that, “We’ve got to create alternatives to that to stop that and then we create a way and over a long period of time we see a return on investment that does make sense and that return of human capital,” or, otherwise stated, the ability to perform labor in order to produce economic value.

While the Fight Crime report boldly makes the claim that the state can realize $612 million in savings by cutting crime and the cost of incarceration by linking an expansion of pre-K linked to improved graduation rates, the report cites no such studies conducted within Tennessee. The report does, however, reference studies from various preschool programs in Chicago, Pennsylvania, North Carolina, Michigan, and New Jersey, with information that contradicts that of the Vanderbilt Study conducted on Tennessee’s pre-K program.

For yet another, unrelated study devaluing pre-K, a Tennessee Comptroller’s report that predates the Vanderbilt University study, evaluated adjusted mean scores for pre-K and non-pre-K students in grades three through five in the areas of reading, mathematics, social studies and science. Without exception, third, fourth and fifth grade assessments for non-pre-K participants exceeded that of pre-K participants.

Perhaps even more notable, is that of the 16 total assessments evaluated by the Comptroller’s Office, the difference in 15 of the non-pre-K paticipants outperforming pre-K participants scores were considered to be “statistically significant.”