The parade was the final event of a week long festival of all things Irish in the community that takes it name from the Emerald Isle.

Participants and parade watchers wore green, the color long associated with Ireland, which is known for its lush green countrysides.

Houston County is a small rural county just west of Dickson County, the western edge of the Nashville Metropolitan Statistical Area, with a population of a little more than 8,000. Erin, the county seat, has a population of 1,300.

St. Patrick’s Day Parades in which politicians march have long been associated with large northeastern cities with large Irish populations dominated by the Democratic Party, such as New York City and Boston.

The first St. Patrick’s Day celebration in the United States was held in Boston in 1737, organized by the Charitable Irish Society.

Chicago, which began celebrating St. Patrick’s Day in 1843, adds a little flavor to the celebration by dying the Chicago River green each year on March 17. 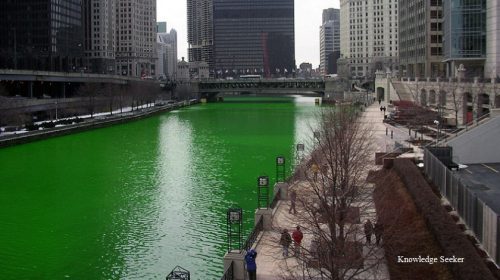 While most 19th century Irish immigrants settled in major northeastern urban centers, such as Boston, New York City, and Philadelphia, some also came to Tennessee, where they established small but thriving Irish communities.

Erin was apparently one such community. “The town was settled by Irish immigrants in the 1850s,” Clarksville Now reported.

“In 1863 the Tennessee settlement now known as Erin was just a few stores and a camp of Irish railroad workers,” according to IrishCentral.com:

In Erin legend has it that the Irish living there declared that “the hills and creeks reminded the Irish of their native Ireland and named their town Erin.”

According to Houston County’s Chamber of Commerce this is correct and “the clear creek, wooded hills and fog hovering over the West Fork of Wells Creek reminded them of the ‘Auld Sod’ of Ireland.” Today the town is also known as “Irish Town Tennessee.”

The railroad the Irish were building connected Louisville, KY and Memphis, TN through Houston County. The line was finished two days before the beginning of the Civil War and the town of Erin was featured on the official Federal Forces map. During reconstruction (following the war) the railroad built a depot, hotel and round house in Erin.

The Irish Day Parade and Arts and Crafts Festival has been held in Erin since 1963, when “O.S. Luton and Beverly Price conceived of the idea of a celebration of Erin’s Irish history and traditions,” as the Houston County Chamber of Commerce website notes:

They petitioned the Chamber of Commerce, other local leaders, and interested citizens to help in this endeavor. The focus of this annual event was to be the welfare, progress and promotion of the town and county. The local population went in the venture rather slowly. They liked the idea, but some felt it may be a bit too big for such a small body of citizens. However, the “Wearing of the Green” was a successful event that year and has continued each year to grow in interest and attendance. From the Grand Parade, Leprechauns and banquets to carnival rides, pageants and arts & craft booths, there is something for everyone. Relive the spirit of St. Patrick at one of the top ten celebrations in the United States!

From wee tots to wise old leprechauns, we have something for everyone. We invite you to join us in our celebration of heritage, family and fun! Don’t forget to wear green!

Join us on each year, as we celebrate and be Irish for the Day!!! This celebration is the culmination of week-long festivities. Held in downtown Erin, TN, our parade travels from the Houston County Middle School to the Houston County Community Hospital. A wonderful carnival is set up on Front Street. A plethora of food and craft vendors can be found in the Erin Square, Front Street, Spring Street, and Adkins Street, as well as entertainment on the Square Stage.

The state did, however, have a substantial population of “Scots-Irish” — Protestants who moved from Scotland to Ireland in the 1600s, and from Ireland to the United States in the 1700s.

Three of the most well known Tennesseans–all of whom became President of the United States during the 19th century–were of Scots-Irish heritage: Andrew Jackson, James K. Polk, and Andrew Johnson.

Early in the 19th century, Irish Catholics began to immigrate to Tennessee.

“By the 1820s Catholic parishes were popping up in Tennessee and during the 1840s there was an influx of Irish fleeing the Great Hunger. The ‘new Irish were seen as the poor laboring class,” IrishCentral.com reported:

Tennessee experienced a massive increase in the number of Irish people at the time. The Volunteer State had seventh highest percentage of Irish people of all the states. The Irish populations in Knoxville, Nashville and Memphis increased four-fold and “Irish towns” such as McEwen and Erin were established.

This period brought success for some Irish folk in the area. One example was Michael Burns from [County] Sligo who become the director of two railroads and banks and served in the state legislature.

Orphaned in Ireland, Burns emigrated to the United States, settling in Nashville in 1836, where he made his fortune. A Democrat, Burns served in the Tennessee State Senate, where he represented Davidson County from 1882 to 1890.