According to an email blast from Chief Information Officer for the Tennessee Department of Education Cliff Lloyd on March 6, the state’s online testing platform experienced more technical difficulties this week.

“The problem was related to a rogue process that was running in the data center where NextEra is hosted,” Lloyd said. “The problem was identified relatively quickly and the process was shut down, but unfortunately it did negatively impact about fifteen districts.” 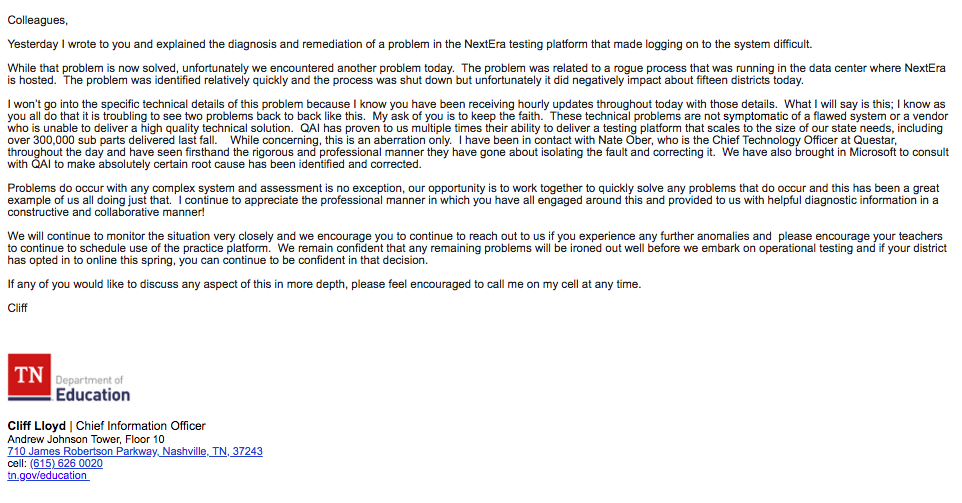 The email blast was sent to educators across the state as they tried to log into their state-mandated testing platform, but it wasn’t these teachers’ first report of problems from the department; in fact, it wasn’t even their first update this week.

“Yesterday I wrote to you and explained the diagnosis and remediation of a problem in the NextEra testing platform that made logging on to the system difficult,” Lloyd wrote earlier in the email. “While that problem is now solved, unfortunately we encountered another problem today.”

From the original vendor failing to create a functioning testing platform to thousands of tests being incorrectly scored to classes not receiving their test results at all, TNReady’s state-led implementation has been under criticism from the beginning.

“These technical problems are not symptomatic of a flawed system or a vendor who is unable to deliver a high quality technical solution,” said Lloyd.

For some teachers and especially directors of schools, this tone sounds eerily familiar to the reassurance they received before TNReady’s initial failures.

Closer to home for some directors of schools, they are feeling the heat from other shortcomings of the department. TDOE has held 80 school districts accountable for not testing student that were considered “exceptionally special.”

In response, many special education teachers start training on how to test their students on computers this week.

The test is called the MSAA (Multi-State Alternative Assessment), and all third through eighth grade students that do not take the TCAP will be required to take this test. These students include the lowest level of disability such as Down Syndrome, all forms of autism and other to the intellectually impaired disabilities.

With another new online test for that group, some administrators are still trying to get the department to track down the lost test scores for entire classes.

“What we’re doing is driving the teachers crazy. They’re scared to death to teach anything other than get prepared for this test. They’re not even enjoying life right now. They’re not even enjoying teaching because we’ve put so much emphasis on this evaluation,” said State Rep. Jeremy Faison. “So I think you’re going to see movement in the legislature this year to detach the evaluation portion of the TNReady test from the teachers and the students.”

According to the Commercial Appeal, “About 9,400 TNReady assessment tests across the state were scored incorrectly, according to the Tennessee Department of Education. The scoring issue affected about 70 schools in 33 districts.”

In late 2017, House Speaker Beth Harwell called for hearings to determine why over thousands of tests were inaccurately scored across the state.

This prompted the creation of an Assessment Task Force, led by DOE Commissioner Candice McQueen.

McQueen lead the charge to implement TNReady, and it is unlikely she would ever give up on the test, despite its issues.

Despite making education her niche issue on the campaign trail, Harwell does not serve on the task force. Its creation put Harwell’s name in the headlines for a few weeks, but since then it’s been business as usual at the legislature with no accountability on TDOE but plenty on teachers and educators across the state.

Harwell’s biggest support for educators seems not to come from classroom experience or listening to teachers, but instead from the $33,000 in donations the last 5 years she accepts to her campaign and PAC from the Tennessee Education Association. Only two candidates for Governor have taken money from the TEA Harwell and Fitzhugh.