A group that is opposed to the $9 billion light rail transit plan is making waves on social media. 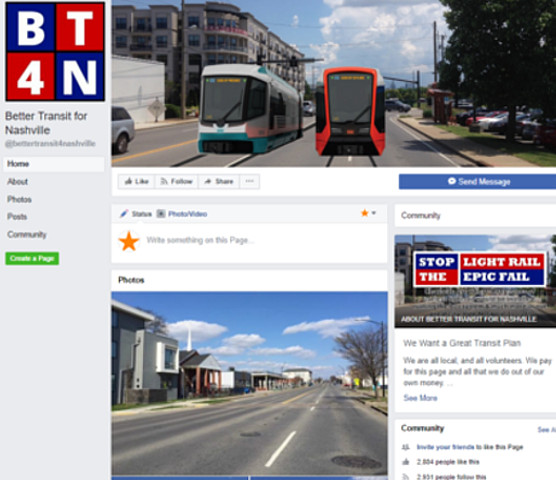 BTN’s popularity may be due in part to its running the numbers on the light rail plan’s alleged drawbacks. Nor is Facebook the only social media platform BTN is using effectively. Its YouTube page has posted a number of videos laying out details such as this: “In 2.5 years, (ex-Mayor Megan) Barry spent $2.4 million on frills, bodyguards & her love affair. The video has all the data. Now she wants to spend $8.9 BILLION for a transit plan that directly serves the rich & only 2% or less of commuters. The plan will spend $568,000 per current transit rider.”

The group contends light rail will benefit the owners of downtown properties along the rail corridors: “Their corp./businesses will increase in value due to artificial govt. economic boost to ‘transit.’ Their land values near LRT/BRT will increase artificially. They will continue to get business from Metro’s $2+ billion annual budgets.”

Another BTN video points out, “Megan Barry’s Metro govt has spent at least $243 million more than Metro’s revenues. In her first 7 months in office, she spent $1.28 million adding cosmetic changes to the mayor’s office, without any announcement about the project. Some of the changes: sliding glass doors, ergonomic work stations, refurbished receptionist area, new paint. The purpose was to create a ‘more modern, open and transparent working environment.’”

BTN says, in its newsletter, that Transit for Nashville has $2 million to push for the transit plan, while the opposition group has “a few thousand.” However, Better Transit for Nashville appears to be getting more bang for its buck as it reports polls show those opposed to and for the plan are about even — but 30 percent of those polled are undecided.

BTN also points to an outside group that is presenting alternative plans: “Group Plan B Nashville is presenting mass transit alternatives. Learn more on their website and FB page. Plan B website: http://nashvilleplanb.com/”