Edmund Burke once stated, “Those that do not know their History are Doomed to Repeat it.” Dr. George Smith knew his history and he certainly didn’t want others to repeat it. Dr. Smith had a love for Tennessee history and telling those old stories, but most importantly he had a love for his fellow man. He was one of the kindest gentlemen I have ever met with a ‘Christlike Coolness’ about him. 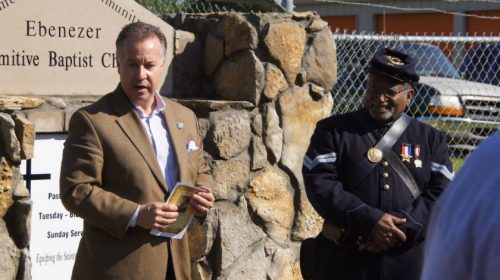 Ironically, right after my efforts last year in the Tennessee General Assembly to recognize our ‘Tennessee’s Rich History’ I was invited by Frank Caperton, President of the Historical Society to attend the African-American Heritage Society of Rutherford County event. The resolution created a stir of controversy, the media tried to paint me as a prejudiced Republican lawmaker (The media never mentioned the fact that I was the only Republican in our state’s history to stand alongside the black caucus due to the young 6-11-year old Hobgood school children who were handcuffed and arrested). The resolution mentioned the life of Sampson Keeble, our state’s first black state lawmaker who was from the Old Jefferson community, which once was a small town just outside of Smyrna and it mentioned the life of General Nathan Bedford Forrest.

Being born and raised in Smyrna, I was never taught the story of Sampson Keeble or had I heard about Forrest giving a remarkable speech near the end of his life when he was invited in 1875 to address a meeting of the Independent Order of Pole Bearers, an early black civil rights organization in Memphis. I then read where Forrest had over 3000 African-Americans to attend his funeral, needless to say I was extremely intrigued by both men’s stories and wanted others to know as well. My thoughts were that maybe our society would be better off if our community, both black and white knew both of those men’s stories.

When Frank invited me to join the event I was already scheduled to attend the MTSU graduation and Randy Boyd who is running for governor was the commencement address speaker that same Saturday. Oddly enough, I chose to attend the black history event. Needless to say, it was an odd feeling knowing that the media was giving me a hard time for simply trying to bring awareness to important elements of our state’s history that are never spoken about.

I arrived at Ebenezer Primitive Baptist Church, a beautiful historic church that reminded me of the small quaint church on the Little House on the Prairie. The event started with a walk to the newly completed fieldstone sign, other than Mayor Ernest Burgess and Frank I was one of the few white folks at the event. As we were walking we sang a few hymns and ended with one of my favorite hymns ‘Amazing Grace.’ After we sang the old hymn Dr. Smith spoke a few words and then looked over at me with his kind smile and asked “Rep. Mike Sparks will you say a few words.”

I was pleasantly surprised thinking that he may be upset with me believing the false narrative that the media had portrayed about my efforts. I mentioned to the crowd that history was very important to us all and that the old hymn we had just sung was written by John Newton a former slave ship captain who influenced a British lawmaker named William Wilberforce to end slavery. I had shared that Newton had a redemptive story and how God used him to help abolish slavery in Great Britain. Later that day as President Mary Watkins spoke she stated, “thank you Rep. Sparks for bringing awareness to the life of Sampson Keeble, maybe if young people today knew their history we wouldn’t have the problems we have today.”