Mayoral candidate Erica Gilmore, who currently serves as one of the five At-Large Metro Nashville Council members, has pulled her support from the $9 billion transit plan proposal, “Let’s Move Nashville.” 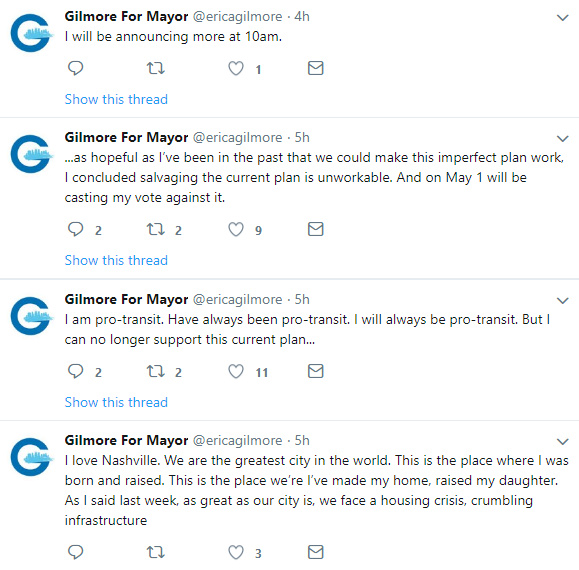 The announcement of her major policy shift first appeared as a series of tweets early Monday morning:

“I love Nashville. We are the greatest city in the world. This is the place where I was born and raised. This is the place we’re I’ve made my home, raised my daughter. As I said last week, as great as our city is, we face a housing crisis, crumbling infrastructure,” she wrote.

“…as hopeful as I’ve been in the past that we could make this imperfect plan work, I concluded salvaging the current plan is unworkable. And on May 1 will be casting my vote against it,” Gilmore added.

She concluded, “I will be announcing more at 10am.”

At around the 10 o’clock hour, Gilmore arrived to deliver her prepared remarks about her no longer supporting the transit plan proposal. After introducing a handful of supporters sharing the stage with her, she said:

I wanted to share, from talking to citizens like these, I think a new clarity on the path to building a better, more progressive Nashville.

This is why I’m running for mayor.

This means building a city where every community has access to economic opportunity, and the government prioritizes the protection of people who may be left behind.

We have a need for greater mass transit to grow our city and to create equitable development.

In 2014, Anyah and I went without a car for a year in Nashville. We were downsizing and living downtown. We walked blocks to our city grocery store; we hopped on the bus, we hopped off the bus; we got on the bike when it wasn’t raining. We spent a fortune on Ubers to avoid being late to City Council and to school meetings.

I’ve lived the gaps in our current system, and I’m keenly aware that many in our city don’t have the means or access that I did.

I spent my entire career in public service finding solutions to our long commute times. To devise transit options that work for the poor who cannot afford to buy a car. I’ve also worked to lower our city’s carbon footprint and greenhouse gas emissions by expanding greenways and also modes of transportation.

I’ve also been a lifelong advocate for transit justice, for fair treatment, and doing the right thing for all our citizens – no matter their zip code, the language they speak, or the circumstances of their birth.

These are the priorities I will continue to advance as your next mayor.