The Polk Foundation announced Wednesday that a substantial $3,000 scholarship has been added to The Tennessee Star Constitution Bee Grand Champion prize package will be provided by the Andrew Woodfin Miller Foundation. Set to be held Saturday, April 28th, Constitution Bee’s scholarship prize is in addition to the trip to Washington, D.C. for the winner and a parent.

The Andrew Woodfin Miller Foundation Scholarship will be awarded to the first place winner at the April 28 Constitution Bee and can be used for college tuition or any expenses related to college or post-secondary education.

The Tennessee Star Constitution Bee will be held in Franklin, Tennessee beginning at 9 a.m. on Saturday, April 28 at the Williamson County Administration Building. All secondary students, whether enrolled in public schools, private schools, or home school programs, in grades 8 through 12 are eligible to participate.  Students can sign up for the event here.

April’s event is a follow-up to Tennessee’s first-of-its-kind statewide Constitution Bee held last September 23, where a total of sixteen students vied for the Grand Championship. 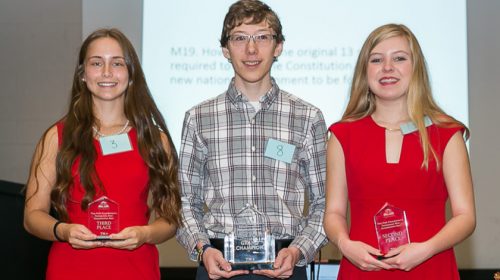 The Tennessee Star Constitution Bee is a part of The Polk Foundation’s Constitution Project, an initiative to teach secondary school students the cornerstones of American liberty: the US Constitution, the Bill of Rights, and all the amendments.

1. The publication and free distribution of an original book, The Tennessee Star Guide to The Constitution and The Bill of Rights for Secondary School Students to teachers and secondary school students anywhere in the state who sign up to participate in the 2017-2018 academic year Pilot Project for use as supplementary material for eighth grade Social Studies, high school U.S. Government and Civics, American History, and political elective classes.
2. The development and distribution of support materials based on the popular Constitution Series by The Tennessee Star for teachers, students, and adult volunteers.
3. Training on its implementation in the classroom by teachers and in review sessions by adult volunteers.
4. The first-of-its-kind Constitution Bee for Tennessee secondary school students, to be held in Pleasant View on September 23.

Details about the unique project – including three full chapters of the book – are available for review at the Polk Foundation website: http://polkfnd.com.

Secondary school students from across the state are invited to sign up for the April 28 Constitution Bee, which will be held at the Williamson County Administration Building in Franklin, Tennessee from 9 a.m. to 2 p.m. here.

“It is vital that we rediscover the importance of our Constitution and pass it along to the next generation. We think a Constitution Bee is an important step to encourage that effort.” J. C. Bowman, executive director of the Professional Educators of Tennessee added.

All confirmed contestants receive – at no charge – a copy of the pilot project edition of the textbook based on the groundbreaking Constitution Series, The Tennessee Star Guide to the Constitution and the Bill of Rights.

Top performing students at each grade level (8th, 9th, 10th, 11th, and 12th) will each receive a prize package and be featured in profiles at The Tennessee Star.

The student who wins the Grand Prize Championship as the top secondary school student in the state with receive an all-expenses paid trip to Washington D.C., along with a parent, plus a $3,000 scholarship to apply to the first year’s expenses to the winner’s college or trade school of choice after high school.